Sanity Returns? Flipkart Backtracks on App only Strategy; Brings Back the Mobile Website

Flipkart had piloted an App only strategy a few months back, and had even started making few categories exclusive to the mobile app. This move was deemed by many (including us) as a desperate measure to forcefully push the customers to mobile apps. This app only approach was severely ridiculed and Flipkart now seems to have backtracked their steps and has offered a light version of the website on phones. 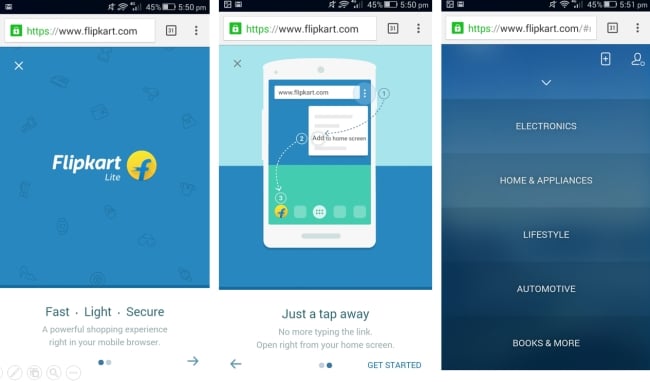 The webapp is pretty different from both the mobile app and the desktop site when it comes to the UI, and looks to be completely redesigned. Nevertheless, the mobile website seems to be slick and doesn’t need buyers to install the mobile app anymore. Myntra is yet another etailer who made the shift to an app only medium and it seems that Flipkart was more of testing the waters, and it’s now evident that the entire exercise somehow didn’t go well.

The navigation of the Flipkart Mobile website is smooth and it was pretty fast even when I tried to browse on a 2G connection. The categories are stowed at the bottom and can be accessed by swiping up, unlike the mobile application in which you would need to swipe from left to right in order to reveal the categories menu pane. The overall experience with the mobile website was without any hitches, the filters, categories and cart all worked as they were supposed to.

The app only strategy had to backfire since unlike other hyperlocal delivery services and cab hailing apps, Flipkart doesn’t make extensive use of the mobile sensors. The cramped real estate of the mobile screen somehow hindered the shopping experience and personally, I had to be extra cautious while ordering items. So just imagine the plight of other nascent users. Another complaint I had, or still have with the app is the space it takes, suppose I shop online at fifty odd destinations it becomes cumbersome for me to install all the apps and block a major chunk of my phone memory and the processing prowess it would require. This effect would appear to be further pronounced in entry level smartphones which offer a relatively lesser internal storage for apps.

It is very likely that Flipkart had deployed the app only strategy in order to target the customers in a better way and more importantly strengthen their Economics by reducing the affiliate sales, to think of it, with an Mobile app Flipkart can beam unlimited free advertisement for the users after taking into account several aspects including the location, buying pattern and the browsing history. The App-only strategy might have been envisaged to eventually help them to ramp down the marketing efforts and also the extra burden of maintenance for for the mobile website.

However, Annkur Agarwal from PriceBaba has an interesting theory that the sudden backtrack might be due to the fact that Google has revamped its search algorithm with a penalty on App Install Interstitial. The new rules says that “Starting today. Ages with an app install interstitial that hide a significant amount of content in the transition from the search result page won’t be considered mobile-friendly.” This makes sense since Flipkart didn’t have a mobile website and if the entire traffic was routed to the App it would negatively impacted their search rankings.

We just hope that Flipkart will return back to normalcy and they also stop making offers exclusive to mobile apps.

Update: Flipkart has detailed how it achieved the new web app on mobile, but no explanation on why they backtracked from App-Only strategy. We have written to Flipkart for explanation, and will update if we hear back from them.

Skullcandy Push Review: Pushing the AirPods...only to be…
The Snapdragon 480 Mobile Platform Brings 5G to Affordable…
Handing your phone to a friend? Make sure they can use only…
Want the iPod Classic Back? There’s an app for that!
How to use Back Tap on iOS 14 to launch Google Assistant (or…
Amazon Echo Auto Brings Alexa to Cars in India for Rs 4,999