Apple never seemed to be that interested in making the accessories for the iPhone themselves, or we thought so. In a rather unprecedented move, Apple has announced an external battery case for the iPhone 6s called the iPhone 6s Smart Battery Case. The company claims that this will increase the battery life of your iPhone 6s by 25 hours but they seem in no mood to reveal the battery capacity. 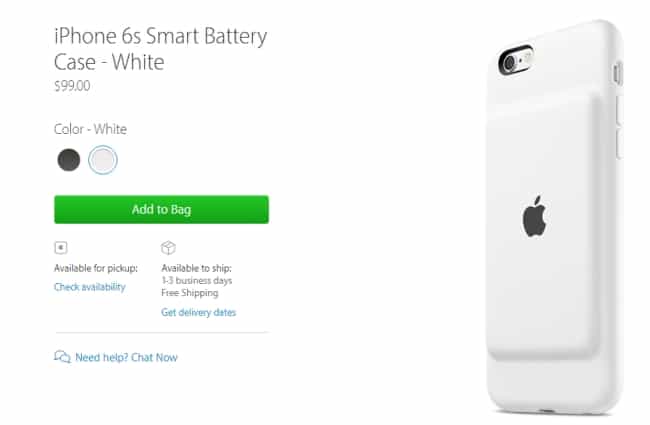 The battery case is made up of silicon and the material is similar to the other traditional cases. The case uses a lightning male port at the bottom to plug in the iPhone and the case can be in turn charged with the usual traditional Lightning cable, unlike the other third party batteries which usually come with a microUSB port. The good part however is that the case is expected to work with even the iPhone 6 but as of now we couldn’t see the battery extender for iPhone 6s Plus or the 6 Plus.

The battery case is definitely going to affect the aesthetics of your iPhone. If you thought that the protruding camera unit in the iPhone 6 and the 6s stuck out like a sore thumb wait till you see the hump created by the battery case. It sort of adds an additional slab but still ensures that all the buttons work as usual.

The question that’s boggling us down is the fact that from when did Apple become interested in accessories, a fair point considering that there was never a dearth of quality accessories for the iPhone. But then, the iPhone is not the first Apple device to get in house accessory as the Apple Pencil, Keyboard, Touch Pad, Apple Watch Dock and the mouse have been launched in the recent past. It seems that Apple might be having a thick margin for these accessories and it wants a share of the profitable accessory market as well. Buyers tend to prefer the official accessories considering the price difference between the quality third party accessories is not too wide. The iPhone 6s Smart Battery case will be available in both Charcoal Gray and White colours and will be sold for $99 on the Apple Website.

TechPP is supported by our audience. We may earn affiliate commissions from buying links on this site.
Read Next
The Wanle Playable Case for iPhone is a Blast from the Past
#iphone 6s #iPhone 6s accessories