InFocus, the American Telecommunications giant sees the Indian market space as a world of possibilities for its smartphone business and has been bringing in some good offerings in many different price segments and the good news is that they’ve been quite successful with couple of their phones – remember, as a new entrant it is very challenging to make sales in this heavily crowded space where the buyers are spoilt for choices with the aggressive pricing of most of the phone makers. Speaking of crowded spaces, the 5.5-inch budget phablet space has tons of options with some long standing winners like the Yureka Plus, the Lenovo K3 Note and the newcomer Coolpad Note 3. Trying to make a dent here will be a new offering from InFocus – the M680.

Budget phones normally come loaded with good specs but take a hit in the design and choice of build material. Not the case here – the M680 has a good metallic frame going around it and the edges are neatly curved off, and a contour we fell in love. Chamfered edges all through and a metallic back with the InFocus logo studded shines out. The power and the volume rockers on the right and left side of the phone respectively are well placed while the speaker grille at the bottom is not. We will tell you why in a while. Blame us for having a keen eye for details but the back of the phone has three sections to it and when you swipe your fingers you can tell they are not on the same plane, telling you of some compromise in the process. Barring that, the overall design has some work going into it and the frames hold the contents “intact”. We got the rose-gold color which infact has some good looks. 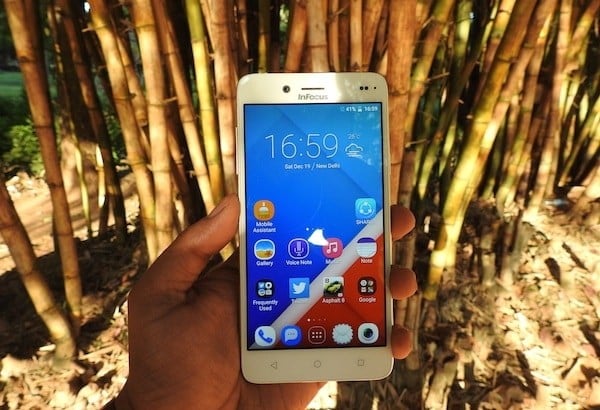 The goodness doesn’t end there. M680 comes with a 5.5” Full HD screen packing 401 pixels per inch. Screen is bright enough even at lower settings and good viewing angles. Under the sun is where it gets pretty reflective but thanks to the max brightness being very bright, makes it easy to read the screen. Touch response impressed us and is one of the best we’ve seen in a lower mid-range phone. Sadly, the trio of capacitive buttons don’t light up and your fingers will take a while to get memorise the positioning.

Lighting up the user interface is the InLife OS built off of Android 5.1 Lollipop and we are told the Marshmallow update will follow in the coming weeks. InLife tries to stick to the stock Android experience but brings some handy features into the game. Icons are well colored and shaped and the transitions are snappy – thanks to the combination of Mediatek MTK 6753 Octacore SoC accompanied by 2 GB of RAM and 16 GB of internal memory that can be bumped upto 64 GB if so desired. The app drawer has options to sort the apps alphabetically or the way you want it to or allow it to sort it based on the one you frequently use. If that is not enough and you are a app-o-holic, there is a search feature that works very well and fast. Swipe down from the top while on the home screen and the options toggle menu shows up, housing tons of entry points and you are allowed to reposition them based on your preference. Preloaded apps to use the task manager, Mobile Assistant coming with options to manager permissions and clean ups, cool widgets and wallpapers find their way into InLife. We had some 20 apps in the task manager and the M680 showed no signs of struggle or lags. Overall the UI performance is good, with AnTuTu benchmarks hitting 37070. 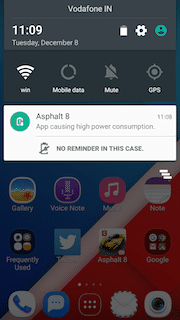 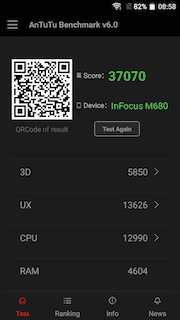 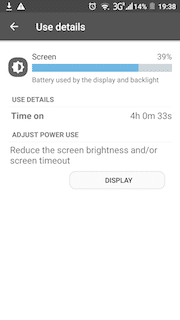 Big screen would generally lead most of us to watch videos and game. M680 does just OK when it comes to gaming. Asphalt 8, Mortal Kombat, Riptide GP2 were playable for elongated periods of time but all of them saw occasional stutters which clearly indicated that InFocus has gone in for some throttling to control the temperature soaring high. The back of the phone and the metal frames around the phone did warm up but there was no overheating issues encountered. After 90 minutes, the metal frames made us uncomfortable enough, to pause gaming for a while. The speakers at the bottom get fully blocked by your hands when in landscape mode. You either have to adjust your palms or move to upside down landscape to set this right. 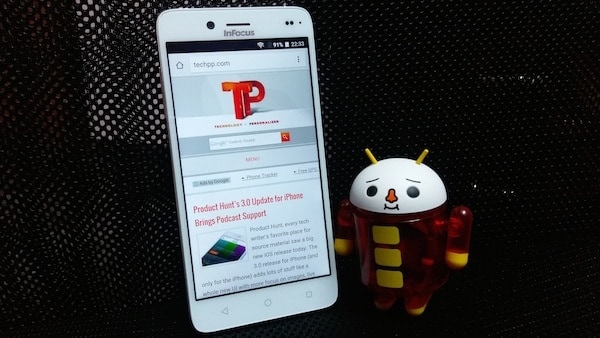 So how does the battery hold up you may ask – sadly, not well enough. Within the first 10 minutes of gaming, the M680 splashed a warning that the battery has started draining faster than normal and we lost close to 40% with 90 minutes of gaming. With moderate use of the phone, we were able to hit the end of the day with less than 10% battery left and around 4 hours of screen on time, with 4G connection. This is where we wished the M680 came with a 3000 mAh battery (at least) – the phone is big anyway and it wouldn’t have hurt much.

Where the M680 wont hurt you at all is the camera – both front and the back come with 13 MP auto-focus shooters and they do an excellent job. A basic camera app locks the focus fast enough and processing the image is likewise. Daylight and macro images are crisp with very good dynamic range. The cameras held their own in indoor and low-light conditions too – exposure was handled well and there was not much of noise. Videos come out decently well but won’t blow you away. Note that all of these comments hold good when we are talking of the cameras in the budget-range phones. 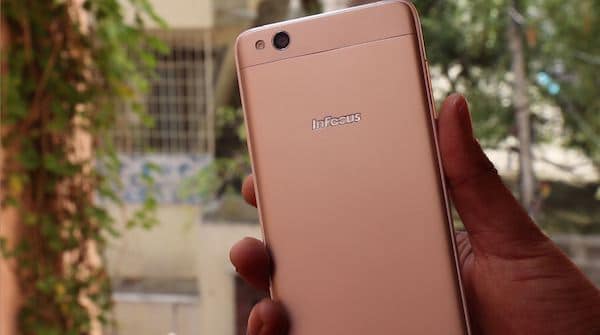 In our first impressions, we mentioned that we were impressed with the display, the InLife OS and the camera and those impressions stay intact. We see a very honest effort from InFocus here – be it the design of the phone, metal elements in the build, unique camera offering in the price range or trying to fix software issues. There was some call drop issues that led to random reboots while on the move and this was fixed via an OTA update we got. All of this instils faith in the brand. But the lack of a good battery performance is what will make it very tough for the phone to take on its competition – the likes of Coolpad Note 3 which saw screen on times averaging around 5-6 hours, tons of options in the software and coming at a lesser price as compared to M680 coming at Rs 10,999. Xiaomi’s Redmi Note Prime too is another phone you may want to consider but the build there is rather cheap. If you’re looking for well finished, shiny metallic phone and not a heavy user, the InFocus M680 will keep you happy and delighted most of the times. InFocus is moving in the right direction but there are quite a few lessons to be taken in for the next move, if hopes of squarely beating the competition are to be kept alive.

Time for Brands to be Honest about Rebranded Products?
Ojoy A1 Kids Smartwatch Review: Freedom for Kids and Peace…
OnePlus 7 Pro Camera Review: Not quite settled!
Google Pixel 3a XL Review: How Much for that Camera?
Honor 20 Review: Looking to Unsettle OnePlus
Honor 20i Review - Good Cameras Let Down by Average Chipset