The Freedom 251 Phone: From Celebration to Suspicion

For those who have just arrived on the planet, Freedom 251 is the name of a phone that was unveiled at a staggering price of Rs 251 (that’s less than USD 4), making it easily the cheapest (in terms of price) smartphone ever. And it delivered a fair bit of bang for less than four bucks: a 4.0-inch qHD display, 1 GB RAM, a 1.3 Ghz quad core processor, 8 GB storage, a 3,2-megapixel rear shooter, 1450 mAh battery and Android 5.1 running on top of it all. Initial rumours pegged the price of the device at Rs 499, but yesterday it was revealed at almost half that much – for Rs 251. 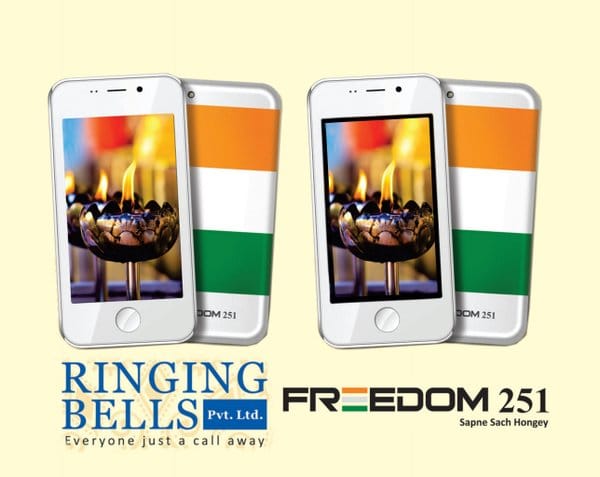 On the surface, that should be reason for celebration in a country in which the vast majority of users still use feature phones and find even a Moto E (which costs around Rs 4,999, or around USD 80) well beyond their means. And the initial reaction to the Freedom 251 was indeed one of (pleasant) shock and awe. There were whispers about the Indian ability of Jugaad (basically work your way around something in not the most ethical, and yet effective manner) coming to the fore and much chanting of the magic mantra of Made in India in Indian geek lobbies.

And then it all began to unravel.

For, if Ringing Bells, the manufacturers of the phone had struck the right note by coming up with perhaps the lowest price ever charged for a smartphone in tech history, they then proceeded to commit what one can only call a series of gaffes in that highly underrated part of marketing: communication.

Some of our colleagues in the media had got the device before the launch, which was scheduled in the evening. And that was when the gloss – literally – began to come off the phone. Some of the units received by the media had what seemed like a bit of whitener above the display. Removing this white substance revealed the name Adcom, which is actually another Indian phone manufacturer. Within a few hours, there were people saying that the device was actually a rebranded version of a phone called Adcom Ikon 4, which is being sold on Flipkart for a price in the vicinity of Rs 4,000. Some also pointed out a striking resemblance between the UI of the phone and that of Apple’s iOS, with some icons seemingly being the exact same.

Now, by itself, neither was a major issue. No one would complain if they got a phone that cost Rs 4,000 for less than seven per cent of its price, and stories of companies getting ‘inspired’ by Apple’s UI are stuff of tech legend. Yes, the attempt to cover the brand name would have struck some people as odd, but it was not the first time they had seen a phone being rebranded – and well, what’s to complain about if the consumer benefited so massively by it?

No, the real problem has been that of communication. It is a field in which the Ringing Bells spokespersons have not really been all too convincing. The Adcom issue was handled well enough by saying that even if there were design similarities, the devices’ innards were very different (evidently Adcom itself knows nothing of the matter). But saying that Apple had not copyrighted iOS icons was a bit naïve – the Cupertino company has so far not reacted (perhaps they are too stunned by the claim or are too busy laughing – we strongly suspect the latter). The fact that there was not even an official press release about the launch handed out at the event was also a matter of some surprise.

Then there is the little matter of the pricing. The spokespeople of Ringing Bells have insisted that the phone (which has the Indian tricolour on its back) has not been subsidised by the Government, but that economies have been derived from manufacturing in India, economies of scale (we hear that the phone will be manufactured in a number of factories and that the company is looking at selling phones by the million), allowing others to sell from its own e-commerce site, and by selling online only (saving on retail and distribution costs). The problem is that as per most of our sources, at the time of writing, the math simply does not add up. India’s mobile industry body has written to the telecom ministry on the matter, pointing out that it was impossible for a company to offer a 3G phone for under Rs 2700 and remain sustainable. Some of our sources also say that it would be impossible to handle the kind of volumes the company is talking of under an online only model. Cynics, meanwhile, have been quick to point out that if the phone is available only online, it will be out of the reach of its core target audience – the underprivileged in India have very little Web access. The fact that the company’s website seemed unable to handle traffic or process orders when booking for the phone today has not exactly strengthened the company’s case of making money off its e-commerce platform.

All of which has pretty much dampened the enthusiasm which accompanied the initial launch of the Freedom 251. Indeed, there is now suspicion that the company might not be able to deliver on its promise, and the spectre of the super-affordable-but-difficult-to-get Aakash tablet has been raised by many.

We have not seen the device yet, so we are not drawing any conclusions about it. But yes, we do wish there had been more communication from the company both in terms of clarity and detail. The world’s most affordable smartphone surely deserved it.

How to Block Full-Screen Ads on Your Android Phone
Asus ROG Phone II Review: Tough to go Wrong with this One!
Redmi Note 8 Review: Best phone below Rs 10,000. Period.
[Deal] A high-end Gaming Phone at 24,999 - not a dream!
WWDC 2020: Is the phone finally going to be THE computer?
Asus ROG Phone 3 Review: It's All About the Numbers!