There have been no dearth of rumors surrounding HTC’s upcoming flagship smartphone, the HTC One M10, which apparently will just be called HTC 10. But today, there were multiple leaks from two of the most prolific leakers – Steve Hemmerstoffer (@onleaks) and Eval Blass (@evleaks) – revealing almost everything about the device several weeks before the launch. 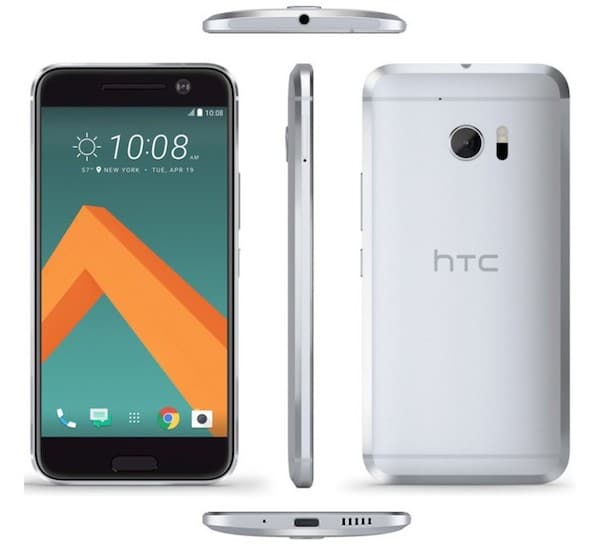 HTC has been teasing the new looks of HTC 10 (no more One M moniker, it seems) for a while now, and the new leaked images prove just that. The press render above shows off the phone in every possible angle. Importantly, we can see the USB Type-C on the bottom surrounded by a single bottom firing speaker. So no more front firing Boom Sound stereo speakers on the HTC flagship.

The back is still all metal and rounded, but it looks nothing like its predecessors. The HTC 10 carries chamfered edges on the sides of its back, something HTC has been teasing with their #PowerOf10 campaign on social media. The big ass HTC branding on front is now gone, and replaced by Samsung like rectangular home button/fingerprint sensor on the front flanked by back and multitasking capacitive keys on either sides. The device looks like a cross between the HTC One A9 and One M9 with Samsung touch thanks to the home button on the front.

Also, according to @onleaks, the prototype phone above has a 5.15-inch QHD display, Snapdragon 820 processor with Adreno 530 GPU, 4GB RAM, 12MP camera, and USB Type-C port. HTC has been boasting about its camera for a while now. Apparently, the sensor carries a big pixel size, but we don’t have any real information on that yet. Thankfully, there’s still something to look forward to the launch, which we still not sure when it will be. But @evleaks says that the US retail of HTC 10 will happen in the week of May 9th, which is more than two months away!

Was this article helpful?
YesNo
TechPP is supported by our audience. We may earn affiliate commissions from buying links on this site.
Read Next
OnePlus 8 and 8 Pro Specifications Leaked
#HTC 10 #HTC One M10 #leaks