It is not often that you end up getting two Android flagships that seem cut from cloth that is largely similar and yet rendered into garments that are utterly different. The latest flagships from Samsung and Xiaomi can claim to be that. We have had both phones for a few days now, and yes, if we had a penny for every time we picked one up thinking it was the other in the initial period of possession, the old bank balance would be a darn sight healthier – yes, and this is in spite of the fact that one of the devices was black and the other white, and that one has a USB Type C port and the other a more routine micro USB one. 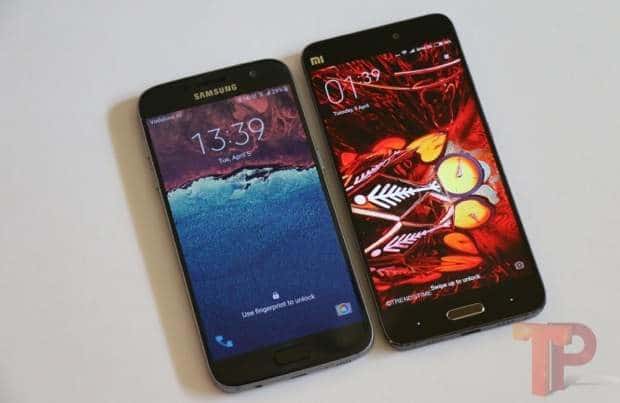 The reason for this confusion stems from the fact that in terms of overall shape, both devices do bear more than a passing resemblance to each other. Viewed from in front, both come with almost identically sized displays (5.10 inches on the S7, 5.15 on the Mi 5), with an earpiece, camera and sensors above it; and a slightly elliptical front facing fingerprint sensor-cum-home button flanked by two touch buttons next to it. Both phones have rounded corners and are not too different in terms of size: the S7 has proportions of 142.4 x 69.6 x 7.9 mm, while the MI 5 is slightly longer but slimmer and is almost of the same width at 144.55 x 69.2 x 7.25 mm. Flip the phones around and you are faced by twin Gorilla Glass 4 backs, which gently slope towards the sides, although the location of the cameras is different (in the upper central part of the S7 and towards the left upper edge of the Mi 5). Top that off with sides that are metallic and the similarities at first glance attain almost surreal status.

A closer look will, however, reveal differences. The Mi5 has the power and volume buttons on the right and only has the SIM tray on the left, while the S7 has opted to place the SIM card tray on the top, the volume buttons on the left and the power/display button on the right. Both devices have noise cancellation microphones on top (while only Mi5 has the Infrared port), and USB ports at the base flanked by a speaker – the Mi5 uses a Type C port while the S7 has a more conventional micro USB one. The Mi5 also has the 3.5 mm audio jack right on top of the device while the S7 has it on the base. The buttons on the Mi5 also have a slightly sharper texture than the ones on the S7. 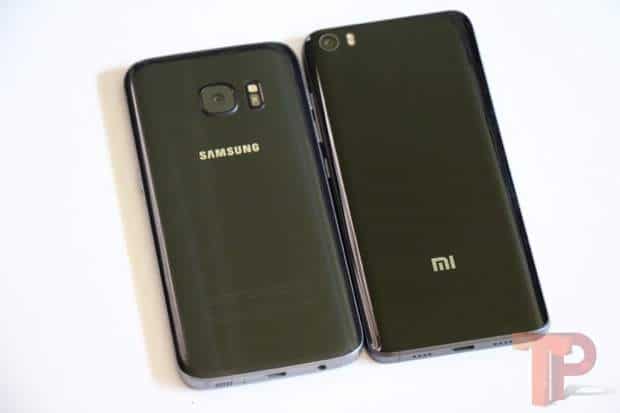 In design terms, however, it is gravity that delivers the biggest difference – the Mi5 is amazingly light at a mere 129 grammes as against the 152 grammes of the S7. For context, just consider that the iPhone 6S, which has a much smaller display (4.7 inches) than these two devices, tips the scales at 143 grammes. And notwithstanding all the talk of Gorilla Glass and metal frames, these are two devices that are definite more Delicate Darlings than Men of Steel – drop them at your peril, especially as they both tend to be slippery, courtesy those curved glass backs and curved edges.

And well, they both look very good indeed. If we had to pick one of the two, it would be a heck of a choice to make – the S7 does have a more “solid and smooth” feel to it but on the other hand, the sheer compactness and lightness of the Mi 5 will have its takers too. Yes, they look similar and neither design is radically new (the S7 picks up from the S6 and the Mi5 takes more than one leaf from the design manual of the Mi Note Pro) but we don’t think anyone is complaining – both phones look gorgeous and take their places among the best looking phones in tech town quite easily. In terms of color, we would like to paraphrase Henry Ford – any colour will do as long as it is black! 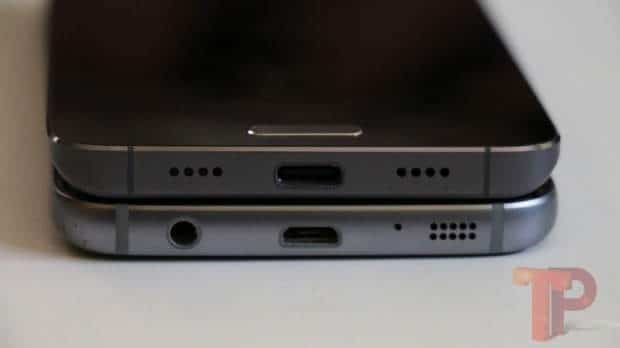 Beneath all that style, of course, there is a tonne of substance. Each phone packs in enough to claim to be among the most powerful smartphones in the market. The S7 has a quad HD Super AMOLED display with a pixel density of 577 ppi, 4 GB RAM, 32 GB storage (expandable), a 12.0-megapixel camera on the back, a 5.0-megpaixel camera in front, a 3000 mAh battery and is powered by an octa core Exynos processor (the Snapdragon 820 edition has alas not come to India). Against this, the Mi5 throws in a full HD display with a pixel density of 428 ppi, 3 GB RAM, 32 GB storage (non-expandable, alas), a 16.0-megapixel rear camera, a 4.0-megapixel ‘ultrapixel’ front facing camera, a 3000 mAh battery, and the jewel in its crown – a Qualcomm Snapdragon 820 processor (it is the first phone in the Indian market to come with that chipset). Both phones run Android Marshmallow but above that core are two very different interfaces – the Galaxy S7 comes with Samsung’s TouchWiz UI, while the Mi5 has Xiaomi’s own MIUI 7.

United by great and rather similar looking design and some terrific hardware, these two devices are however separated by a massive price gulf. For, while the Samsung Galaxy S7 is priced at Rs 48,900 (about USD 738), the Mi5 is available for Rs 24,999 (about USD 377). And it is a reflection of the perception of the two brands in the market that while many have considered the S7’s price to be a competitive one (the S6 was released at a slightly higher price last year), the price of the Mi5 is being seen as expensive compared to the likes of the Mi4 and Mi3. 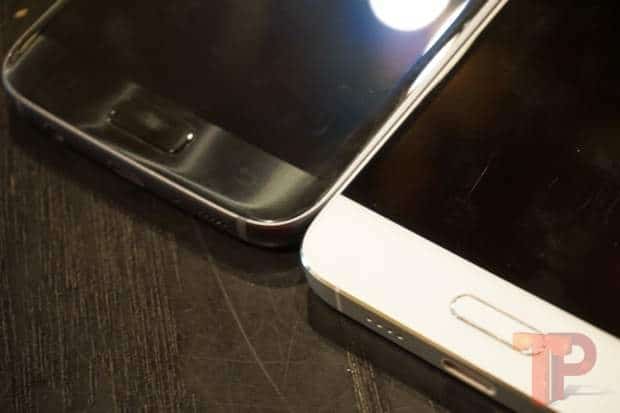 Which of the two delivers more bang for the bucks it charges will be revealed in our reviews in the coming days, but if you are looking for devices that look gorgeous and fit easily into the palm of your hand (warning: they come with a tendency to slip out) and come with cutting edge hardware, you would be well-advised to consider these two Android brothers from different mothers.

Was this article helpful?
YesNo
TechPP is supported by our audience. We may earn affiliate commissions from buying links on this site.
Read Next
[First Cut] Redmi Watch: A rather watch-ful debut
#First Impressions #hands on #Samsung Galaxy S7 #Xiaomi Mi5