Just as the Mi Max launch was about to get underway at Delhi today, there was a disturbance in the crowd (which was large-ish, as a number of ‘Mi fans’ had been invited to the launch as well). It seemed to be about seating initially, hardly surprising as there had been large crowds outside the venue as the event got underway and it had been a hot, sweltering afternoon even by Delhi standards. A few ‘fans’ were complaining loudly about having travelled for hours and not being able to get a seat. Understandable.

However, as matters took a turn for the worse, it seemed that seating was not the only point of dispute. There were demands for t-shirts, which after another fifteen minutes of shouting turned into demands for ‘gifts’. Xiaomi’s executives had to move from appealing for calm to assuring ‘fans’ that their gifts would indeed be given. Even after the event was over, the ‘fans’ were assured that they would be given their ‘gifts’. 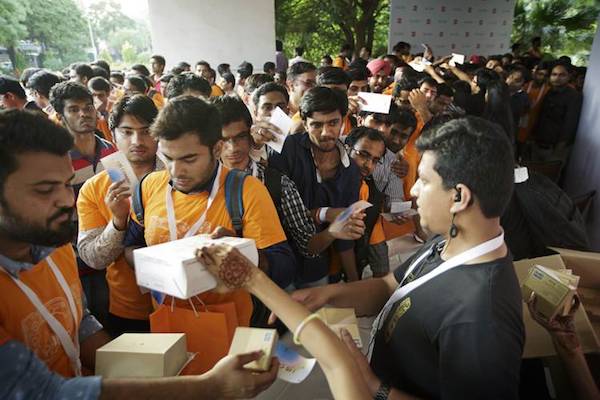 This is not the first time a fight has erupted over gifts at a tech event. And no, it’s not alwas the fans that spur them. A few years ago, PR executives were pushed around as mediapersons fought for what they thought were phones being handed out as gifts at a Micromax event. And even before that, I witnessed battles erupting at a Virgin telecom event when they were handing out cocktail glasses with cricketers icons on them – those who did not get them took away the ones given to others and smashed them on the ground.

Which brings me to the subject of this piece – the decidedly weird tradition of handing out ‘gifts’ at tech events. Contrary to popular belief, handing out gifts is not necessary at tech events. In fact some of the biggest companies we know do not hand out anything at their events beyond a press release and a USB drive containing relevant information and images about their products. And no, they do not seem to suffer in terms of media coverage.

In my early days in the tech media, we only used to get the press release print outs and perhaps a notepad and a pen in the press kit. And even that seemed to be a bit much – after all, most media persons used to attend press events for getting news and information, not gifts. In fact, in many media organisations, you were not allowed to even accept anything other than a press release. I remember one of my editors throwing a fountain pen that had come in a press kit into a garbage can, snapping “we are in the writing business. We don’t need pen and paper from anyone” at a cowering reporter who had accepted them.

That sadly seems to have changed. I cannot exactly remember when, but I think we started sensing things turning around somewhere around 2007-08, when suddenly hard drives, fancy pen drives, laptop bags and gift coupons began to appear on the horizon. Initially, they were used by the relatively newer brands who wanted to get some attention from the media and offered these gifts as a sort of carrot. The problem, however, was that it spurred even other brands to do the same. And before we knew what was happening, suddenly no press kit at a tech conference or briefing was complete without some sort of a gift offering, and while initially these gifts had a link with the brand hosting the event, they soon became random offerings. We once got Adidas gift vouchers at a smartphone launch, and designer handbags and wallets at a mobile operator’s event. What’s more, the gifts kept getting more expensive – there were designer wristwatches, fancy briefcases and in some cases, even handsets and smartwatches being handed out.

And that led to tech events earning the rather unfortunate reputation of places where one not just received information but also some freebies. This in turn led to increasing attendances at tech events and fights as those described earlier for “gifts” – many was the person whose sole purpose of attending an event was to pick up the freebie and leave. If that sounds difficult to believe, just check the pile of empty press kit bags that litter the corridors after most tech press conferences end. As if that were not enough, the phenomenon of “fans” has worsened matters. As we have stated before, we have nothing against genuine followers of a brand or a product, but as was shown at the Mi Max event today, a number of people attend these events in the guise of fans but actually wanting nothing more than a free gift to take home – be it a gizmo or even a T-shirt. The penchant of some CEOs to come on stage and play Santa Claus, announcing free gifts for fans has not helped matters. “There are no brand fans, only value fans,” a senior executive in one of India’s leading mobile phone brands told me a few days ago. And judging by today’s events, he was not far off the mark.

The irony is that we are not sure that giving gifts actually helps in getting media coverage or even positive attention on social networks. Some of the brands that hand out the most expensive gifts have been treated with ill-deserved contempt by those that received them. And yes, there are many brands that give absolutely nothing and still get excellent media coverage. All the gifts seem to have done is attract freeloaders and spur battles in the giftzone and yes, after today, battles in the fanzone too.

All of which makes us wonder if it is not time that tech brands stopped handing out freebies at events? We cannot see them adding much value to their equity in the short or long run. All a gift can assure is a crowd. And a crowd that has come to your event for a gift is notoriously fickle – it will easily go to another brand that offers another gift on another day. Would there have been a fracas at the Mi event today if the event itself had been just about a launch?

Nothing summed up the expectations people have of tech events better than what happened after the Mi Max event. I was standing on the roadside with a colleague, waiting for our taxi, when a gentleman came up to us, and looking at out Mi-labelled press kits, asked:

We are reasonably sure he was not referring to the press release or the USB drive with images and information.

The more’s the pity.

Was this article helpful?
YesNo
TechPP is supported by our audience. We may earn affiliate commissions from buying links on this site.
Read Next
NothingOS Made Me Realise How Much Overrated Pixel UI Is
#Eventually Speaking #Opinion