Best or Brightest – Just What is a “Flagship” Device?

As with so many things these days, it started with a few tweets. With all the phones being released these days, the question went up if “in this day and age” a company could call a device with a MediaTek P10 processor a flagship device – Gionee had used the term to describe its M6 and M6 Plus devices? Within some time, the definition of flagship was widened to accommodate a quad HD display (“full HD is so 2014”), a minimum of 4 or 6 GB of RAM (depending on who you talked to), and a few dozen tweets later, it also included a metal build, a camera with a minimum 12.0-megapixel count (some insisted on 16 though), a 3000 mAh battery (disputed again – many insisted that 4000 mAh was the bare minimum in this day and age), minimum of 32 GB storage and a few other things besides. It was as if the definition of “flagship” was changing with every tweet. This was not the first time something like this had happened – a few weeks ago when YU launched the Yunicorn, many wondered if the company could call it a flagship, when it was powered (again) by what many considered the relatively modest Helio P10 processor. It is almost as if there is a preset format for a flagship device out there to which companies have to adhere – it has – HAS – to have the best processor, lots of RAM, storage, great camera and so on and so forth. 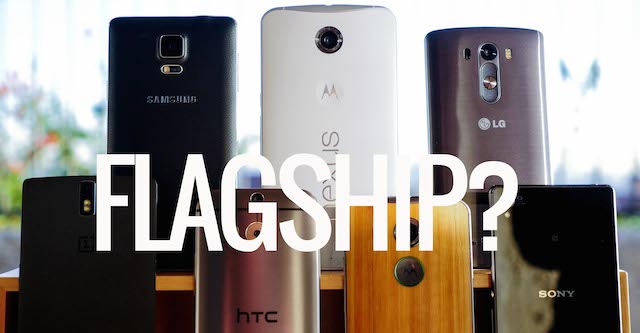 Or does it?
After all, who determines which device is a flagship?
Is it simply the best device a brand has or something else – and why on earth would it be something else (surely your best should be your flagship – that’s logical!)?

The dictionary seemed a good place to start, so we headed to Dictionary.com and were rewarded with the following definition:

1. A ship carrying the flag officer or the commander of a fleet,
squadron,or the like, and displaying the officer’s flag.
2. the main vessel of a shipping company.
3. any of the best or largest ships or airplanes operated by a passengerline.
4. the best or most important one of a group or system:
This store is the flagship of our retail chain.

5.being or constituting a flagship.”

The first three definitions clearly referred to specific sectors, but it was the last two that fit the context of our discussion best. A flagship device in the world of technology was “the best or most important one of a group or system.” Now came the next part: what and who determined what was “best or most important“?

The problem is that logic often does not work when it comes to marketing. And that is because marketing deals with creatures that are moved more often by sentiment than by logic – homo sapiens, human beings…in a word, us. And it is this that often makes the “best” and “most important” devices two different ones, instead of being the same.

Which is why companies so often seem to showcase devices that seem relatively modest in comparison to other devices in their own portfolio as ‘flagships’. They might not be the best in hardware/software terms but are considered by the company to be more worthy of attention, or in other terms, more important. This might be because of design, price or any other factor, but the “best device = flagship” equation is a tenuous one at best.

Perhaps no device illustrates this better than the iconic Moto Razr. It was not the most powerful phone in Motorola’s portfolio but for close to two years, was projected as its flagship. “It is a simple case of what looks best…what appears to capture the imagination of your customers the most. It is actually a pretty cold blooded marketing decision,” a former Motorola executive recently told me. Another case in point was the Nokia N95, which was seen as the flagship device of the range even though in sheer hardware terms, many felt that it was overshadowed by the E90 or Communicator.

A friend of mine in the defence forces added an interesting spin on the perception of “flagship” in military terms too. “It does not have to be your most powerful ship,” he said with a wry grin. “It has to be the ship you want your enemy to notice the most. It’s purpose is simple – to attract the most attention. Even in military history, flagships were rarely the most powerfully equipped ships. They were in fact, the lightest and the fastest, because more often than not kings and generals travelled on them, and in case things did not go well, the ship had to be designed for a quick retreat. This changed during the Second World War when your most powerful vessel – the aircraft carriers – became your most important one, but the term ‘flagship’ was not used for them as often as most commanders now preferred to travel in smaller ships.”

If that still sounds difficult to digest, let us consider the case of the company that many consider to be the master of branding – Apple. Although the company has never really pushed any single product as a ‘flagship,’ a careful look at its recent history will show that it has not always showcased its most powerful device as its most important one.The Mac Pro is the company’s most powerful computer, but it still showcases the iMac in most of its communication. Similarly, although the iPhone 6s Plus is its most powerful phone, the 6s is the one that gets pushed more aggressively. Want a more direct example? Even though the much more versatile and powerful iPod Nano and iPod touch existed, for quite a while, the iPod classic was considered the iPod standard-bearer.

“Your flagship product does NOT have to be your best specced product,” according to an executive in a company known for its smartphones. “It has to be the one that you think it is most worth highlighting. In
many cases, the most powerful or best specced products that we make are a classic case of just trying to show the world that ‘look, we can do this too,’ rather than generating flagship-level sales.”

He cited two cases to support his theory – the Moto X Force and the Asus ZenFone Zoom. Both devices were in sheer hardware terms the most powerful products in their company’s portfolio, but neither was really pushed as a flagship. “A flagship is supposed to drive sales. Your most powerful product might not do that – it might instead just show your potential in terms of performance. A flagship has to do much more,” he concluded.

So what is a flagship device?

A simple answer is: ask the company.

After all, it is the one that decides to devote its marketing energies around it. Of course, whether the consumers accept it as such is another matter. “There is no template that if you want to have a flagship device, it should have this hardware and that software. A phone with a 2 megapixel camera can be a flagship for a relatively small phone company, as that is what it thinks is its best phone to highlight. It is like its child – who are we to tell it what its flagship is? It is like telling a parent that the name of their child is wrong!” an executive in an electronics retail chain in Connaught Place informed us with a laugh.

The word “flagship” actually does not have much to do with technology.
It is in fact more a matter of terminology.
More about marketing, less about machinery.
More about perception, less about power.
As in so many things these days.

As in so many things these days.

The budget flagship is dead, long live the new budget…
Realme GT 2 Pro Review: Flagship Killer to a Flagship
The Jabra Elite 65T just became the best TWS below Rs 5,000!
Best ANC below Rs 10k? JBL takes 67 percent off its ANC…
Dude, which OnePlus 7T should I go for? (Or should I just…
Tech advertising in times of Covid-19: Not just about…