In 2015, Xiaomi launched its first tablet in India. At Rs 12,999, it seemed almost too good to be true – it had a very good display, a good processor, great battery life, and decent design, and was way ahead of the competition. “Close your eyes and buy it,” was our advice about the Mi Pad.

Not too much seems to have changed in the seven years since then.

A few hours ago, Xiaomi released its latest tablet in India. At Rs 12,999 (introductory price), it seems almost too good to be true – it has a very good display, a good processor, great battery life, and amazing design, and it is way ahead of the competition. Our advice about the latest Xiaomi tablet, the Redmi Pad, is the same as it was about the first.

Close your eyes and buy it.

Redmi Pad Review: Going up against the “curse of compromise” of the budget tablet segment

We know that the headline and the opening lines are a dead giveaway, but they sort of sum up the Redmi Pad. It has been a while since we called a product a complete and utter no-brainer in terms of value for money because such products are rare. With great prices come some compromises. The corners are cut somewhere. There inevitably is some catch. Some features go missing, and some hardware is perhaps not quite up to scratch. We have been using the Redmi Pad for almost a week now, and if there’s a catch, we have not spotted it. Yes, we can always nitpick about this and that, but broadly speaking, this is as close to tab price perfection as we have seen for a while. 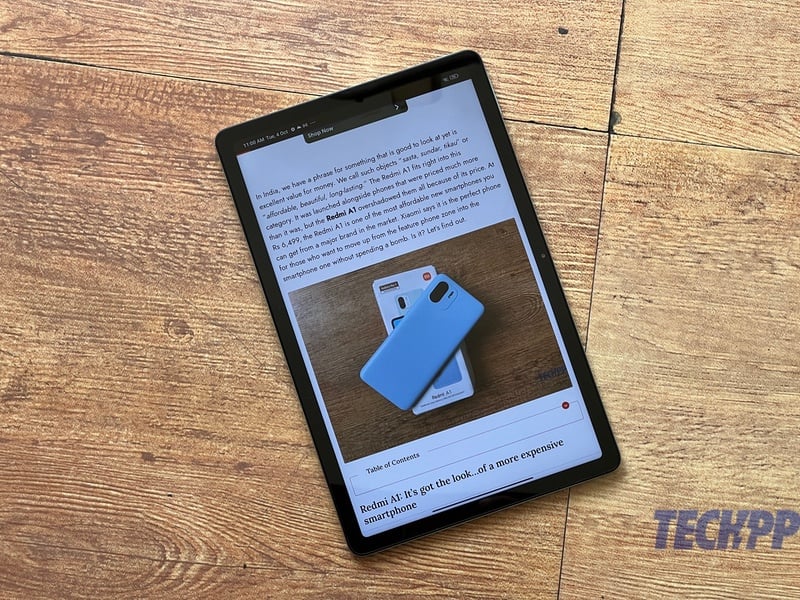 Indeed, at its introductory starting price of Rs 12,999 or even at Rs 16,999 (the price of its top variant), the Redmi Pad, Xiaomi’s second tablet of 2022 (after the Xiaomi Pad 5), is right now perhaps the best value for money product in the tech market. That includes phones, notebooks, watches, wearables, and what you will. We have no idea what Xiaomi tweaked to get that price on the box, but we are just glad that they did. The budget tablet market badly needed a good performer, a low-priced Android equivalent to the base iPad, so to speak. While there is no shortage of tablets from well-known brands (Nokia, Motorola, Realme, Lenovo) in the sub-Rs 20,000 tablet segment, with great prices inevitably come great performance compromises. More often than not, these are in terms of processors (budget tabs generally get older, slower chips) and battery. Some of the budget tablets also tend to look a lot like, well, budget tablets. 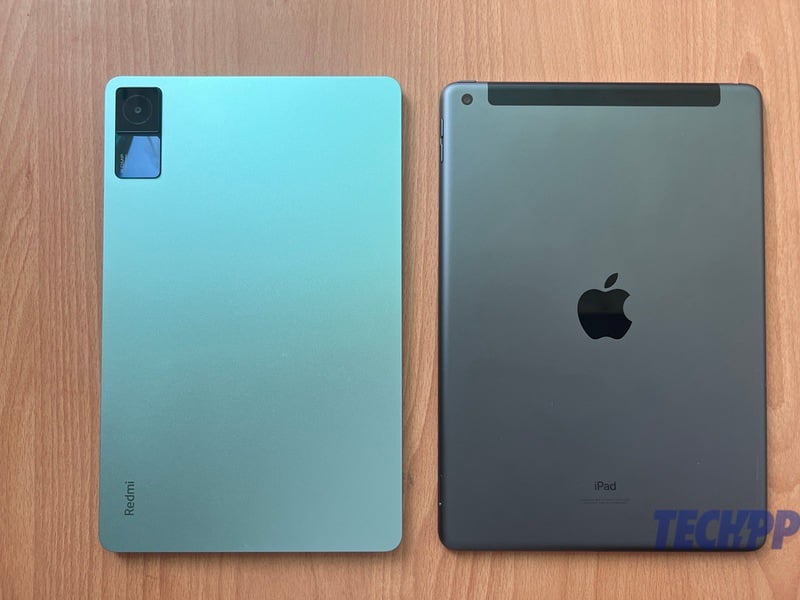 The Redmi Pad is nothing like any budget tablet out there. And that hits you from the moment you hold it in your hands. The build is actually very premium, with its blend of metal and glass. We got the Mint Green color, and it cut a very refined and elegant figure with its straight sides and narrow-bezel display.

It is very slim at 7.1 mm and at 465 grams, light for its size, and easy to carry – it will slip into most bags without a problem. Yes, that smooth back picks up smudges, but this is still a very good-looking tablet. We think the Mint Green actually looks more striking than the Xiaomi Pad 5, which is much higher priced. It is taller than an iPad but less wide.

Redmi Pad: Not specced like a budget tab either 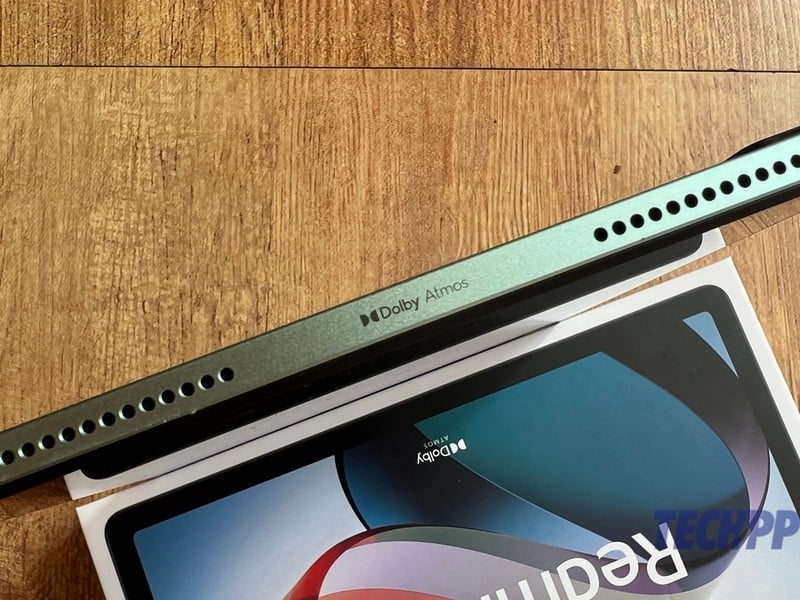 Accompanying that elegant design is a very good spec sheet that punches well above the device’s price tag. The 10.6-inch 10-bit LCD display is impressively bright and colorful, has a 2K resolution, and has a 90 Hz refresh rate. In combination with a quad-speaker setup (two on top of the tablet, two at the base) and support for Dolby Atmos, it makes the Redmi Pad a terrific device for watching videos and shows. The display handles images and video well, and the speakers are loud enough to fill a small room with good quality sound, with no distortion at maxed-out volumes. There is no 3.5 mm audio jack, though, which is a bit of a downer at this price, where a lot of folks still use wired headphones.

The MediaTek Helio G99 chip makes the Redmi Pad a decent gaming option too. This is a relatively new processor and much better than anything the competition can offer, tackling the biggest pain point of budget tablets – performance. The Helio G99 is not only better than the much-acclaimed Helio G96 that we saw on the Redmi Note 11 Pro earlier this year but also seems well ahead of the Dimensity 700 chips that drive many mid-segment phones. In fact, it seems very close to the highly-praised Qualcomm Snapdragon 695 (seen on the Redmi Note 11 Pro Plus, which starts at close to Rs 20,000). The tablet comes with three RAM and storage variants – 3 GB / 64 GB, 4 GB/ 128 GB and 6 GB/ 128 GB. Storage is expandable up to 1 TB, thanks to a microSD memory card slot. 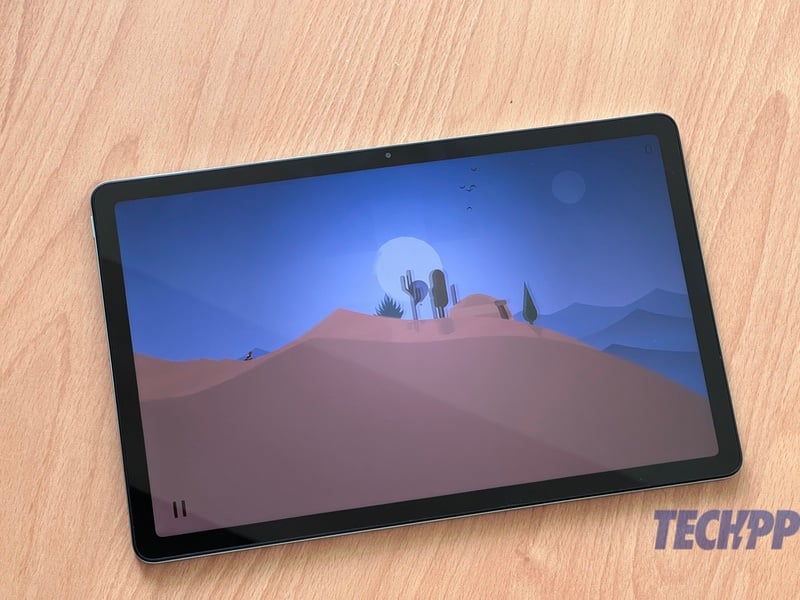 The tablet is able to run most games with a slight tweak to its settings, and many even with settings maxed out. Call of Duty needed a slight lowering of its settings, but Grimvalor played wonderfully well, and Knights of the Old Republic was a delight on the large screen. Our favorite gaming experience, however, was Alto’s Odyssey, in which the combination of the speakers and the display took to almost zen levels. Gaming on the device is definitely better than on any tablet below Rs 20,000, and actually, many smartphones are below that price point as well.

Redmi Pad: A productivity side too 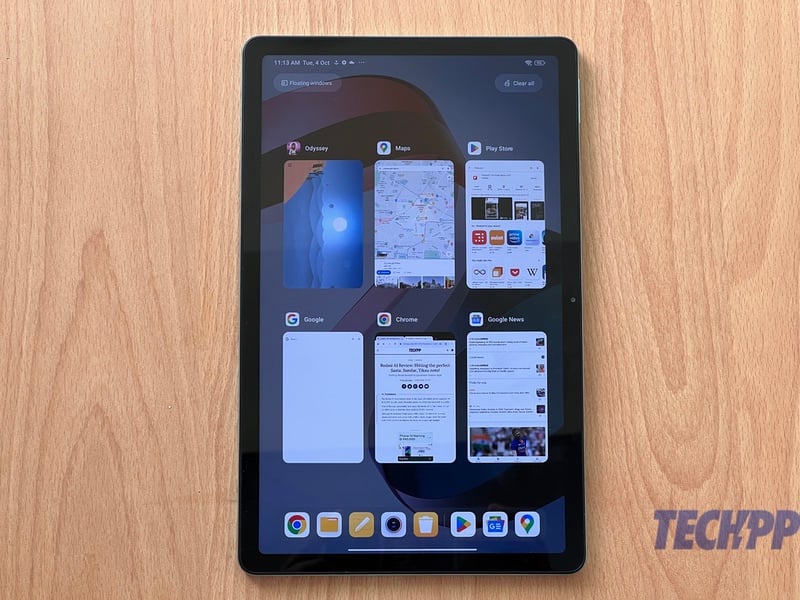 Multitasking on the Redmi Pad works very well too. The Redmi Pad runs on MIUI 13 on top of Android 12, which actually puts it a step ahead of the Xiaomi Pad 5, which is getting Android 12 now via an update. As we wrote in our review of the Xiaomi Pad 5, we liked Xiaomi’s tweaking of its interface for tablets, and it works just fine on the Redmi Pad as well. Some will complain of it being too similar to the iPad OS – we don’t think it is anything to complain about.

You can run multiple apps, switch between them, and if you go to the two higher RAM variants (4 GB/ 128 GB and 6 GB/ 128 GB, the base 3GB cannot cut it), even run apps next to each other in split screen mode and have floating windows for keeping an eye on an app while working on others. We would not recommend overdoing it beyond a point (this is not a Xiaomi Pad 5), but it generally works very well indeed. There is no active pen support or keyboard cover for the Redmi Pad, but it supports all capacitive styluses and will play nice with any Bluetooth keyboard for those who want to get into productive mode on it. 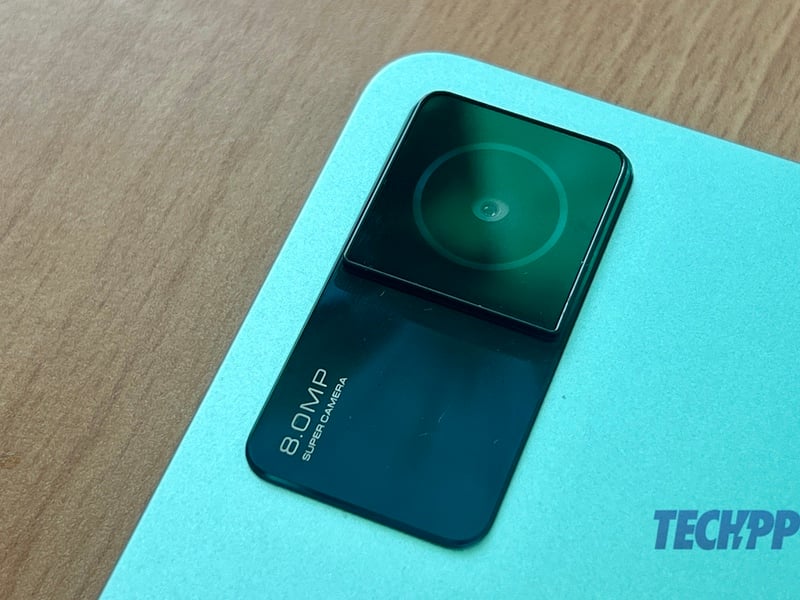 Speaking of productivity, the Redmi Pad has no fingerprint scanner, although it has a rather swift Face ID. You will need a password for financial transactions, though. The tablet also has a reasonably good 8.0-megapixel camera on its back and a very good 8.0-megapixel selfie/video calling camera in front, which Xiaomi has placed on the longer side rather than on top of the tablet, enabling it to be better at video calling in landscape mode. The front-facing camera is also going to get a feature called Focus Frame in the coming days, which will adjust the frame as per your movements and even make the view wider if need be. Welcome shades of the iPad. 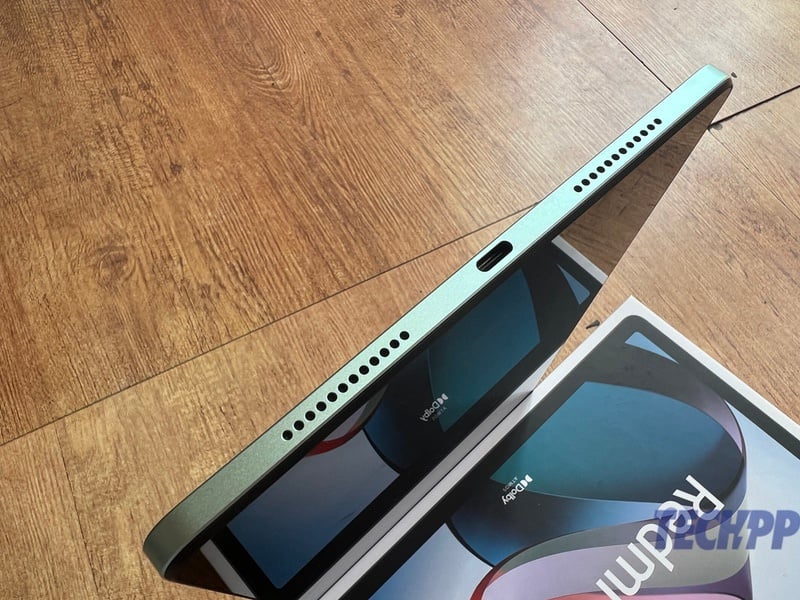 Shades of the Apple tablet can be seen in the battery life of the Redmi Pad. The 8,000 mAh battery in the device can easily get through a day of usage, involving lots of surfing, some gaming, word processing, and a lot of video watching (it is prime for that). We got about ten to a dozen hours of watching videos or gaming, which is right in the iPad zone. The tablet supports 18W of charging, and you get a 22.5W charger in the box. Charging does take close to three hours, but that is par for the course at this price point.

As we mentioned earlier, the Redmi Pad runs on MIUI 13 on Android 12. We have been told the tablet will get two more Android updates, three years of Android security updates, and three years of MIUI updates. In terms of connectivity, you get Bluetooth and Wi-Fi, but there’s no SIM connectivity (understandable at this price). 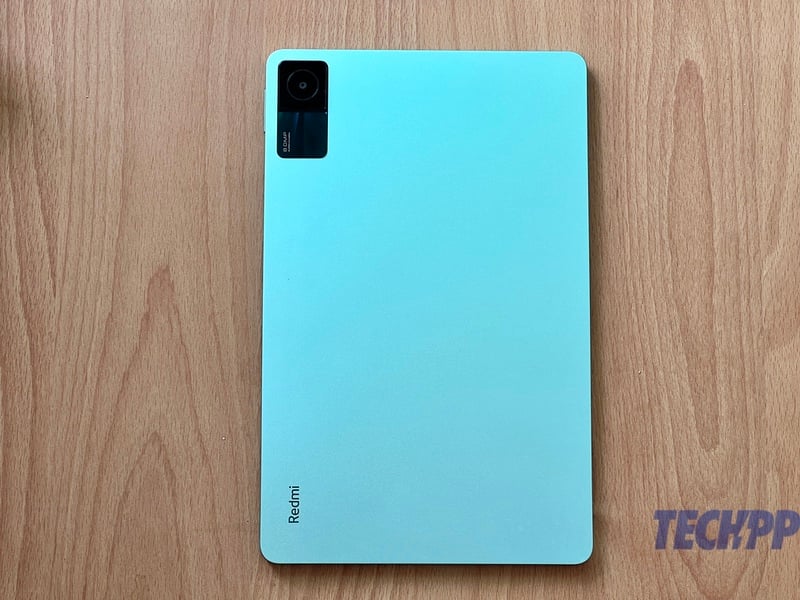 Its (introductory) starting price of Rs 12,999 for the base 3 GB/ 64 GB model is stunning even though it does compromise on some multitasking experiences, but even at Rs 14,999 for the 4 GB/ 128 GB and Rs 16,999 for the 6 GB/ 128 GB variants, the Redmi Pad is amazing value for money. And it does not really have any competitors at all in terms of what it brings to the tab table. In fact, its performance is so good that we would have no hesitation in recommending it as the best tablet you can get for not just under Rs 15,000, but even Rs 20,000.

This is pretty much the budget tablet everyone has been waiting for since the tablet market revived after the pandemic. Those who find an iPad way too expensive finally have a tablet that looks good, works well, and comes with a price tag that is right out of 2015!

Our advice is right out of 2015 as well: close your eyes and buy it.

Review Overview
Was this article helpful?
YesNo
TechPP is supported by our audience. We may earn affiliate commissions from buying links on this site.
Read Next
Skullcandy Mod Review: Betting on doing the basics well
#android tablet #Redmi #Redmi Pad #review