Virtual Reality has been gaining a lot of momentum lately and as a result, manufacturers are readying their own VR headsets. The latest one being Alcatel who announced the Wireless VISION VR headset at the ongoing IFA 2016. Alcatel is not just stopping at the headset and has also partnered with Starbreeze, a Stockholm-based gaming studio, and IMAX. Now the high-end VR headset race is something only a handful of manufacturers are interested in and Alcatel is now one of them. 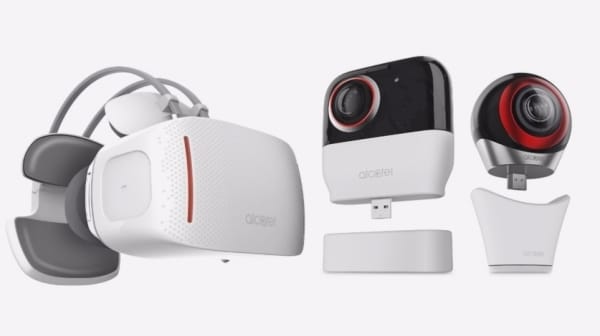 The VISION headset showcased at the event is a completely wireless VR headset which means no more tangling wires to deal with. Also, the VR headset is a high-end standalone one and not the basic ones. Now along with the VR headset is bundled the responsibility of creating an equally good ecosystem. It is here that Alcatel has shaken hands with Magic Interactive, Fraunhofer and Jaunt VR for creating immersive content.

The innards of the vision headset include two 3.8-inch displays working in tandem to create a 120-degree immersive environment. The headset comes with a 3GB of RAM and 32GB of onboard storage. Alcatel has not revealed the battery details but claims that the VISION will sustain 3-hours of gameplay before the battery actually gives up. On a related note, Alcatel has also partnered with a slew of 360-degree camera brand including 360fly, ALLie Camera, Arashi Vision and Primesom. It is pretty much evident that Alcatel wants to catalyse their VR efforts and hopefully compete with the other bigwigs including HTC Vive and Oculus Rift. But the success of Alcatel’s VR endeavour hugely depends on how well they will craft the content for the same since it all boils down to the ecosystem.

Alcatel is yet to announce the pricing of the VISION and it is safe to assume that it will retail above the $500 mark.