In a bid to push its services in emerging markets, Facebook has today introduced Messenger Lite for users with slow connections and underpowered smartphones. As it sounds like, Messenger Lite is an extension of the Facebook Lite app which was launched months ago to achieve a similar purpose. However, it is a bit intriguing that the social giant is forcing people with basic smartphones to use two apps instead of just one. 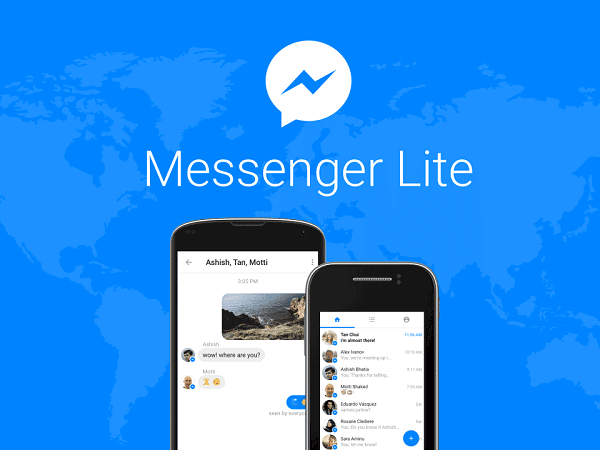 Messenger Lite retains essential features of the primary app including sending text messages, photos, stickers, and links. Furthermore, the app sizes merely under 10 MB instead of a hefty 43 MB. The interface has been kept identical, however, the icon’s colors are inverted (the bolt is now blue with a white chat bubble background). Messenger Lite also drops advanced features such as bot integration, video chatting, and chat heads in favor of better performance.

Facebook Messenger currently serves more than a Billion people around the world every month and with a lighter medium, the user base is likely to see a spike as it rolls out for everyone. Even the current app suffers from crucial shortcomings such as battery hogging, too many background processes and is in a dying need of optimization itself. Messenger Lite will be initially available for countries including Kenya, Tunisia, Malaysia, Sri Lanka and Venezuela.

With Messenger Lite and Facebook Lite applications, Facebook will be bringing the users to its platform who were unable to access before due to limited internet services. They’ve been attempting to fabricate various ways to further cure the issue, in a recent interview with Business Insider, Facebook product chief Chris Cox mentioned that the company conducts something called “2G Tuesdays” where all the employees have to opt into one hour of a simulated slow connection once a week for understanding the problems. They recently unveiled Aquila, a high-flying, long-endurance plane that will bring basic internet access to the developing world.

On its blog, Tom Mulcahy, Engineering Manager for Messenger Lite writes, “More than 1 billion people around the world use Messenger every month from a range of mobile devices on networks of various speeds and reliability. With Messenger Lite, more people can stay in contact, regardless of network conditions or storage limitations on their Android devices. Messenger Lite was built to give people a great Messenger experience, no matter what technology they use or have access to.”

Messenger Lite is currently limited a bunch of countries, however, if you are desperate to try it out, you can download and sideload the APK from the below link.

PS: The APK comes in several variants depending on the screen size of your Android phone. So look for the right option before downloading.