The NPCI (National Payments Corporation of India) has officially launched UPI LITE at Global Fintech Fest 2022, which took place in Mumbai today. UPI LITE is a feature that allows users to initiate small-value transactions by creating a local wallet on the user’s device. The NPCI announced a lighter version of  UPI a few weeks back for daily transactions, and the rollout has finally begun. Here’s how you can enable UPI LITE on your smartphone.

As of today, UPI LITE is exclusive to the BHIM App, which is available for free on both the Google Play Store and the Apple App Store. NPCI says that UPI LITE will soon be available across other popular UPI Apps like PhonePe, Google Pay, PayTM, etc.

What is UPI LITE?

UPI LITE is a feature that creates a local wallet on your smartphone, where you can add funds from your primary savings account. This wallet can be used for any UPI transaction with a value of less than Rs. 200. The process of paying the merchant via a QR Code or to the receiver using a UPI ID or phone number remains the same. When the amount entered by the user to transfer is less than Rs. 200, the UPI App will automatically prompt the user to send the amount using the UPI LITE method, i.e., local wallet. This wallet can be funded using your primary savings account at no extra cost. Note that the maximum balance you can have in the UPI LITE wallet is Rs. 2000.

UPI LITE transactions do not require you to enter your UPI PIN. However, it does not mean that UPI LITE is less secure than normal UPI since the BHIM App requires you to enter the Passcode before accessing any part of the app. UPI LITE transactions do not require any PIN as this feature itself is made for the convenience of low-value transactions. Just like contactless payments on debit and credit cards, where the extra step to enter the PIN is skipped in favor of a faster transaction, but only up to a limited amount.

UPI LITE is completely free to use, just like normal UPI. It is supported across all major banks. Although some banks might not recognize this new feature instantly as it was just announced today, the support shall be expanded to all the banks that offer UPI.

The main motive behind UPI LITE is to prevent the cluttering of low-value transaction entries in the passbook, which a person does regularly—for example – buying milk, small groceries, or paying for a quick snack. Many users were annoyed that their bank statement gets filled with such small value transactions, resulting in a 20-30 page statement while applying for loans, VISA, etc. UPI LITE will finally address this issue, and users will be able to enjoy their daily payments to vendors without worrying about daily entries of such transactions in their passbooks.

How to Enable UPI LITE?

Now that we know how UPI LITE works, here’s how you can enable it on your smartphone. As of now, UPI LITE is only available on the BHIM App, which is available for Android and iOS devices. As per NPCI, support for UPI LITE will soon be expanded to other UPI Apps as well.

1. Download the latest version of the BHIM App from the Google Play Store or the Apple App Store.

2. Login and set up the BHIM app with your UPI-enabled savings bank account.

3. On the home screen of the BHIM App, scroll through the top menu band till you find the UPI LITE option. Tap on Enable Now.

4. The app will now show you information and details of UPI LITE, tap on Next, and then Agree to the Terms to the Conditions.

5. Tap on the Enable Now button. You will be prompted to choose the Bank Account which will be used to fund your UPI LITE wallet.

7. Your UPI LITE setup is now complete. Now for any transaction below Rs. 200, BHIM App will prompt and suggest you pay using UPI LITE. However, you do have the choice to change the payment method and pay using any other normal savings bank account using normal UPI. 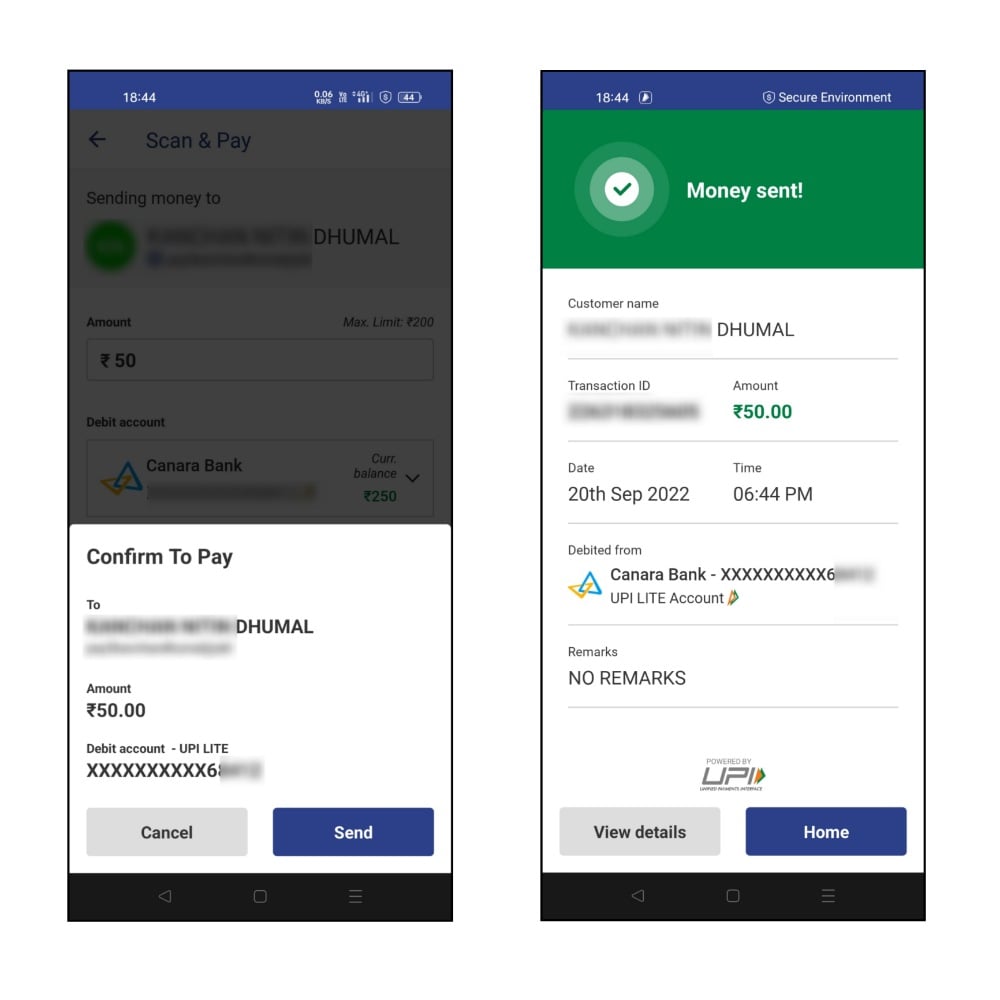 Things to Know about UPI LITE

You can also read all the Terms and Conditions about UPI LITE in detail on BHIM UPI’s official website.

NPCI had said that UPI LITE is designed in a way that it can even be operated offline. However, at the time of writing this article, we have not been able to process UPI LITE transactions offline. As of now, UPI LITE transactions still require your phone to be connected to the internet. This might be due to the fact that UPI LITE is still very new and is under a phased rollout as we speak. We will keep this article updated with newer notifications regarding UPI LITE.

Is there a separate UPI Lite app?

This is a common question we have come across since publishing this guide. No, there is no dedicated UPI Lite app. UPI Lite is just a feature inside the BHIM UPI app for now and soon should make its way to other UPI-based apps. So don’t fall for any trap promising to help you download UPI Lite app as there is nothing like that.

Was this article helpful?
YesNo
TechPP is supported by our audience. We may earn affiliate commissions from buying links on this site.
Read Next
How to Split Screen on Chromebook [3 Easy Ways]
#how to guide #india #UPI