Facebook has been improvising its live broadcast at regular intervals and this time around the social media giant has introduced the scheduling feature for the broadcasters. Now what happens here is that broadcasters can schedule a Facebook Live stream beforehand instead of sending an invite without the link to the live stream. As with most of the other Broadcast feature, the Scheduling is also rolled out for verified pages. Facebook is planning to roll out Live scheduling to all the pages starting next week. 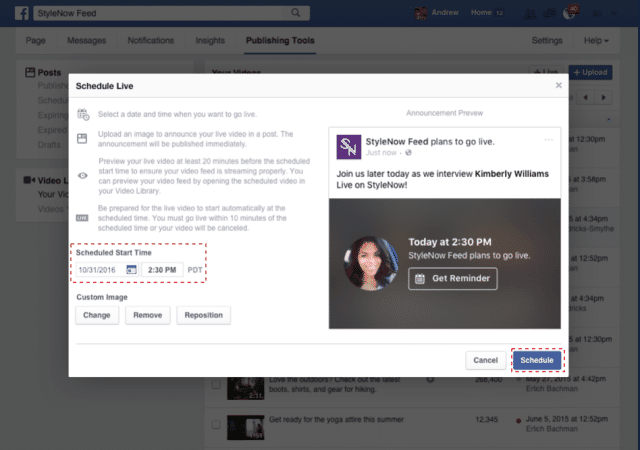 I have always found it to be a tad bit annoying that one had to manually keep a track of the live stream and would get a notification only once it starts. The another problem was the absence of a shareable link, so all one could do is send an invite with the timings on it. This new feature will definitely help the bigger players including brands and celebrities who usually follow a schedule when it comes to Live broadcasts.

In order to schedule the Facebook Live broadcasters, need to head over Publishing Tools>Video Library>Live and then copy their credentials into a Stream key. The best part is that broadcaster can add an announcement and publish it to their News Feed. Additionally, the publisher can also promote their videos so that it gets across to the required audience and can also embed the same on their blogs.

The live streaming services suffer from a major drawback, the broadcaster will only begin once they are satisfied with the number of people who have joined the broadcast, there have been instances where the broadcaster has literally asked viewers to wait so that “more people start watching.” Also, the new feature lets the viewers park themselves for the video three minutes prior to the broadcast.

Facebook and Periscope are battling it out with new features. While Periscope has a better Producer feature that can churn out well-finished content the Facebook boasts of the advantage it has over the reach for the brands.

TechPP is supported by our audience. We may earn affiliate commissions from buying links on this site.
Read Next
How to See Liked Posts On Facebook [2022]
#facebook #Facebook Live #Periscope