Xiaomi’s Mix phone has been near perfect mixture of elegant styling bundled with innovative features. The phone initially started as a concept and now the Mi Mix has been showcased at the Xiaomi’s latest lauch event in China. That said, the Mi Mix heralds with certain mention worthy features that we are yet to see in other smartphones and it is these features that make the Mi Mix a futuristic phone worthy or our attention, 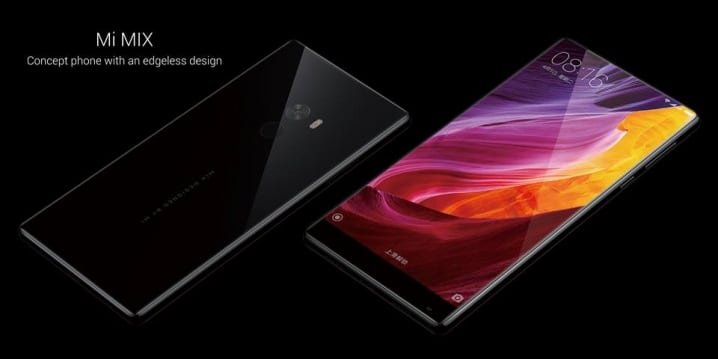 The Xiaomi Mix looks apart, thanks to its edge to edge display and the staggering 91.3-percent Screen-to-body ratio, something that almost eliminates the side bezels. Yet another interesting aspect of the design is the absence of earpiece and the relocation of front camera to the left bottom camera. This helps in maintaining the continuity of the display imparting it a fluidic look.

The entire phone is crafted out of ceramic and this includes the ceramic back and the ceramic frame. By using Ceramic, the need for glues, adhesives and plastic are ruled out thus eventually making the device unibody in nature and achieving a greater fit and finish. For the sake of elegance, the Mix would sport 18k gold rims around the camera and the fingerprint sensor. The fingerprint sensor has also been fitted at the back to make the place for the gigantic 6.4-inch edge to edge display on the front. All the ceramic and the seamless construction of the Mi Mix results in an overall hardness of 8 MoHs. 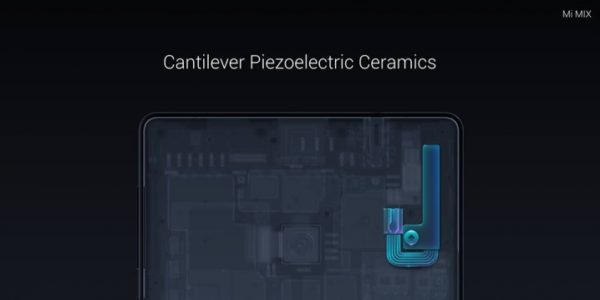 While it might sound like a lot of technical jargons thrown around randomly it is easier than it sounds. As one might have observed on the front end the Mi Mix is devoid of an earpiece and a proximity sensor, two quintessential hardware feature of almost any phone. What Xiaomi has done is that it has improved on both the features and has taken a futuristic approach.

The Cantilever Piezoelectric Ceramic Acoustic will allow users to hear the voice without a traditional earpiece and the Ultrasonic Proximity sensor hidden behind the display replaces the usual IR sensor which would have otherwise gobbled up the precious space. 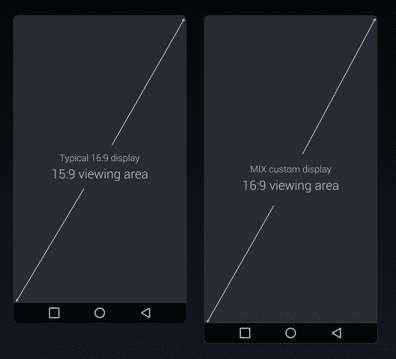 Well, we are used to the 16:9 display (or the 15:9) but with the thinner bezels and the edge to edge display Xiaomi has managed a 17:9 display. The display is arguably better than the 16:9 configuration as it would increase the screen space and will eventually aid in viewing the content in a much better way. Another trickery comes in the form of a rotating camera, the camera app in the Mix 2 rotates along with the phone so no matter what angle you are holding your phone at the pictures wont be upside down.

On the storage front, the Xiaomi Mi Mix offers 128GB of UFS 2.0 Storage. The UFS storage achieves up to 3 times faster speed than its eMMC counterparts all the while saving on the power consumption. Needless to say, the inclusion of UFS also directly translates into better read and write speeds. Xiaomi Mi Mix also supports Quick Charge 3.0 and is backed by a 4400mAh battery. The 18K variant, however, comes with a more powerful 8GB RAM and 256GB of storage.

The audio features in the Xiaomi Mi Mix include an HD audio module sporting 192KHz/24bit. Also, Xiaomi claims that the GPS unit on the Mi Mix is a high precision positioning system. Xiaomi has prepped the Mix with the latest Snapdragon 821 processor clocked at 2.35GHz. The NFC functions include read, write, card emulation, Mi-Pay ready.

Xiaomi Mi Mix will also come in a premium packaging alongside a leather casing. The casing can also be bought separately at RMB 299. Well, all this exclusivity and elegance comes at a price but since the phone is from Xiaomi stables we did expect it to come with a justified price tag. At RMB 3499 for the 4GB RAM/128GB Storage ($516) and RMB 3,999 ($590) for the 6GB RAM/ 256GB Internal Storage the Mi Mix has been well priced.

TechPP is supported by our audience. We may earn affiliate commissions from buying links on this site.
Read Next
With Redmi A1, is Xiaomi Resurrecting the Android One Dream, but Without Google?
#xiaomi #Xiaomi Mi Mix