Messaging apps have come a long way. The past year for technology largely revolved around these services as artificial intelligence and chatbots continue to evolve. Google seems to be one of the companies who has been investing fiercely in the sector. But the search engine giant has been unable to keep up its own pace and the industry’s trends. That’s mainly the reason behind the hodgepodge that is Google’s messaging environment today.

Seven! That is the number of chatting apps Google has right now which is quite insane and none of them actually integrate with each other. The list includes Google Allo, Google Duo, Google Spaces, Messenger, Google Voice, Youtube, and Hangouts. Phew. Google Voice, in fact, was reinvigorated just recently with a long overdue makeover for some particular reason only they can perceive. So, as you might have guessed already, it is getting exceedingly difficult to keep up. Hence, in this article, we (try to) break down the seven platforms and discuss what they do and why they exist. 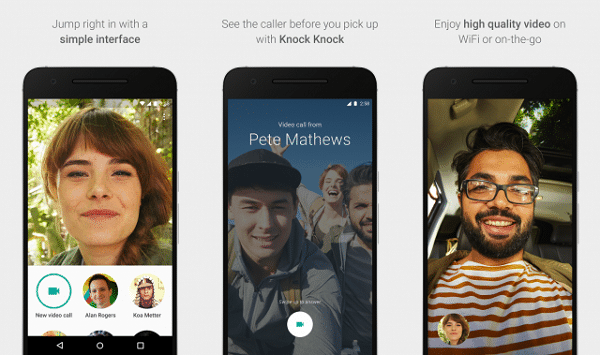 Probably the most straightforward app we’ll talk about here is Google’s one-on-one video chatting client, Duo. It was launched last year in Summer and is essentially a video calling mobile-only app. The app managed to lure in over 10 Million downloads primarily due to its minimalist interface and the ability to run on relatively poor networks. But it doesn’t sync with any other Google service. So, you can’t use it on a computer and due to its standalone nature, you have to maintain and update a separate app. It also doesn’t support group conference calls, so another app for that. Maybe Hangouts? 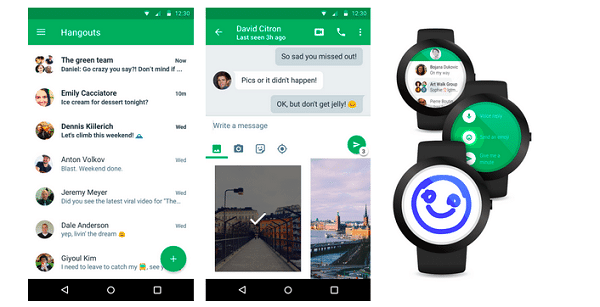 Okay, so if Duo is a video calling app, why does Hangouts exists?

Hangouts does mostly everything. It supports text messaging with all the doodling, sticker features, voice calling, video calling with group support, desktop sync, SMS integration, and also, VoIP depending on where you reside. So, it’s the supreme app? Umm, no.

The biggest impediment Hangouts suffers from is the lack of attention from Google which is quite difficult to grasp as it’s the platform the company should be focused on the most. Additionally, there’s no search functionality which still hurts me everytime I talk about it. Therefore, long conversions are not recommended on it. Also, the apps are poorly developed and can be slow to receive and send messages. It also misses out on some modern additions such as bots and Google Assistant integration in chats.

Update (10.03.2017): Google is steering away Hangouts towards enterprises and has overhauled it completely to take on platforms like Slack. The first thing you should know is that there are two variants of Hangouts: Hangouts Meet and Hangouts Chat. 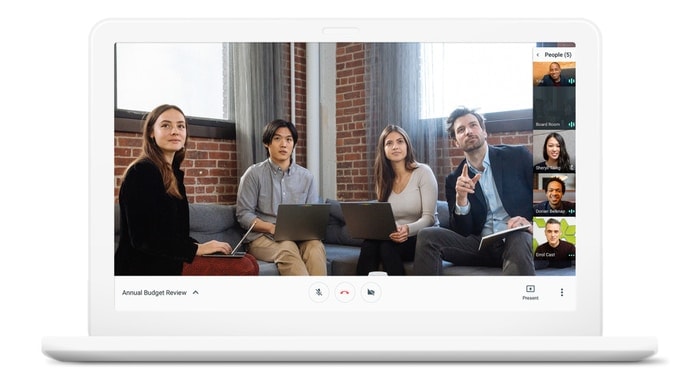 Hangouts Meet is meant to be a straightforward and lightweight video-conferencing app. You are supposed to generate dial-in codes for meetings and forward them to participants, and it comes with a recording feature too. That’s about it actually, there’s nothing more to it.

Things get significantly more interesting when we talk about Hangouts Chat, though. It presents a complete makeover of the rusty old Hangouts and is primarily meant for businesses looking for a Slack alternative. Apart from the usual chatting abilities, Hangouts Chat is as you would expect, tightly integrated with Google’s other services such as Docs and Sheets. Moreover, it supports scripted chat bots, and initially, Google is bundling one of its own too which you can invoke by typing “@meet”. It can look at the schedules of anybody in a group chat and automatically suggest a meeting time — then schedule it directly in Google Calendar.

Hangouts Chat is currently limited to users enrolled in Google’s Early Adopter program but with this, Google at least makes one thing clear about its goals – Hangouts is not meant for general consumers, it’s for enterprises. It’s though, not confirmed, and who knows, Google might come up another messaging app to mess with you. 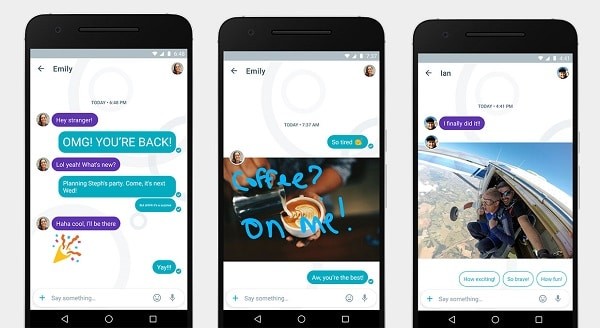 Along with Duo, Google also introduced Allo, a messaging app that features the company’s AI-powered assistant. Therefore, users can trigger the search in chats and get results without leaving the app at all. That’s the only reason this app even exists. Other than that, there’s nothing stirring about it despite the fact that it’s been over 6 months since the original announcement. What’s more surprising is that Duo and Allo are independent apps which do raise some significant questions about what Google is trying to achieve here. They could’ve easily fused both of them together and created a far better experience. Moreover, Allo doesn’t come with any backup options, so your chats will be demolished if you switch phones and did I mention it’s mobile only? 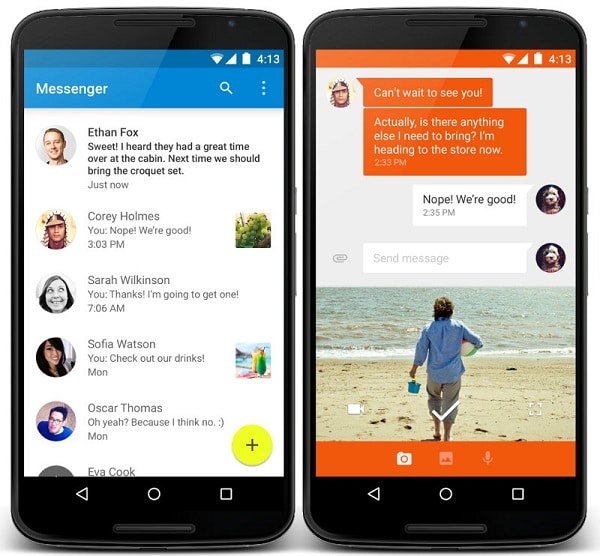 This is a barebones Android app for SMS. Google Messenger is the default application you get if buy a Nexus or Pixel handset. And although it sounds like a platform made to rival Facebook’s Messenger, it’s not. However, the company has added RCS – Rich Communications Service, an upgrade to the SMS standard – to Messenger. It still though cannot compete with Apple or other firms supply.

The bottom line is, Messenger is merely an SMS app. Nothing more. Not yet at least.

Update (10.03.2017): Messenger is now called Android Messages. Another change Google has rolled out since we last checked is the addition of more carriers in their RCS scheme. So, what is RCS?

“Rich Communications Services” essentially, takes SMS one step further. It allows the default SMS app on your phone to support modern content such as high-res photos or videos, location, and more. Android Messages is merely a facilitator of this technology, and its core agenda is to compete with iMessage and provide a universal messaging platform on Android. 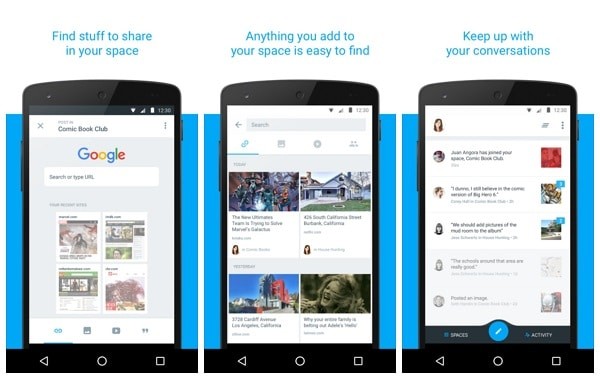 Google Spaces is probably the most intuitive service by Google you never heard of or used. It’s actually not your fault, the majority of people have undermined or misunderstood what Google Spaces really is.

Some slap a tag of “yet another social service” to it and others think Slack is much better. So what Google Spaces is?

The simplest way to define Spaces is it’s a group messaging app with a tight integration of Google services. You create groups or “spaces” for a particular topic, add people, and chat. There’s a private timeline that showcases all the recent activities and you can fire up searches on Google, YouTube right in the chat interface. Think of it as Slack Lite, only this feels less professional.

Google Spaces is brilliant in my opinion. It’s one of the best social environment there exists, however, pulling people away from Facebook or Twitter is nearly impossible and there will be a time when Google will have to shut this down due to the lack of active users. So, go ahead and give it a shot. Oh, did I mention it doesn’t have any signup process?

Update (10.03.2017): As I suspected and predicted, Google recently announced they’re shutting down Spaces in the month of April 2017. So, you can check this one off the list altogether. 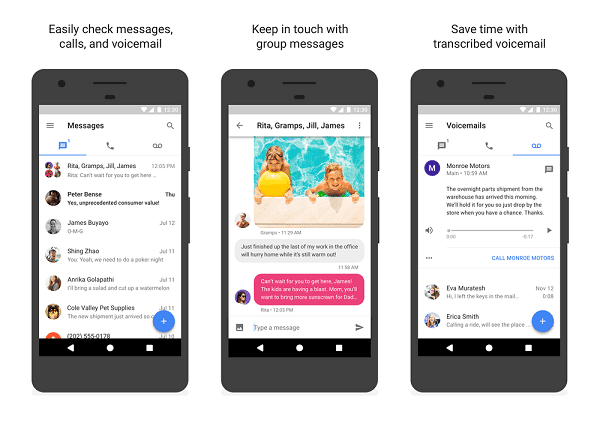 You probably already know what Google Voice is but your memory decided to drop it recently which is acceptable given that the company didn’t update it for FIVE years. The users moved to Hangouts and when they were about to get comfortable there, guess what?! Google updated Voice with a complete material design makeover, new apps, everything.

In case you don’t know what Google Voice is, it’s a telephony service which users in the US can utilize for call forwarding, voicemail, as well as a transcription of the same, voice and text messaging. Google Voice had about 3.5 million accounts in 2013, however, Google sort of abandoned it and most of these users moved to Hangouts or something else. Fortunately, Hangouts don’t need to necessarily switch back as Google mentions that “there’s no need to change to the new apps, but you might want to try them out as we continue to bring new improvements.” which basically means, we are now interested in Google voice, so screw you. Okay, that was a little over the line but it’s mostly true.

Recently, YouTube also added a private chat feature which lets anyone share a video with another user and talk about it inside the YouTube app itself. It’s only available in Canada as of now and extends the company’s efforts to fabricate a true social media experience as they recently also added communities. YouTube Chat is a thing of its own and it will stay there whether you want it or not.

So, that was every messaging app Google owns right now. There are, as you might tell, a lot but none of them is close to perfect. Google’s convoluted take on messaging will eventually hurt them going forward. I hope someday Google decides to annex them all and build something which is comparable to services such as iMessage or even Facebook messenger. And we hope that agenda doesn’t give birth to yet another app. If that happens, send help.

Was this article helpful?
YesNo
TechPP is supported by our audience. We may earn affiliate commissions from buying links on this site.
Read Next
How to Record Your Screen on a Chromebook
#Allo #Duo #google #Google Spaces #Google voice #guide #Hangouts #Messaging