Motorola ushered in the era of Mods with the Moto Z and ever since then we have been witnessing a generous bunch of Moto Mods that bring across an additional layer of utility. Starting from the Hasselblad to the Projector, the mods have been pretty effective in offering the additional features. Called the “Ultimate Moto Z Mod” the new shell style tries to invent on the utilitarian front and offers Wireless charging and IR Blaster. The Moto Mod is only slightly thicker than the usual style shells despite baking the Wireless charger module and the IR blaster. 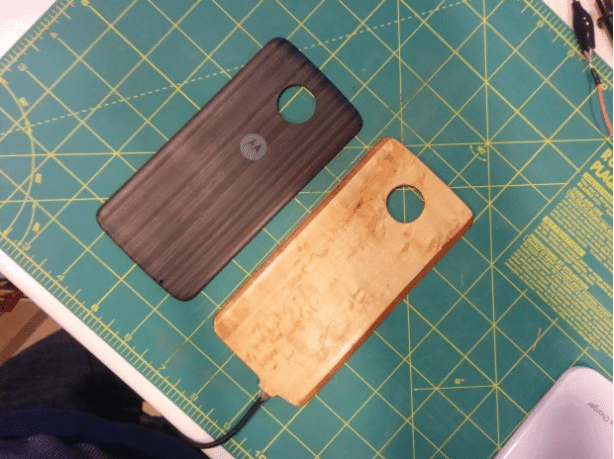 Motorola has always been on the forefront when it comes to customization, it, in fact, started offering Moto Maker options starting from the first generation Moto X. The Motorola Shells add a completely new look to the smartphone without compromising much on the bulk. However, most of the Moto Style shells have mostly been instruments of cosmetic enhancement and do not offer any new features. Alsit’sits worth noting that the maker of this Mod has been a participant in Motorola’s “Transform the Smartphone Challenge.” For this Motorola teamed up with Indiegogo allowing developers to try their hands and build Moto Mods.

The maker of this mod claims that the prototype is almost ready and has also started a campaign on Indiegogo. The prototype offers both wireless and IR blaster feature and increases the thickness by 3mm, which is commendable and perhaps lesser than Moto’s Mod themselves. Motorola has made the Qi wireless charging available through the Moto Mods, however its expensive and kind of meddles with the outlook of the phone, including the thickness. IR blaster can be used to control. estimated shipment date is pegged at November 2017.

As of now the prototype needs to be plugged in but once the final version is ready it would use the Z’s pins to connect and the final product will also bake in the IR blaster. The Moto Mod has been sensibly priced (pledge amount) at $35 while a major lot of other mods cost well over $50. What’s interesting though is how Lenovo-Motorola is attempting to create an entire subset of Mods/accessories, in the future it’s quite possible that we may have a hardware store like app store in order to enhance your smartphone’s utility.

Was this article helpful?
YesNo
TechPP is supported by our audience. We may earn affiliate commissions from buying links on this site.
Read Next
Igloohome Smart Padlock Review: Convenience is Key!
#Indiegogo #Lenovo Moto #Moto Mods #Moto Z