Twitter seems to have joined the bandwagon of popular social networking sites and messaging apps that have started offering “Lite” version of their app. The recent one to join the list was Skype. With the Lite version up and running Twitter wants to catch the fancy of data starved users who prefer for smaller data packs and keep a tab on their internet usage. Needless to say with the Lite version Twitter is mostly aimed at emerging markets and the prospects it holds for the microblogging site. 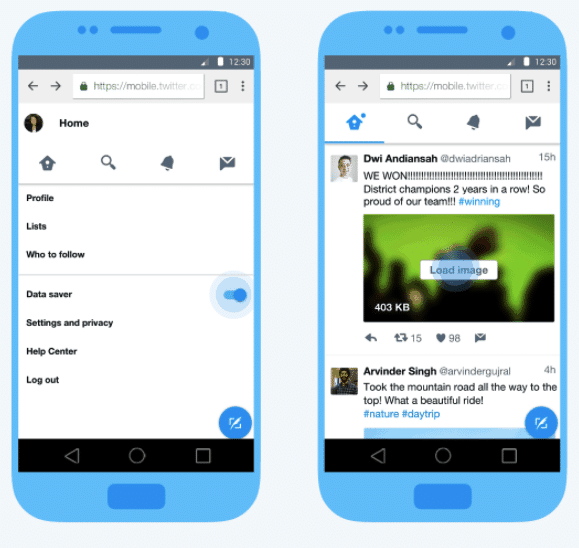 Called the Twitter Lite the app is aimed at non-US users and despite offering the same functionality as its parent app the Lite can be accessed by heading over to mobile.twitter.com from your smartphone. The best part, however, is that despite the absence of an actual app Twitter Lite users will still be getting notifications on their home screen. Facebook was the first one to launch the Lite app in 2015, only to be followed by Skype and YouTube. In fact, the YouTube Go Beta that was made available yesterday has been created with emerging markets in the mind and offers features like the Offline sharing.

“We didn’t feel like we were reaching these other countries well enough, and this will allow us to do it faster, cheaper and with a better experience than we’ve had before”- Keith Coleman, Twitter VP. Furthermore, the company claims that the data usage on the app will go down by 40-percent thanks to some tune-ups made on mobile.twitter.com. Also, the additional data saving feature is further expected to lower the data usage by another 40-percent bringing the cumulative to a whopping 70-percent.

Other countries including Indonesia, the Philippines, Brazil, Argentina and Mexico will also be getting the Twitter Lite. It’s a well-known fact that Twitter is playing catch up with Facebook and despite adding 4-percent last year its user base of 319 million is still overshadowed by Facebook’s 1.9 Billion. It’s worth mentioning that the Lite apps apart from helping us save on data will also help in conserving the smartphone battery, the truth is that I have myself considered to get rid of Twitter, Facebook, YouTube, and use the “Lite” versions in order to test the positive impact it has on battery longevity.

TechPP is supported by our audience. We may earn affiliate commissions from buying links on this site.
Read Next
Simple (bitter) Truth: There is no REAL alternative to Twitter…not yet!
#twitter #Twitter Lite