Want a fitness tracking device but do not want to go for sporty fitness trackers or bulky smartwatches? Well, guess what? All your prayers have just been answered. Timex has added a new member to its watch portfolio, Timex IQ+ Move which looks like a “regular” watch but comes with fitness tracking features. The “analog activity tracker” (yes, that’s what Timex calls it) priced at Rs 9,995 was recently launched in India and comes after the Timex Metropoiltan+ which followed a similar design. But does the hybrid of a smartband and a classic watch hit the mark? Let’s find out. 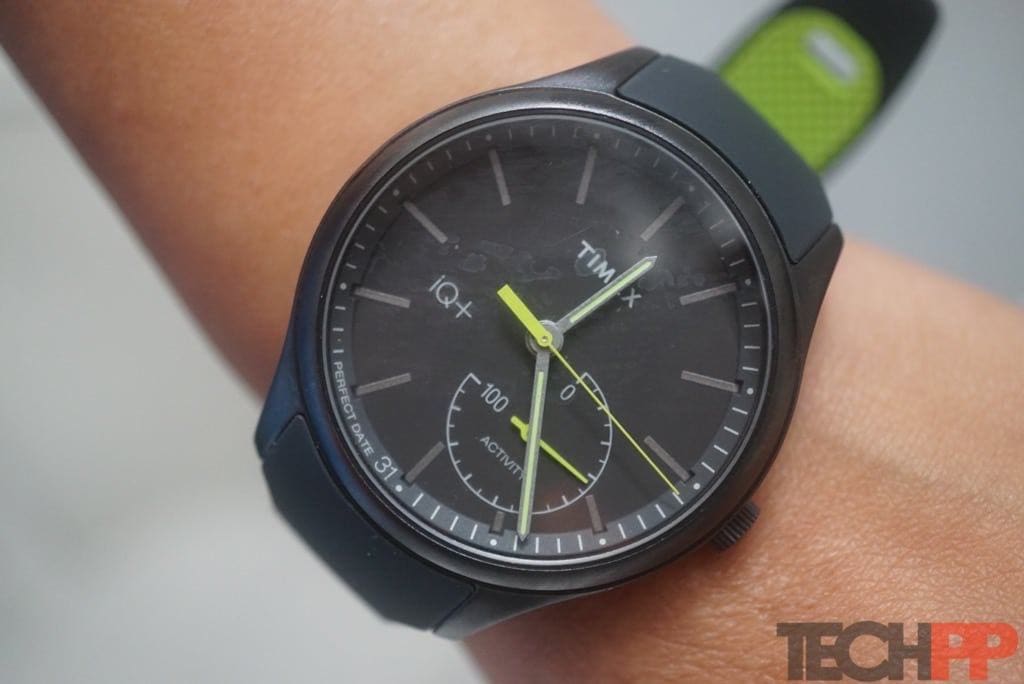 Nothing digital about it, looks wise!

Unlike many smartwatches or smart bands that come with a digital screen, Timex has decided to go old school and has chosen an analog front for the watch. Unlike the Metropolitan+ which did have two crowns and two dials within the main one, the IQ+ looks an out and out watch. It comes with a 41 mm round dial that has a main dial which tells the time, while there is a smaller dial inside which says “activity.” Just like any other the regular analog watch, the Timex IQ+ Move also comes with a crown button that allows you to pair and sync your watch with your smartphone. The model we received was a combination of two colors: gray and light green. While the gray majorly dominates the watch, the green is sprinkled a little inside the dial on the needles, and there is also some on the inside of the strap, giving it a “dual color” appearance.

The strap itself is made up of silicon and the dual color on it makes the watch look more distinct. Although the watch comes with a silicon strap, it does not really feel cheap – it looks pretty classy, although not exactly like a five-figure price tag watch. For those who mind the dual color on the strap, worry not, it really is just on the inside, so it hardly is visible once you wear it. The inner side of the strap which is green in color is slightly textured and provides a firm grip. The band was very comfortable to wear and we did not feel any irritation and nor did any rashes pop up while we had it on – and neither afterward (not yet, anyway). 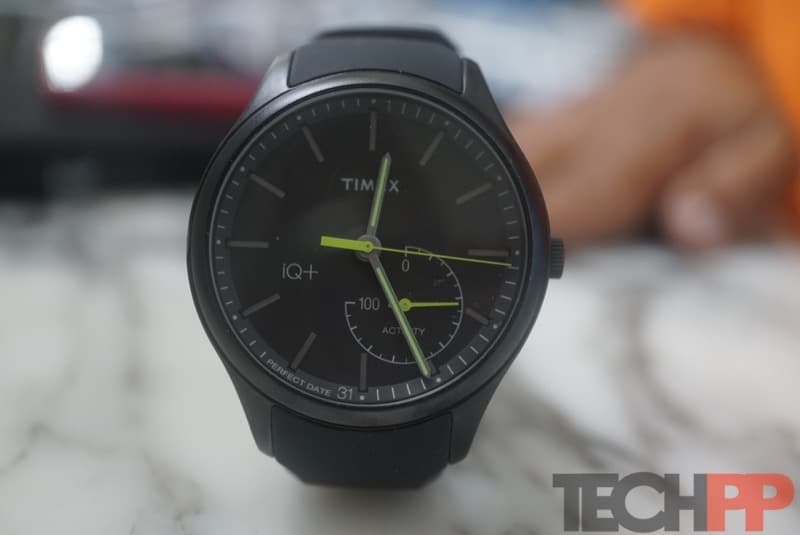 The watch is light and manageable. It did not feel heavy or bulky and although the model we received is meant for men, we feel both the genders can easily flaunt it on their wrists. We had just as many notches as we required on the strap. We did not feel like the watch was constantly moving up and down on the wrist and was quite stable.

In sum, we love the simple, sleek and light design of the watch. The subtle hints of a dual color here and there and the sheer comfort is an added benefit. The fact that the watch looks a stunner on both and men and women also strengthens its case and just in case you were wondering, although it is a silicon strap, we think it will go along just fine with your daily formals, too – that black dial really makes a compelling case.

So, yes the Timex IQ+ Move ticks all the boxes when it comes to the looks, but how well does it do when it comes to performance? The Timex IQ+ Move comes with basic fitness tracking features like step counting, keeping an account of calories burnt, distance traveled and your sleep pattern. To monitor the data, the watch can be paired with an app called Timex Connected which is available on both iOS and Android platforms for free. 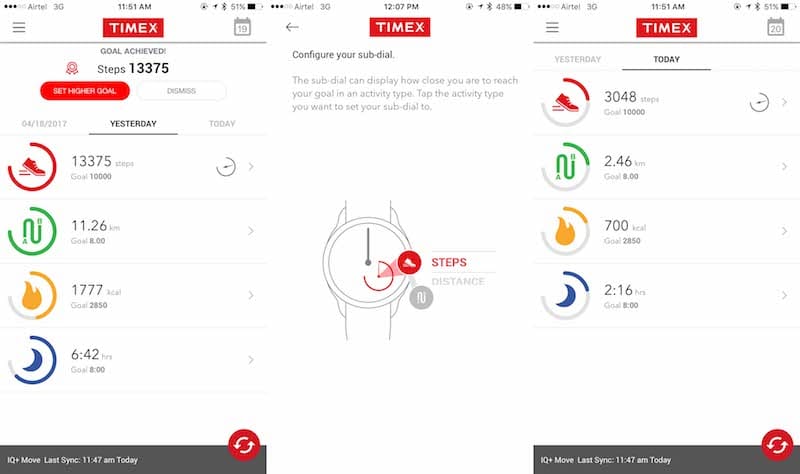 The Timex IQ+ Move has got the basics right. The watch count steps and seems pretty much on point. The sudden movement of hands or some shakes does not hinder the step count. The watch also comes with automatic sleep tracking and does a pretty good and accurate job in that department as well. And it’s not just it, the needle for seconds can also show how close you are to your distance or steps goals you have set, although seeing a stationary seconds needle can be a little disconcerting (we initially thought the watch had stopped!). There is also a secondary dial in the watch which keeps a track of your activity and has a 0-100 measure, giving you a percentage indication of how close you are to your target. Yes, we know that it is not as feature rich as a fitness band or a fancy smartwatch but it easily lands between the two. And hey, it looks better!

The watch does not have a heart rate sensor which is available in the Xiaomi Mi Band 2 (for Rs.1,999) which can be a let-down for some. It does not have a touch screen dial or any other button apart from the crown which can be used to communicate with the device itself. Another point that we think works against the Timex IQ+ Move is that the watch cannot notify you when you get calls or messages, something which is pretty basic when it comes to a number of fitness bands. It does vibrate in a very low-key manner when you set an alarm.

The company claims that the watch is water resistant up to 50 meters which mean you can comfortably take it out for a swim, or even a dive and you do not have to worry about getting mucked. However, it will not be able to keep track of your swims, which sort of limits its utility.

We saved the best for last – unlike many smartwatches and smart bands that come with chargers and have annoying batteries that run out quite easily, the Timex IQ+ Move comes with an old school battery that will last for months before you will face the need to replace it. So this makes it one less item to be charged. Pure bliss, isn’t it? 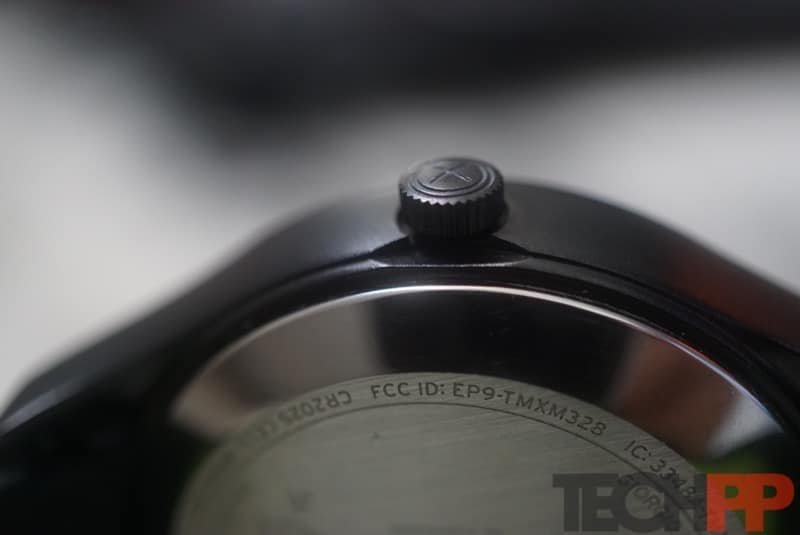 The process of pairing and syncing when it comes to the Timex Connected app is as easy as eating a chocolate brownie topped with ice cream and unfortunately is just as messy as well. We had to align the needles using the on-screen buttons on the app which we think was a little too much – why could we not just use the crown and align the hands, like good old times. That said, the app is light and gets downloaded in a jiffy. It asks you your personal data like name, height, weight, gender, wake time, bedtime amongst other things. Once you have filled all the information the device and set your daily goals and can choose from Less Active, Active and Very Active.

The app is easy to navigate and understand. It has got different colors, for different activities like the step counts and the calories burned, and you can also set alarms and timers from the app, and also set sensor sensitivity (we found it doing just fine at “medium”). The base color is white and the combination of other colors makes it vibrant. However, the syncing process itself is a bit on the complex side – you have to press the crown down for a few seconds, and then see the watch’s hands align to twelve after which they get rearranged to reflect the steps you have taken and so on. Honestly, just hitting the sync button should be enough, shouldn’t it? This is not the happiest side of the analog-digital marriage, we are afraid. We preferred the dual crown solution on the Metropolitan+, with a dedicated crown for “smart”ness.

Not a smartwatch, and proud of it! 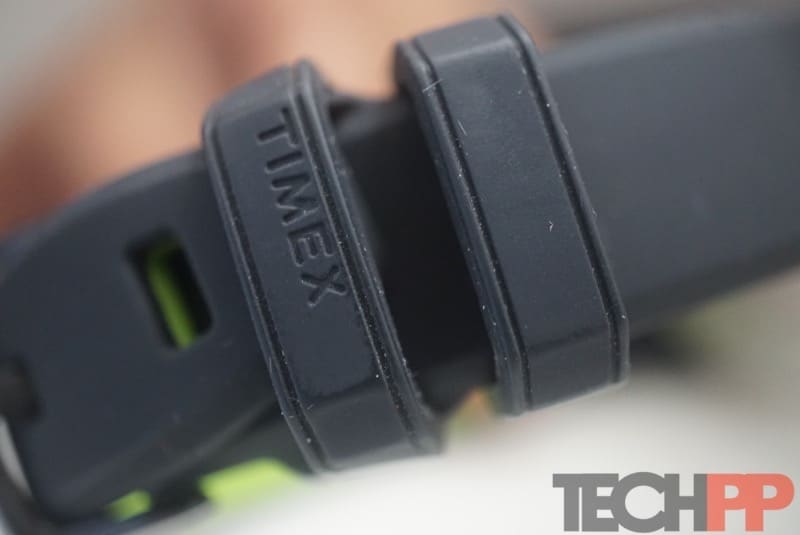 Syncing and setting it up can be a little troublesome, but overall we think, the Timex IQ+ Move did just what it means to do. It is a basic watch with activity tracking features. A bit pricey we reckon but the ones who want a classic looking old school watch and also like to stay on point when it comes to fitness, without having to compromise on classy watch looks and bother about chargers, can definitely go for this one. Smart it is. A smartwatch? No. And for many people, that’s not a bad thing. Not a bad thing at all.

Was this article helpful?
YesNo
TechPP is supported by our audience. We may earn affiliate commissions from buying links on this site.
Read Next
Skullcandy Mod Review: Betting on doing the basics well
#review #Timex #Timex IQ+ Move #wearable