Microsoft inches closer to its Billion users dream as it today announced that Windows 10 has surpassed 500 Million active users every month. The Redmond-based software giant revealed the milestone at its annual Build developer conference. Windows 10 took nearly 21 months to reach this number which in fact, makes it the quickest desktop operating system to do so. 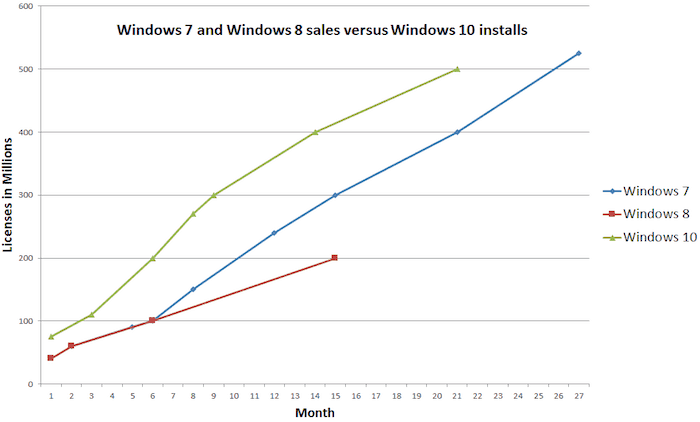 In retrospect, Windows 10 had about 400 Million back in September pointing at a steady growth throughout the almost two years. Microsoft did plan to hit a Billion in two-three years initially, however, they backpedalled on that pretty quickly when the company admitted: “it will take longer than FY18 for us to reach our goal of 1 billion monthly active devices.” It’s also worth noting here that the 500 Million figure includes not only personal computers, but also Xbox gaming consoles, and other platforms Windows 10 services. Additionally, the Windows 10 update was offered entirely free of cost in the majority of the period until now, hence, the real test actually commences from this point for Microsoft.

Windows 10 will continue as a service meaning every user will be able to remain on the latest build as soon as it arrives, all of which have been kept free till now. According to The Verge, Microsoft has been “loosely targeting” 550 million active users every month by the end of next month and 575 million by the end of September. This largely depends on what they’ve in store for us at the Build conference and what the next major version of Windows withholds and more importantly, will it be free?

It will be interesting to see how Microsoft chases its goal for a Billion users in the next couple of years without a promising smartphone division.

Was this article helpful?
YesNo
TechPP is supported by our audience. We may earn affiliate commissions from buying links on this site.
Read Next
How to Request Read Receipts in Microsoft Outlook
#Build 2017 #microsoft #Windows 10