Almost a year after its iOS release, Google has today launched its “Motion Stills” app for Android. The decision seems to be largely because Apple itself has included a wide array of Live Photos editing tools with iOS 11. Anyways, it’s here and ready for your GIF-worthy moments. 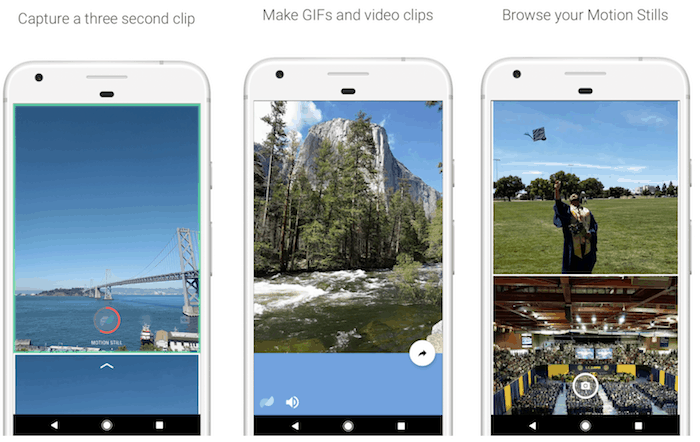 Motion Stills is an app Google released last year for providing iOS users the ability to edit their Live Photos and share them as GIFs. Of course, the application’s Apple-specific features aren’t particularly useful for Android and hence, the company has brought in some nifty new additions for its own operating system.

For starters, Motion Stills allows you to generate iOS’ “Live Photos” on Android where you essentially just need to take a regular picture and the app will automatically create a short GIF out of it. Moreover, Google mentions they’ve built in a few intelligent algorithms which will automatically shed off pocket shots and accidental shakes.

Secondly, you can shoot videos and turn them into GIF files. “Motion Stills” leverages Google’s brilliant capabilities to stabilize videos and hence, it’s able to shoot significantly smoother short-form videos. To achieve this, the app processes each frame of a video as it is being recorded which churns immediate results without any wait times whatsoever.

Lastly, there’s a feature called “Fast Forward”. This enables you to crop a full minute video into a shorter clip. It uses a similar approach we described above and therefore, processes the frames much quickly. You can also adjust the playback speeds from 1x to 8x without adding any sort of jitter or lag.

Google further mentions on its blog, “To make this possible, we encode videos with a denser I-frame spacing to enable efficient seeking and playback. We also employ additional optimizations in the Fast Forward mode. For instance, we apply adaptive temporal downsampling in the linear solver and long-range stabilization for smooth results over the whole sequence.”

Motion Stills is already available on the Play Store as a free download (for devices running Android 5.1 or above) and you can grab it from this link. If you capture a lot of videos, this is certainly worth a try.

Was this article helpful?
YesNo
TechPP is supported by our audience. We may earn affiliate commissions from buying links on this site.
Read Next
How to Use Apple Maps on Android and Windows [2023]
#android #GIFs #google #Motion Stills #videos