When a new technology or a feature is introduced in smartphones, OEMs leave no stone unturned to make it “the” feature, making tall claims. Suddenly, with this one new feature, your smartphone becomes an eligible replacement of gaming consoles, PCs, sound systems, your professional camera, and God alone knows what else. For some time now, cameras have been one of the focal points (pun intended) that can decide the fate of a smartphone in the market. Companies have been improving cameras on smartphones for quite a while, and the latest trend is spreading like wildfire in smartphone country is dual cameras.

When dual cameras were first introduced, they seem to be a feature only for high-end devices, but as they became more popular, the camera couple found its way to the mid-range segment of smartphones. And one of the super tall claims that almost all companies are making is, “DSLR-like” photography experience – and by that, they mean delivering bokeh (in simple English “blurred background”). Almost every phone with dual cameras is now being compared to a DSLR as if two sensors and a blurry background are all it takes to make a DSLR.

How true are these claims? Do these smartphones actually deliver DSLR-like bokeh? Or is this just so much marketing hype? 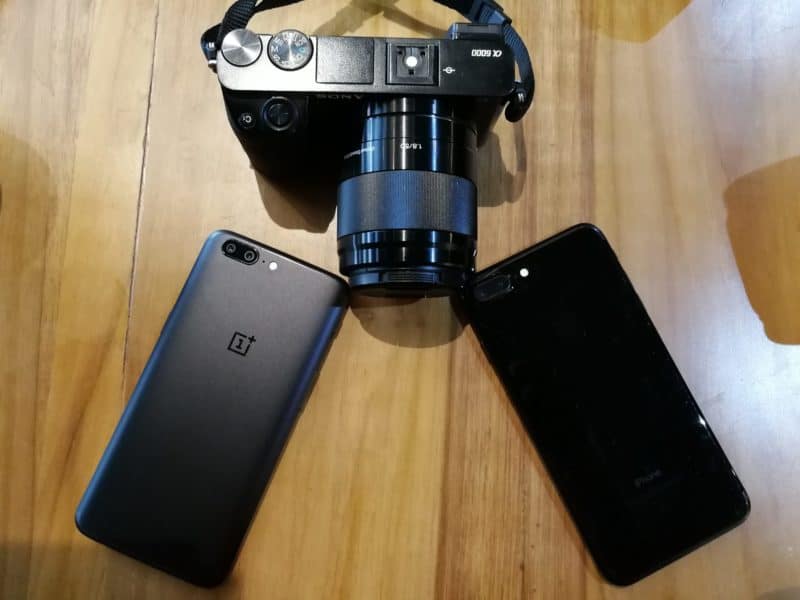 We decided to find out for ourselves. We took some pictures from two dual camera phones – the iPhone 7 Plus and OnePlus 5, both of which boast about their bokeh-laden ‘Portrait Mode’ and we took the same pictures from a mirrorless Sony A6000 (which some might insist is not a classical DSLR but comes very close) with a 50 mm lens (the one used by most photographers for bokeh). And well, depending on your inclination you will not – or will – believe what happened next.

Starting off with some chocolate

A bottle of chocolate milkshake was our first subject. We placed the bottle on a table. We switched to the Portrait Mode on both the OnePlus 5 and iPhone 7 Plus and took shots. The picture taken by the iPhone 7 Plus produced a very deep bokeh and highlighted the subject in the foreground. It also produced colors that were very realistic and were not tweaked as such. But the phone did not really do justice to the blurriness and also blurred out the “Chai Point” written on the bottle. Also, if you observe closely, the cap of the bottle is also partly blurred out. The rest of the bottle in focus has great detail, but the camera misses the mark in some places.

On the OnePlus 5, the results were a little different. The camera couple did a good job in outlining the product.There was no part of the bottle which was blurred out in the picture. That said, the bokeh on the OnePlus 5 was not as deep as that produced by the iPhone 7 Plus. And along with focusing on the bottle of milkshake, the camera also kept a lot of other elements in front of it in focus which made the picture a little cluttered. The OnePlus 5 also made the chocolate milkshake look pink, and all the other elements in the pictures were a tad oversaturated as well.

Then came the representative of the camera segment – we used the Sony A6000 camera with a 50 mm lens to take the picture. And this time, the result was very different. The camera not only produced very deep bokeh but also highlighted the product really well. The subject pretty much jumps at you when you look at the picture which seemed missing in the first two cases. The chocolate milkshake bottle is defined way better, and the edges are sharp, unlike the first two pictures where the edges were dissolving with the bokeh-ed background. This picture was well detailed and did not have any color issues as well, and although the colors produced by the iPhone 7 Plus and the A6000 were pretty much the same, the bokeh result and the detailing was not.

Sorry phones, you got shown up. And yes, the chocolate shake was not too bad either.

For the second picture, we changed things a little and instead of having just any subject we chose our favorite human subject, i.e., our Editorial Mentor. On the iPhone 7 Plus, there were not as many random blurry bits as there were in the first picture and bokeh again was very deep. The camera lacked detailing, but the color reproduction was good and accurate.

The OnePlus 5 also delivered a bokeh-ed background, and we found the details produced by the OnePlus 5 to be better. But as we zoomed in, we realized that the bokeh was not clean and precise in this picture. The colors too were a little over saturated, even though the background was efficiently blurred out. 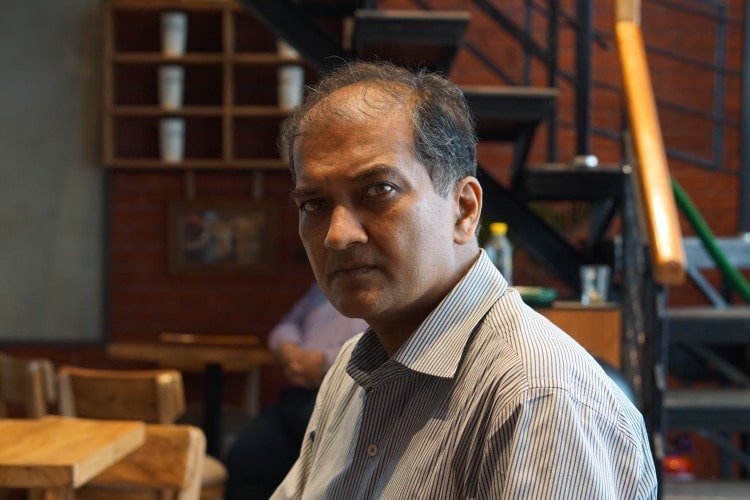 The Sony A6000 then came into in the picture. Literally. And once again gave us an image which pretty much had it all. The picture taken by the Sony A6000 had the right amount of bokeh – it made the subject stand out and differentiated it clearly from the background and at the same time. Most importantly, the picture did not look like it was generated through software (which often happens in the case of smartphone cameras). The edges were beautifully covered and clean. We just wanted our subject in focus, and that is what we got. Nothing else. The detail was on point, and the colors were also accurate. All in all, the Sony A6000 again smashed the competition. This was getting embarrassing.

From human to objects. And being in tech, we chose the 2016 MacBook Pro to be our model. The iPhone 7 Plus did a great job in this round (of course it would – the Apple connection!). The Portrait mode worked beautifully for the MacBook Pro. The silver gray Apple device was placed on a brown coffee table, and while there was a lot going on in the background, the smartphone pretty much made everything else disappear. It was just about the MacBook Pro. Upon inspecting closely, however, we had the same issues where we thought the bokeh was not inch perfect and it missed out the edges of the device but that said, the picture did score in the detailing and color segments.

The OnePlus 5 also did a good job with bokeh and this time around we were not at all disappointed with how sharply it covered our subject. The bokeh was pretty well established around the MacBook Pro, and the camera scored well in the detail department as well, but if there is one thing we would like to change in the OnePlus 5 camera, it definitely will be the color reproduction which was time and again saturating the setting. 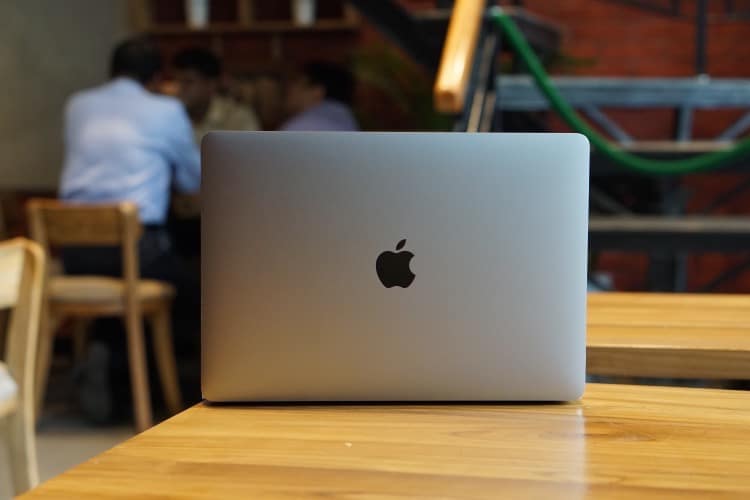 Then came the Sony A6000. Its competitors had done an outstanding job, to the extent of making us wonder if there was a scope of significant improvement. Well, the Sony A6000 had this one round in its bag yet again. Hands down. While we did like how the iPhone 7 Plus and OnePlus 5 pictures turned out, the one captured by the Sony A6000 hit a home run even on the third strike. The MacBook Pro was highlighted very well – we could easily differentiate the background and the foreground as it popped out and the camera also managed to get a great score in detail and color reproduction. The Sony A6000 again took the prize money home.

Lower the lights…and bring on the bokeh!

For the final round, we decided to change the setting a bit and decided to take pictures in a slightly darker light. This time around our model was a Starbucks paper coffee cup. The iPhone 7 Plus did highlight the product well to make it stand out from the background. One thing we really appreciate about the iPhone 7 Plus is the color reproduction of the pictures that we took – the camera was consistent, and we knew what we were going to get. But detailing was sacrificed in this shot and although the bokeh was extremely deep, the straw was blurred out, making it appear software rather than hardware induced.

The OnePlus 5 performed just a bit better than the iPhone 7 Plus. The detailing was better in this picture than it was in the iPhone 7 Plus’ case and captured more light. That said, the bokeh was very shallow. While the iPhone just made the straw go blurry, but it did merge with the background, the OnePlus 5 blurred out everything except for the cup but the straw still stood out, and the bokeh in the picture seemed very inconsistent, making the picture look a little unreal.

And this is going to sound predictable, but the Sony A6000 again managed to blow its competitors out of the water. The low light performance of the camera was amazing. The Starbucks coffee cup was jumping out of the background, and the bokeh surrounded the cup beautifully. In the phone pictures we had issues with the dual cameras blurring out the straws – in this case, the camera not only highlighted the cup but the straw was an integral part as well, and the detailing was amazingly precise. 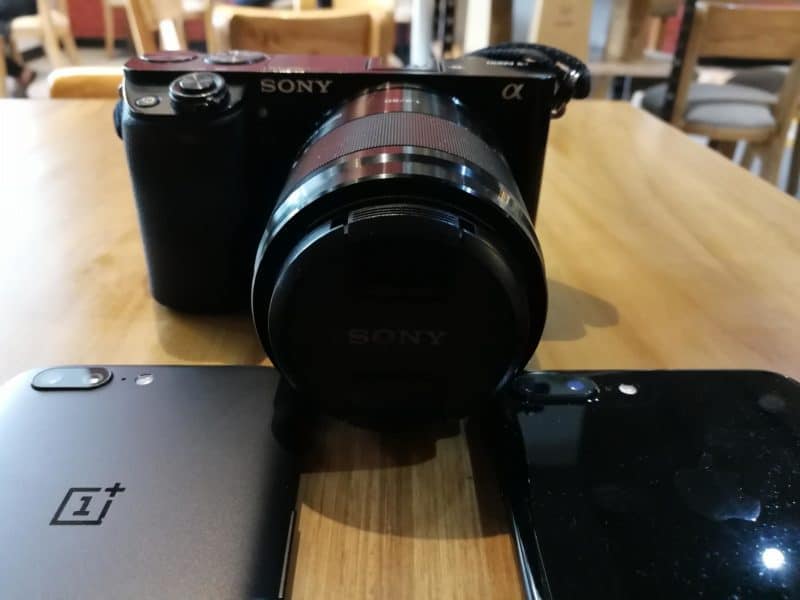 You do not have to be a wizard to figure out who came out on top in this bokeh battle. In each of the four examples, the Sony A6000 pretty much swept the floor with its phone competitors, showing the difference a device dedicated to photography can make. The camera showed why it is a device dedicated to take pictures and what difference can it make to your photos. Its bokeh seemed strongest by far, and what’s more, it did not seem in the least artificial, as the subject in focus remained very much in focus and had no partially blurred out bits. Yes, the pictures taken by the iPhone 7 Plus and OnePlus 5 were remarkable for a pair of phones. But we think the two devices just could not compare with the A6000 in the bokeh business, no matter what they had.

So, the next time a smartphone company tries to tell you how its phone camera can create bokeh as good as a DSLR, think about it once (or may be twice) and then politely disagree.

Because it just does not.

Was this article helpful?
YesNo
TechPP is supported by our audience. We may earn affiliate commissions from buying links on this site.
Read Next
Snapdragon 782G vs Snapdragon 778G Plus: What Has Changed?
#Bokeh #comparison #DSLR #Dual Camera #iPhone 7 Plus #OnePlus 5 #Photography #Portrait Mode #Sony A6000