It is exactly a year since Google announced their new Pixel lineup, one that replaced the earnest Nexus series. Ever since then the Pixel has made a place for itself in the premium smartphone market and despite its fair share of limitations, the smartphone has been successful enough to deserve a successor. Google has announced the Pixel 2 at the ongoing Hardware event held at SF Jazz Center. Google Pixel 2 is manufactured by HTC and its perhaps for this reason that the former acquired the HTC. 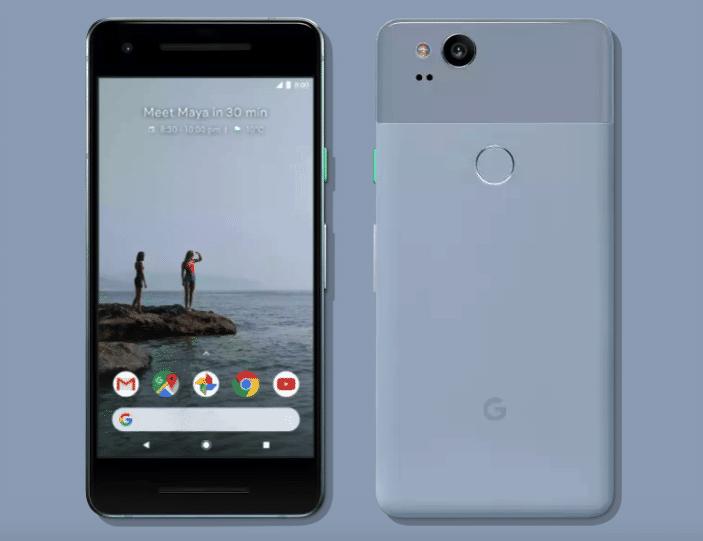 This time around the Pixel 2 comes powered by a Snapdragon 835 paired with 4GB of RAM. The display on the Pixel 2 is a 5-inch FHD display along with Corning Gorilla 5 protection. Unlike the Pixel 2 XL, the Pixel 2 retains the bezels.

The Google Pixel 2 comes with a dual front firing speakers and the fingerprint sensor lies at the back. Design wise the Pixel looks identical to the one that was leaked earlier, so nothing much left to our imagination. Another important feature is that Google has fitted a circular polarizer so one can look at the display even whilst wearing their Polaroid glass. Just like its predecessor the Pixel 2 also comes with an always-on display that lets users “Peek” at the notification without actually waking up the display.

Google has also integrated an always-on music detection service that works similar to Shazam. Whenever you hear a music being played simply type on the music icon on the home screen and voila the phone will take you to the music album. In the meanwhile, the top comes with an “at a glance” widget that shows meetings. Google seems to have taken a leaf out of  HTC’s playbook (ironic!) and lets users squeeze the edge to launch the Assistant. That apart Google will continue to honour its promise of always being the first one to get the OS and security updates.

Moving on, the Google Lens will recognise phone numbers, addresses and other stuff from billboards. The best part is that the Google Lens is contextual in nature and you can ask it about the other things it sees. Google also showed how the Lens is capable of identifying objects in a scene like a furniture made out of wood or a purse made out of leather.

Google has also worked on ARcore and offers Pixel exclusive AR Stickers that not only interact with the environment but also with each other. The Pixel 2 camera is apparently one of the best smartphone camera’s and this is further asserted by the Dxo Rating that scores Pixel 2 at 98. Google Pixel 2 uses machine learning to replace the bokeh mode by using a single lens. Motion Photos is a feature that is akin to the Apple Live and it captures the first and the last three seconds of your photo. Pixel 2 users will continue to get unlimited storage even for 4K videos.

The Pixel 2 is available for preorder and starts at $649 for the 64GB variant. The device will be available across US, Australia, India, Germany, UK and Canada.

Was this article helpful?
YesNo
TechPP is supported by our audience. We may earn affiliate commissions from buying links on this site.
Read Next
How to Fix Google Chrome Translate Not Working
#google #Pixel 2