If there is one thing even the most ardent Apple haters cannot deny, it is the fact that the iPhone’s camera has pretty much been the benchmark for smartphone cameras for quite a while. We have seen some exceptional cameras on Android devices as well, but Apple has been consistently offering great cameras on the iPhones since well, forever. But this does not mean there is no competition – just ask those who swear by the shooters on the Samsung Galaxy S and Note series. 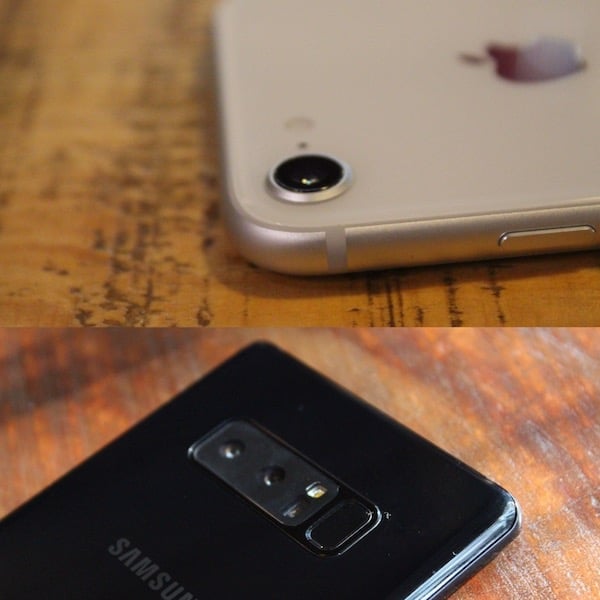 So when we had the Galaxy Note 8 and the iPhone 8, to shoot was but natural. We got some great shots. But one picture, in particular, made our eyes pop. Now, do not get your hopes high – this is not THE iPhone 8 vs. Galaxy Note 8 Camera shootout. This is not really the ultimate judge of which camera is better amongst the two.

But what a picture it is.

One of the most difficult things to capture on a smartphone camera (actually, even a point and shoot camera) can be a spider’s web. This is because the web is finely textured and the camera often ends up focussing on what is behind it rather than on the web itself. So when we saw one, we decided to give it a go – the Samsung Galaxy Note 8’s dual cameras against the single one on the iPhone 8 (we would have used the 8 Plus but by some quirk, it was out of battery).

We took a macro shot of a spider’s web around two iron pillars. In both cases, the images are taken in auto mode without any filters or editing whatsoever.

To quote a website we know very well; you won’t believe what happened next.

In image number one, the first thing that really jumps at you is the spider’s web – the subject of our pictures. You can literally see each and every strand that is there in this spider’s web. And zooming in just makes things even better. As we zoomed in, the rings of the nut on the pillar and the spider’s web together created a lot of depth in the image. You can see the rusting on the iron rods, and although it is blurred out, even the texture of the pillar emerges in the image. The camera that took image one has even reproduced colors beautifully. It is super close to the real setting without any tweaks.

Another thing that we loved about this image was the quality of bokeh. This image does not have a lot of elements in the background to blur out, but the camera, in this case, has definitely created a very deep and sharp bokeh around the subject and has blurred out whatever there is in the background pretty well. This not only adds another dimension to the picture but also helps the subject stand out.

And all this just took one tap on the subject to lock the focus, one second of hold and voila! We got the result we were looking for.

Well, we expected an equally brilliant image from the second camera, given the reputations of the devices involved. But we were a little disappointed. First off, the camera could not focus on the web from as close as the first device. We had to change the angle and distance a bit before we could get the web in the picture. And even then, we could not see each strand of the spider’s web as clearly as we saw in the image one. Some strands were visible, but others were not.

But just like image number one, this one too impressed us with its overall quality. Zooming in was a pleasure to the eyes as we got a very well detailed image. We could see the rust on the iron, the rings around the screw and all this added a lot of texture to the image. Regarding color reproduction, this image was leaning slightly towards a bit of oversaturation, and the warm colors like red and yellow seemed a bit brighter than the real setting.

That said, we were also a little disappointed with the bokeh quality, which just did not match the bokeh on the first one (perhaps because we had to step away a bit further from the subject to get it into focus). In the first image, the camera had blurred out the iron pillars and the background well, while in this case, everything in the foreground was in focus which took away from the dimension present in the image, although it did blur out the background well.

And then there was the whole effort that went into taking the snap. In the first case, we just had to tap to focus, hold and click and that too from very close to the subject, while here we had to focus multiple times, we had to step a little away for the phone to be able to focus on the web.

Now that’s we have analyzed the two images, it is time to reveal which camera took image one and which captured image two. Well, logic would seem to dictate that the dual camera-laden Samsung Galaxy Note 8 would have taken the first snap. But surprise! The first image is taken by the iPhone 8 which has a single 12-megapixel primary camera. Yes, the iPhone 8’s camera captured the image in the new HEIC format, while the Note 8 went with JPG, but we made absolutely no changes to the default settings.

No, this does not mean conclusively that the iPhone 8’s camera is better than that of the Galaxy Note 8 – we have seen the latter take some brilliant shots, and even in this case it did not exactly disgrace itself. Who knows, if we had tweaked settings, it might even have come out on top – the Note 8 does possess some seriously hefty imaging hardware and software. This was a simple point and shoot snapping – what most people do with smartphones!

What the two pictures, however, do prove is that a single camera can sometimes outgun a pair of dual cameras. This was a particularly difficult shot, and the iPhone 8 handled it with sheer elan. You know, Google might be on to something by hanging onto a single camera on the new Pixels. And yes, we are not only going to compare the iPhone 8 Plus’ camera with that of the Galaxy Note 8, but with that of its smaller brethren too.

Was this article helpful?
YesNo
TechPP is supported by our audience. We may earn affiliate commissions from buying links on this site.
Read Next
Snapdragon 782G vs Snapdragon 778G Plus: What Has Changed?
#comparison #Galaxy Note 8 #iPhone 8 #Photography