Huawei today introduced a slew of new phones under its flagship P-series smartphone lineup. One of these is the Huawei P20 Pro which features not two but three camera sensors on the rear. As the leaks suggested, the phone also borrows a ton of design cues from the iPhone X including an all-glass exterior and a notch-equipped display. 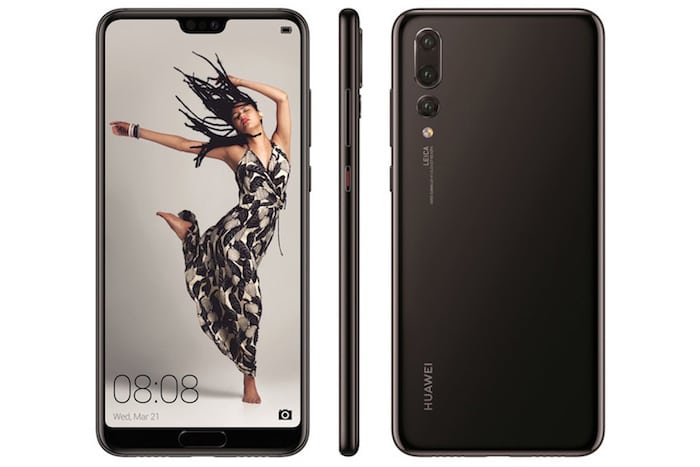 The biggest highlight of the new P20 Pro is, of course, the endless stream of Leica-branded lenses on the rear. It comes with an 8-megapixel optically stabilized telephoto sensor, a 20-megapixel monochrome one, and lastly, a 40-megapixel RGB camera. Together, these enable features such as hybrid 5X zoom which combines optical and digital data from the telephoto and 40-megapixel lens, depth of field effects, and more. The phone can also record slow-mo videos at 960 frames per second, although only in 720p resolution.

Moreover, Huawei has added a handful of nifty software tricks for the camera. One of them is something called Huawei AIS which improves stabilization and allows you to capture long-exposure shots without a tripod. In addition to that, there’s a feature called “4D predictive focus” that helps you lock the focus on moving objects.

On the front, you’ll find a 24-megapixel selfie camera as well. It supports 3D Portrait Lightning and Portrait Mode as well. Both the front and rear cameras have a technology called “Light Fusion”. It essentially allows the sensor to combine four adjacent pixels into one and hence, generate clearer, brighter shots.

The Huawei P20 Pro features a 6.1-inch OLED Full HD+ display on the front and is powered by the company’s own Kirin 970 octa-core processor. There’s a 4000mAh battery which supports quick charging, although cannot be wirelessly topped up despite the glass body.

In addition to that, it comes with 6GB of RAM and 128GB of internal storage which is not compatible with an SD card. In addition to the fingerprint sensor on the front, the P20 Pro can be also unlocked with a face. Although, unlike the iPhone X, there are no special sensors here. It comes preloaded with Android 8.1 with Huawei’s own EMUI skin on top. The Huawei P20 Pro is also compatible with Google’s Augmented Reality platform, ARCore. There are not a ton of apps and games available right now, but whenever they do, it will be able to run them.

There are four color options to choose from — Twilight, Pink Gold, Black, and Midnight Blue. The Twilight shade is an iridescent color blended with a mix of purple and turquoise. The one thing Huawei’s P20 Pro doesn’t have is an affordable price tag. It costs 900 euros (~$1100) in Europe and will be available soon.

Also read: 5 Huawei P20 Pro Features that are ‘Pro’ Over the Regular P20

Was this article helpful?
YesNo
TechPP is supported by our audience. We may earn affiliate commissions from buying links on this site.
Read Next
Huawei FreeBuds 4i Review: A Well-Rounded ANC Performer for Its Price
#Huawei #Huawei p20 pro