Dell’s XPS 13 lineup has been the gold standard in the ultrabook market for years now. Part of it is because it pioneered the trend which led to laptops that are both portable and powerful. And over these years, the PC maker has managed to perfect its nearly flawless formula. So how do you recreate the same balance and still offer enough compelling reasons to justify an annual upgrade?

The answer to that question is complicated. And that shows in the company’s new XPS 13 which, while comes with a slew of refreshments, also packs a bag of compromises to accommodate those changes. But are those enough to be a dealbreaker? 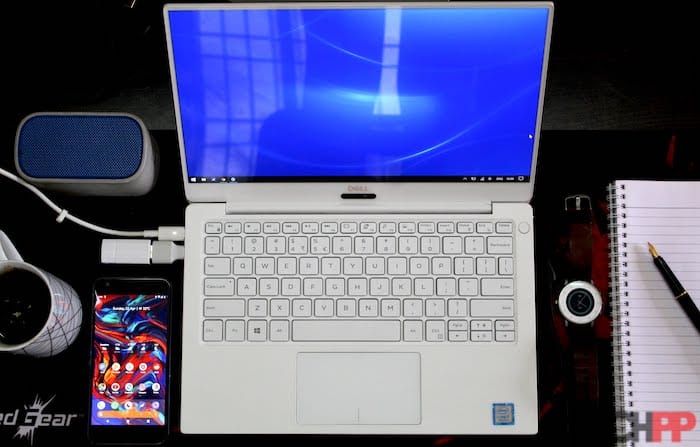 The new XPS 13, like its predecessors, is, first and foremost, all about that 13.3-inch edge-to-edge screen. This time, Dell has managed to cut down even more bezels yielding a panel which is stupendous. It’s bright, vivid, and has ample brightness if you’re someone who likes to work outdoors. However, it is a little reflective but not as much as to ruin the experience. 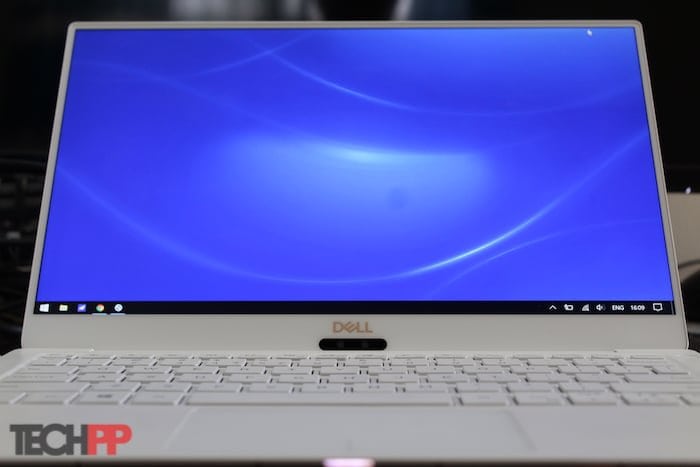 The lack of bezels also means the Dell XPS 13 is incredibly compact. In fact, one of my colleagues kept wondering repeatedly if it’s an 11-inch display. Since there’s no space at the top of the screen, the webcam like before is still situated at the bottom. Although, Dell has moved it from the left corner to the middle making it slightly less awkward. During video calls, you will still have to deal with that in-your-nose angle and your fingers will block the view if you type.

It’s also quite lightweight and most of the times, I didn’t even feel there’s a 13-inch laptop in my backpack. However, I should clarify that there’s enough heft for it not seem like a toy. The lid is on the heavier side, though because of which you cannot open it with a single hand. 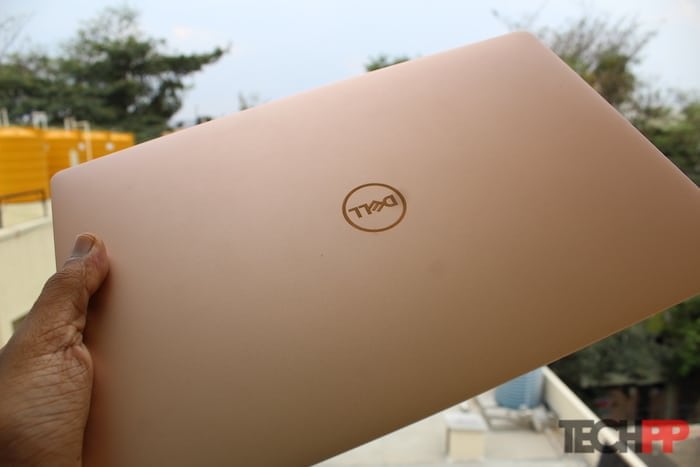 The XPS 13’s exterior is equally impressive. It’s made out premium materials and has a sleek, classy aesthetic that’s both unique and beautiful. The gold-white color option especially is a breath of fresh air in this world of gray and metal. Speaking of that color variant, it employs a new woven fiber coating for the keyboard area instead of carbon fiber. It largely feels the same with one key difference — it’s stain proof that means if you drop, for instance, mustard on it, you can easily clean it without worrying about yellow-ish residues.

Dell has also retained the battery indicator on the left which is a nice touch. What it hasn’t are legacy ports. The XPS 13 has succumbed to the hegemony of Type C and comes with zero traditional I/Os like a USB Type-A. Instead, you get three USB Type-C, a headphone jack, and one of the more disappointing aspects of the laptop — a microSD card slot instead of a full-size one. As of today, the USB Type-C transition will be a little rough as most of the accessories are exceedingly expensive. Thankfully, Dell, unlike other manufacturers, is kind enough to bundle a USB Type-C to Type-A dongle in the box. 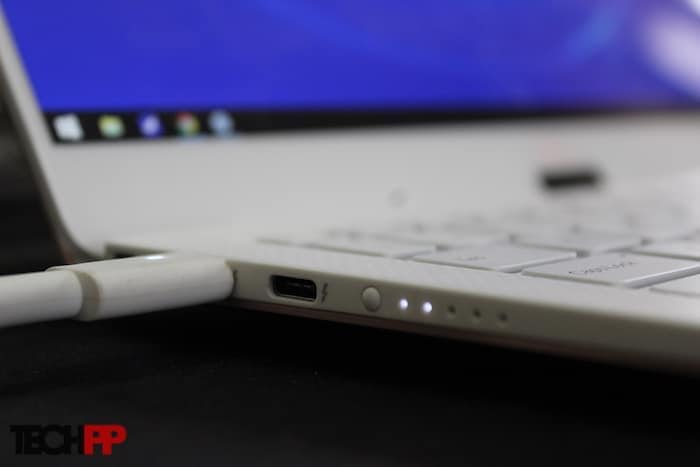 The keyboard is a joy to type on as well. Thanks to the wide keys and 1.3mm of travel, my fingers naturally glided across the board. The soft, comfortable palm rest supplements that experience and constantly reminds you that you’re operating a premium product. It’s also surprisingly tactile, although I do have one pet peeve with it — the arrow keys have a cramped layout. That being said, you’ll probably get used to it in a couple of days. Like previous Dell laptops, this one also only has three levels of backlighting, one of which turns it off completely. The trackpad is excellent as well and supports all the Windows gestures. 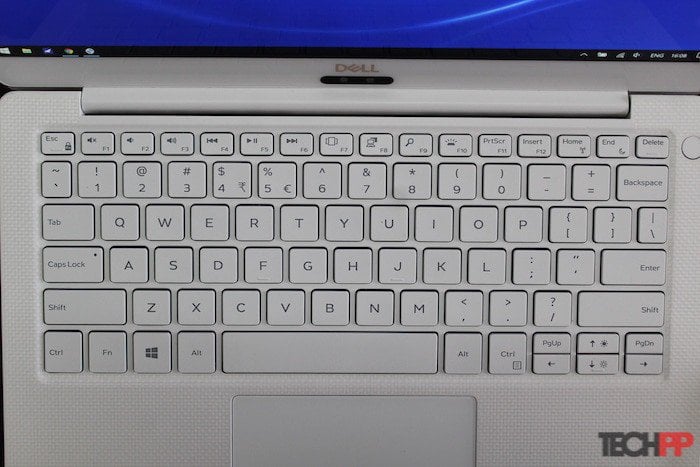 The XPS 13’s other big highlight is the number of ways it can be unlocked with. There’s your usual password and PIN, of course. But the XPS 13 also features IR sensors so that it can authenticate with just your face. That’s not all. A fingerprint sensor has been embedded in the power key as well for when you don’t feel showing your face or are working under bright lighting. All the methods function as advertised and in the majority of scenarios, the XPS 13 would unlock as soon as I sit in my chair and face it. 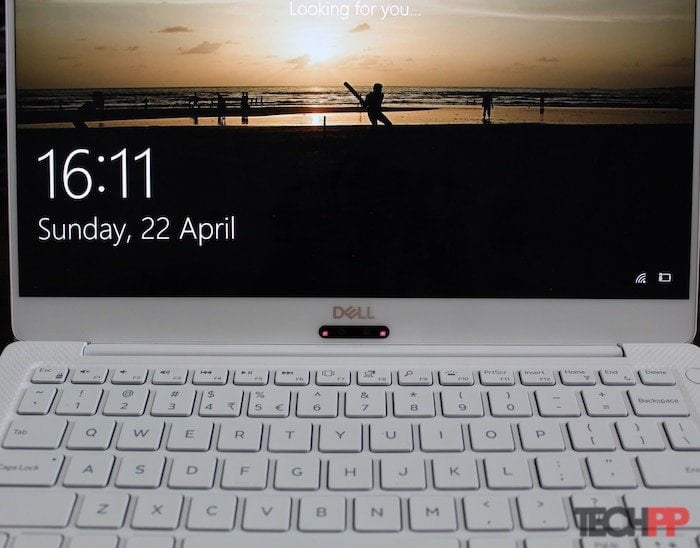 The stereo speakers are above average and are lucid as well as loud even at higher volume levels. They’re even capable of producing a little bit of bass. The preloaded MaxxAudio Pro app lets you fine-tune its various attributes and settings too. However, I came across a rather regular Bluetooth bug which would skip audio at times specifically when you pause and then play a file again.

In spite of being smaller than ever, the XPS 13 comes with all the power you’ll ever need. It’s powered by Intel’s 8th-Gen chipsets, 8 or 16GB of RAM, 256 or 512GB of SSD, and the integrated UHD Graphics 620. Whether it is maneuvering between a multitude of Chrome tabs or streaming 4K content, the XPS 13 just flies except, of course, if you intend to play games. The lack of a dedicated GPU means gaming is not the XPS 13’s strong suit. Even with titles like CS GO, it was able to produce merely 20fps on the lowest settings which are clearly way below the average.

Two of the XPS 13’s Type-C ports are, thankfully, Thunderbolt 3 compliant. Therefore, you can connect it to an external GPU. I’m also, though, glad to report there aren’t any critical heating issues. Although, since we were testing the i7 variant, it did occasionally get warm at the bottom but nothing serious. 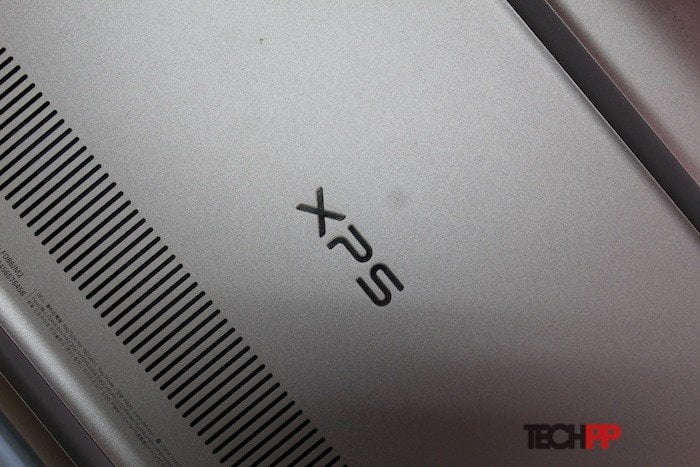 The Dell XPS 13 comes preloaded with Windows 10 Home and in addition to that, offers one of complimentary access to Microsoft Office Home and McAfee LiveSafe antivirus ecosystem. There’s not much bloatware except for a couple of Dell apps such as MaxxAudio Pro. There’s an app called Dell MobileConnect as well which lets you mirror and control your phone’s screen on the laptop. Therefore, for instance if you’d like to book a cab, you don’t need to reach out to your phone. You can simply do it on the XPS 13 if it’s connected.

There is one key area which Dell had to pare down to achieve such as a compact form factor — the battery. That being said, it was easily able to reach six hours on a single charge which considering the i7 processor and the 4K screen, is not at all disappointing. There is clearly room for improvement here as other only slightly larger laptops have managed to attain double-digit stamina. Speaking of the battery, the Type-C charger of the XPS 13 is incredibly small as well and I am cannot stress enough how convenient it is to plug it in from either side.

The Dell XPS 13 takes a step towards the future but ends up sacrificing a bunch of essentials. But in a way, it’s also kind of like moving on for the XPS line and that’s a good thing if you ask me. Dell is preparing one of its most iconic ultrabook series in the most sensible way possible like bundling a free dongle and retaining the cores for which the XPS 13 is known for. And I’m looking forward to what they come up with next year.

At a starting price of Rs 97,770, the Dell XPS 13 is certainly on par with the competition and if you live with its downsides like the MicroSD card slot, an average battery life and no touchscreen on the entry-level models, it’s certainly worth purchasing.