It was the device that stole some of the spotlights from ‘Showstopper’, as Xiaomi called its Xiaomi 12 Pro flagship at its launch. That was because the Xiaomi Pad 5 saw the brand return to the Indian tablet market after a long interval (its last tablet launch in India was in 2015). Unlike its previous tablet, which had catered to the lower budget segment (it started at Rs 12,999), the Xiaomi Pad 5 takes aim at a more expensive segment and actually gets very close to iPad territory. The big question, of course, is whether it can actually rattle the cage of the OG tablet. 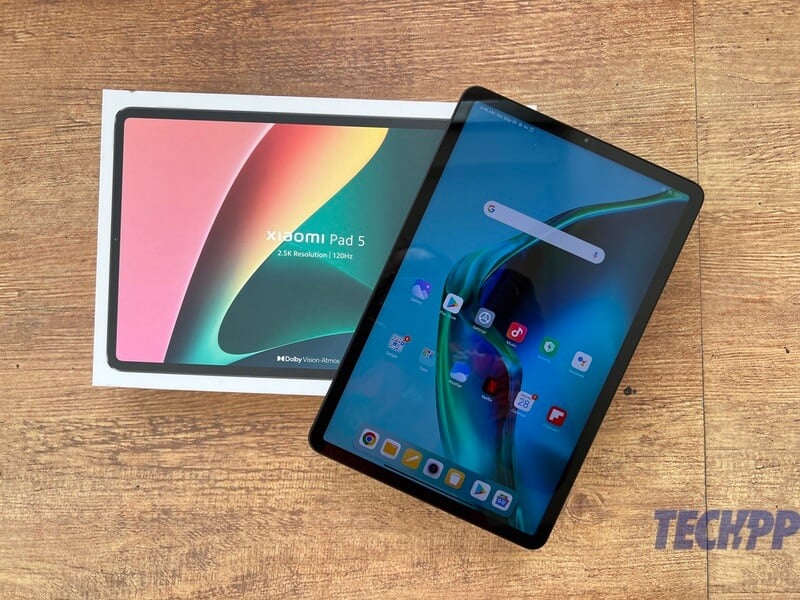 We have been a little taken aback to see a lot of folks saying that the Xiaomi Pad 5 looks like the iPad or even the iPad Air. Well, to be brutally honest, it does not. Its back is shiny plastic rather than metal; it comes with a very different-looking camera unit on the back, and while some might see shades of the iPad Air in the straight sides and the narrow bezels around the display on the front, its display’s 16:10 aspect ratio is very different from the 3:2 of the iPad. In simple terms, the Xiaomi Pad 5 looks more rectangular as compared to the square-shaped iPad.

It looks very smart, though. The back might be plastic, but feels very solid and has a subtle shine. The frame is metal, and the straight sides go with the current trend, with the volume rocker and stylus charging pad on one side, the pins for connecting a keyboard on another, the USB Type-C port flanked by speaker grilles on the base, and the power/display button on top, next to two more speaker grilles. 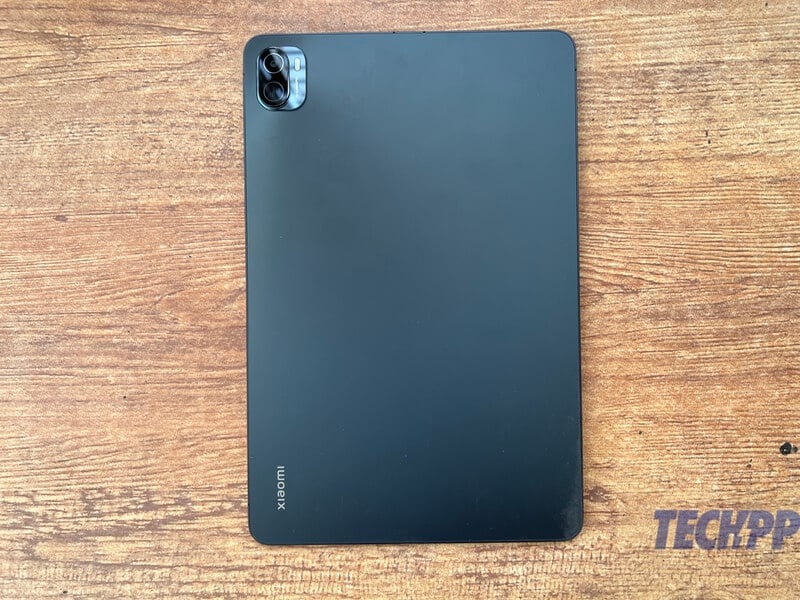 There is no fingerprint sensor or 3.5 mm audio jack (even the iPad has one). The camera unit on the back houses only a single sensor despite giving the impression of having two, but this is a very smart-looking tablet. The Xiaomi Pad 5 is impressively slim at 6.85 mm and is only slightly heavier than the iPad at 511 grams, even though it packs in a bigger 10.9-inch display as compared to the 10.2-inch one on the iPad. It is comfortable enough to carry in your hand and will fit into most bags without any trouble.

Bringing some hefty hardware to the table(t) 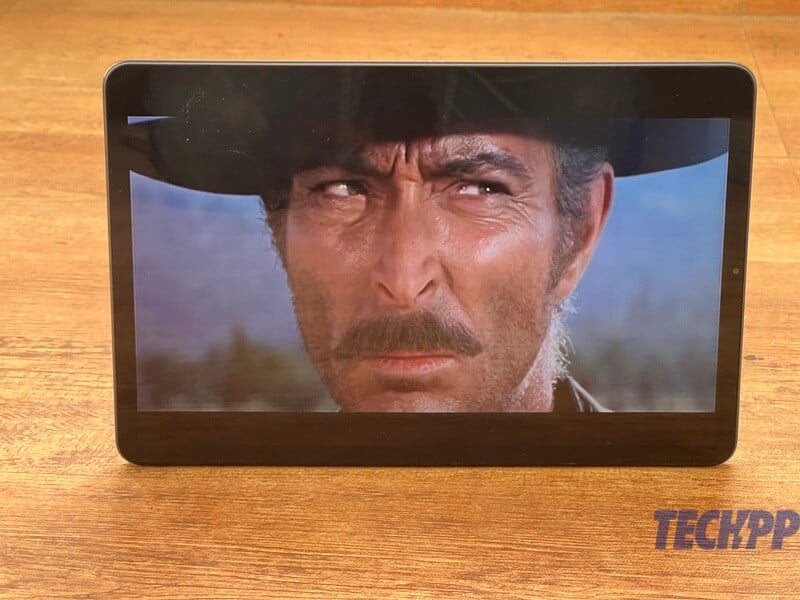 The slim, light figure comes with some very impressive hardware. The 10.9-inch LCD display is a 2.5K (2560 x 1600) one with a refresh rate of 120 Hz, which is well above anything at this price range. It is a bright and brilliant display, and its aspect ratio makes it great for watching videos and shows. It comes with HDR 10 and Dolby Vision support as well. Perhaps the biggest weapon in the tablet arsenal of the Xiaomi Pad 5 is the Qualcomm Snapdragon 860 processor. This is the same processor that we saw on the very impressive Poco X3 Pro last year and is easily one of the most potent chips we have seen on a tablet at this price. The speaker grilles on the top and base are not decorative – the tablet has four speakers in all and comes with support for Dolby Atmos. There is plenty of RAM and storage onboard as well – you get 6 GB/ 128 GB and 6 GB/ 256 GB variants. 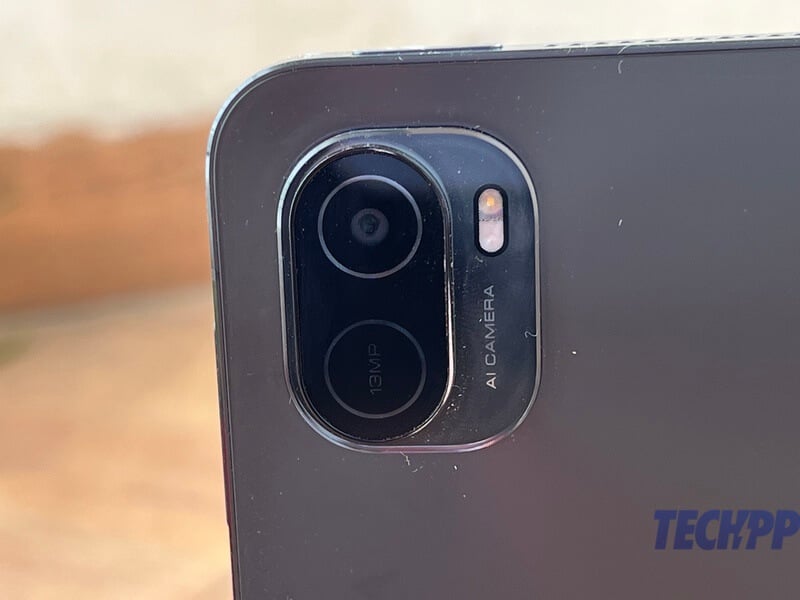 The rear camera is 13 megapixels and supports 4K video (if you are the type that shoots video on a tablet). The selfie camera, which we suspect will be used more for video calls than vanity snaps, is an 8-megapixel one. There is a big 8720 mAh battery to keep everything going for a while, and the tablet comes with a 22.5W charger in the box, although we are told it can support 33W charging. What’s more, Xiaomi has also released a keyboard cover and a Xiaomi Smart Pen stylus, clearly laying the foundations of what seems to be a tablet ecosystem of sorts. All of which is very impressive given the tablet’s price point. Yes, there is no expandable memory or audio jack, and some will be disappointed at the fact that the tablet has only a Wi-Fi variant and no 4G/5G version, but even then, this is a very impressive spec sheet. 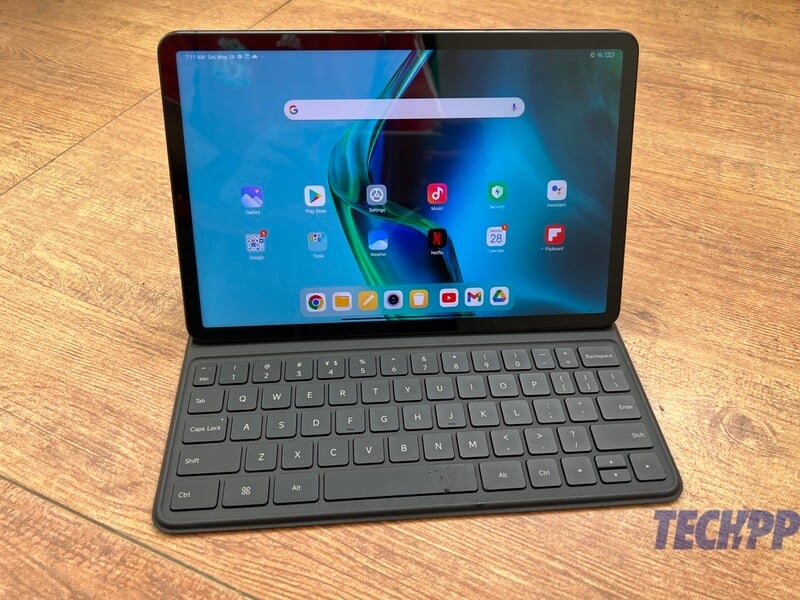 All of that hardware comes together to deliver a very good performance on the Xiaomi Pad 5. Xiaomi has tweaked its MIUI interface for tablets and developed what it calls MIUI PadOS 13. While the Xiaomi Pad 5 might not look much like the iPad, there is no doubt that the MIUI Pad OS is a dead ringer for iPad OS, with a very similar layout. There might be some screams of “copycat,” but honestly, it is an arrangement that works and is easy to use. We had no complaints with it, especially as it came with hardly any bloatware, although we would have preferred to see the UI on top of Android 12 rather than Android 11.

That high-resolution, bright and colorful display makes the Xiaomi Pad 5 an excellent device for browsing the Web, checking out social media, and even handling emails – the onscreen keyboard works very well when you put the tablet in landscape mode. However, the tablet really comes into its own when you get into the multimedia zone on it. That display, that processor, and those speakers all add up to a ‘multimedia monster,’ making it perhaps the best device under Rs 30,000 to watch shows and play games on. The aspect ratio is also more suited for viewing content as there is lesser ‘banding’ above and below videos as compared to the more square-shaped iPad. That Snapdragon 860 chip allows you to run almost any game at high settings, and those quad speakers deliver superb sound.

A productive tab too, but Android apps need work 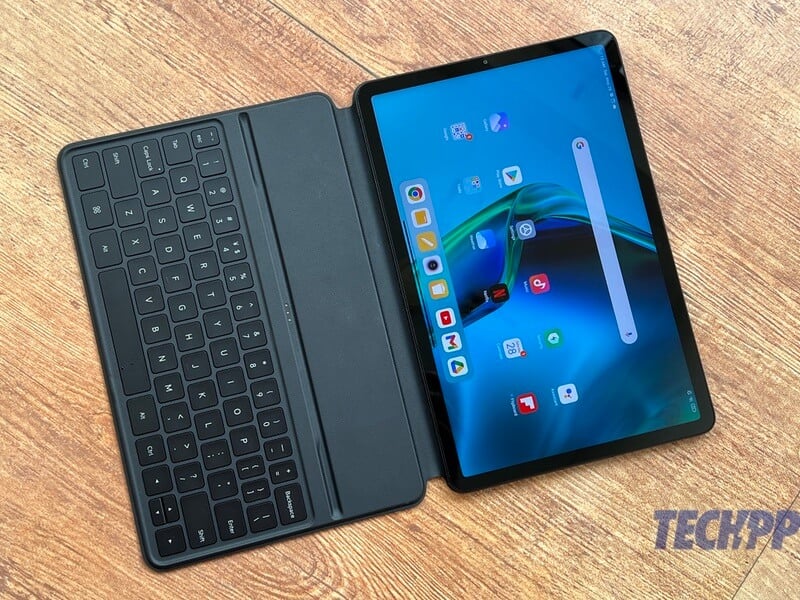 We got to use the Xiaomi Smart Pen (Rs 7,999) and the keyboard cover (price to be announced) with the tablet as well, and once again, the performance was very good indeed. Better than anything, this side of the iPad. The keyboard cover has a special connector to the tablet, so it does not need to be charged or paired. On the other hand, the stylus can be charged by attaching it to the magnetic charging point on the side of the tablet. Unfortunately, placing it on charge on the tablet makes the volume buttons just above the charging area a little difficult to use, but the stylus charges in a jiffy, so we did not think this was a major issue.

Both keyboard and stylus worked very smoothly on the tablet. The keyboard is not backlit and has no trackpad but it comes with reasonably spaced keys that have decent travel. It also supports most ‘normal’ shortcuts like alt+tab and ctrl+c/v. There is only one viewing angle, but the 16:10 aspect ratio of the display and its size give one serious notebook vibes while typing away. Do remember to keep the connection points clean, though. The stylus is good for scribbles and sketches and can also take screenshots, although there is no native handwriting recognition (like Scribble on the iPad) on the tablet. The Xiaomi Smart Pen is more substantially built than the S-Pen, though not as versatile and is not quite as premium as the Apple Pencil. Still, it is definitely an excellent option for those who want to use the tablet as a canvas or a notepad. 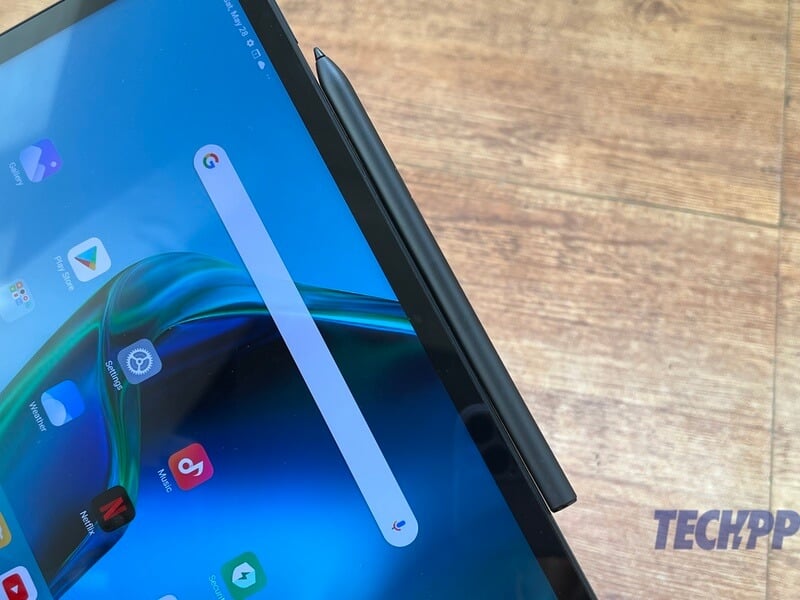 If there was a spanner in the works, it was the way in which Android apps tended to behave on the tablet. Android has never been too tablet-friendly, and while Xiaomi’s apps and most high-resolution games ran smoothly, even something as basic as Twitter looked stretched on that brilliant display. Similarly, Google Docs seemed to work better within the browser than as an app. The front camera is just about decent for video calls but not really a match for the iPad’s new extra-wide sensor. The rear camera is good enough for document scans and impromptu snaps and videos. We did miss a fingerprint sensor, especially when it came to unlocking the device or making app purchases.

Battery-wise, the tablet did very well indeed. It lasted for about ten hours on a single charge, and the 22.5W charger got it from zero to full in about two hours (that’s faster than the iPad). 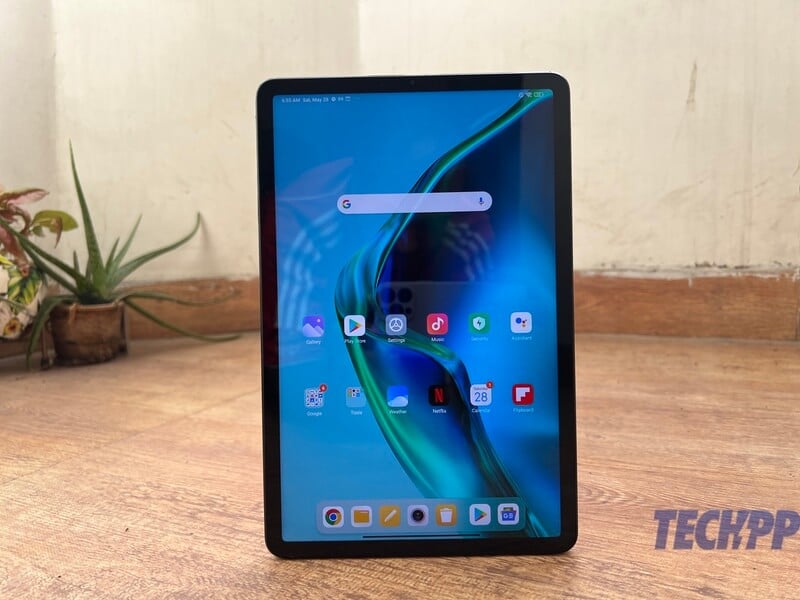 The answer to that in performance terms really depends on how you plan to use your tablet. If you are using it mainly for a lot of multimedia, the Xiaomi Pad 5 is a no-brainer. Bring apps into play, however, and Android’s issues with tablets trip up the Xiaomi tablet. Then there’s the matter of software and history. Apple’s iPad has been around for years, and even versions five years old are getting updated to the latest version of iPad OS. Xiaomi will have to prove that it can do the same for the Xiaomi Pad 5, starting by getting it to Android 12 as soon as possible. The iPad might finally have a worthy Android challenger.

Review Overview
Was this article helpful?
YesNo
TechPP is supported by our audience. We may earn affiliate commissions from buying links on this site.
Read Next
iQOO 11 5G Review: Does It End Your Quest for the Ultimate Smartphone?
#android tablet #ipad #review #Tablet #xiaomi #Xiaomi Pad 5