Apps that Drew me Back to Mobile Gaming

I remember the first thing I did when my father bought me a smartphone. Instead of using it for “study purposes” as I had promised, I went ahead and downloaded a number of games. Doodle Jump, Angry Birds amongst others. Fast forward to the end of 2016 and my phone didn’t have a single game on it except for the Android easter egg. 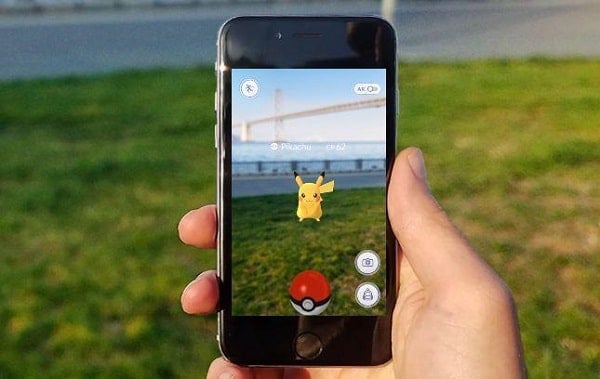 It wasn’t because I grew up or anything. The mobile gaming marketplace was just going through this saturated phase. The store was crowded with thousands of clones and spin-offs of existing ideas. Sure, there were titles like Pokemon Go but after a week, I got fed up and exhausted with all the hype. Perhaps, my laziness was a factor there as well.

A couple of months later, though, when Google altered its homepage to highlight indie apps across categories, I stumbled upon a few games that struck the right cord with what sort of titles I like playing on my phone — they should be simple, portrait orientation is a plus, and most importantly, don’t require lengthy sessions for figuring it out. Hence, in this article, we will talk about a couple of those games. 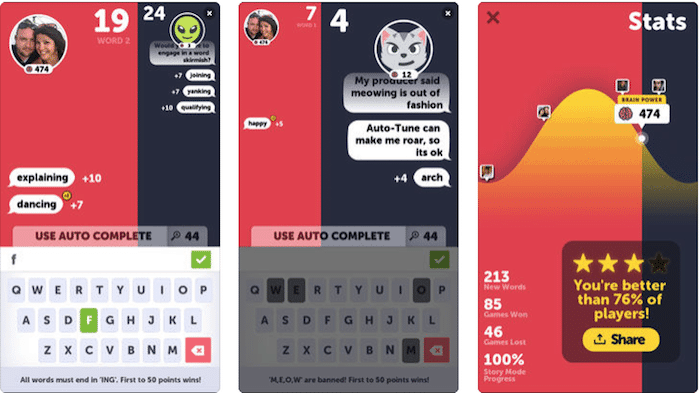 BattleText is a free word game that challenges you to defeat long-standing opponents in a war of words. Your job is to come up with words which will win you the most points. But that’s not it. Each level comes with its own set of rules your inputs must comply with. For instance, it should be an ‘S’ or end with an ‘E’ and there’s, of course, a time constraint. BattleText may sound intimidating at first glance, however, I found it to be quite fun. It’s also entirely free of cost and you can download it from the link down below.

If you thought endless arcade games died with the demise of physical keyboards on phones, I present to you Twisty Board 2.

Twisty Board 2 is set in a jaunty wonderland where you have to fight off missile launchers, robots, archers and whatnot while surfing around on a guitar. In the midst of all of this, you’re also supposed to free prisoners. In spite of the presence of these myriad elements, Twisty Board 2 is a rather straightforward game to master. For starters, you’re only supposed to direct the character, everything else happens on its own. The game is equally compelling and a joy to stare at thanks to its vivacious aesthetic.

Twisty Board 2 on iOS App Store

Twisty Board 2 on Google Play Store

The Battle of Polytopia

The Battle of Polytopia is for the Age of Empires fans who no longer have the time and patience to run a virtual kingdom. The developers have pared down the original idea to a smartphone level. This essentially means the game still revolves around the concept of building up cities, upgrading armies, conquering enemies but sans the more complicated aspects. For instance, there’s only a single currency you need to worry about instead of dealing with gold, food separately. It’s certainly worth trying out and the best part is that it’s free.

The Battle of Polytopia on iOS App Store

The Battle of Polytopia on Google Play Store

This is not Ping Pong 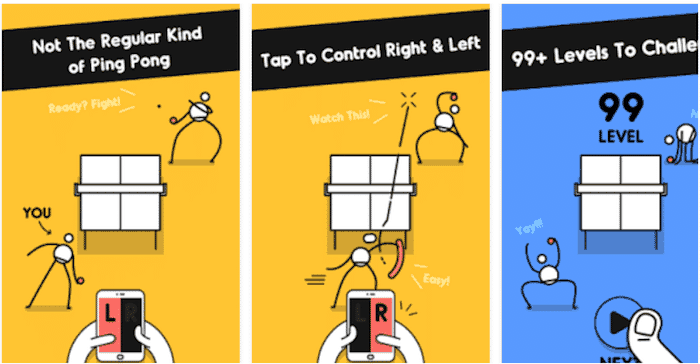 If you assumed playing table tennis couldn’t get any simpler, let me introduce you to a game called “This is not Ping Pong”.

The game takes the best part out of the sport i.e. hitting the ball as hard as possible on the table and hands you the control in the most challenging, yet effortless way. All you need to do is tap either the left or right side of the screen and try to beat the adorable stickman-like opponents. I should warn you, though, that it can become exceedingly addictive after a few levels, hence install with caution. Unfortunately, it’s limited to Android for now.

This is not Ping Pong on Google Play Store

For our readers who are still not familiar with Monument Valley, I feel sorry for you. Really.

Monument Valley is the epitome of how developers are now trying to propel their games through experience and design. The game revolves around a princess whom you have to escort through various puzzles set in a breathtakingly stunning world. Another critical factor in its success is the soothing background score. Although I bought Monument Valley more than a year ago. Since then, the developers have introduced a sequel. Therefore, if you still haven’t tried it, I would suggest you do now. Both of them are a bit on the expensive side of the spectrum, but I can assure you it’ll be worth the cost.

Lastly, the game I’ve spent hours on — Flippy Knife. As the name suggests, your goal in Flippy Knife is to flip knives around in the air and hope they land on the right end. The game can be frustrating to figure out at the beginning but once you’re past that phase, it will be incredibly hard to put down. It also doesn’t become boring after a while thanks to the bunch of different modes developers have bundled. Flippy Knife is a free app as well.

So these are the games which have drawn me back to mobile gaming. Let us know in the comments section if you have a better one for others to check out.

Netflix Mobile Games: Best Games and How to Get Them on…
The Redmi Note 11 series arrives in India... but has it put…
AirPods Pro Review: Insanely Great but not Insanely Simple
OnePlus 8 and iPhone SE: An upside down smartphone world?
Indian Smartphone Market Slowed Down by COVID Crisis in Q1…
Realme 5 Review: Trying to put Mi in the Red?