Alongside its next flagship, OnePlus is today also introducing its first wireless pair of earphones — the Bullets Wireless. The new Bluetooth in-ear headset features a neckbud design which wraps around your neck. The OnePlus Bullets Wireless sport magnetic buds which enable automatic resume or play whenever you snap them together or pull them apart. 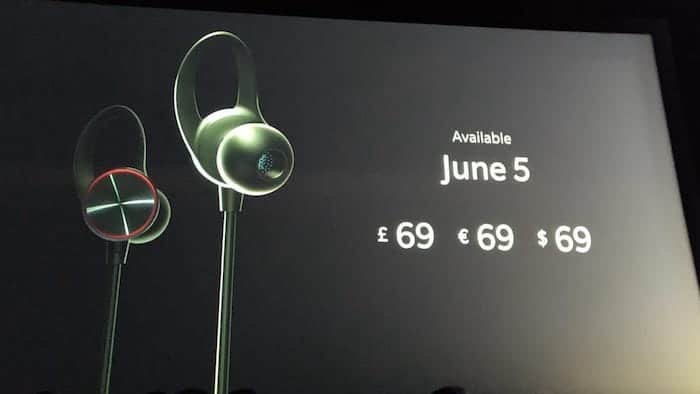 In addition to that, the Bullets Wireless are water and sweat resistant so that you can jog out in the rain with them. They’re also compatible with quick charging and can be topped for 5 hours of use within ten minutes. On a single charge, the Bullets Wireless can last up to eight hours. The best part of that is you can connect them to any USB Type-C cable, not just the bundled one. OnePlus says they come with Google Assistant built-in but this isn’t a “Made by Google” device, hence you’ll only get the standard integration.

As far as audio is concerned, the Bullets Wireless support the AptX codec and come something called an energy tube which essentially reduces distortion in the output. The OnePlus Bullets Wireless will be available starting from next month’s 5th for a price of 69 euros, 69 pounds, and 69 dollars (~Rs 4,600). The company didn’t announce whether they will be arriving in India anytime soon but considering their position in the market here, there’s a good chance they won’t take long. Perhaps, we will hear more about them during the OnePlus 6’s India launch which happens tomorrow.

Was this article helpful?
YesNo
TechPP is supported by our audience. We may earn affiliate commissions from buying links on this site.
Read Next
OnePlus Nord Watch vs Amazfit GTS 2 Mini New Version: Which One Should You Buy?
#oneplus #OnePlus Bullet Wireless