Qualcomm has now unveiled its new Always Connected PC (ACPC) chip at the Computex 2018. It’s a sequential update over the Snapdragon 835 based ACPC chip that was unveiled earlier this year. The American chipmaker is calling its new silicon aimed at powering Windows 10 convertibles and 2-in-1s as the Qualcomm Snapdragon 850. 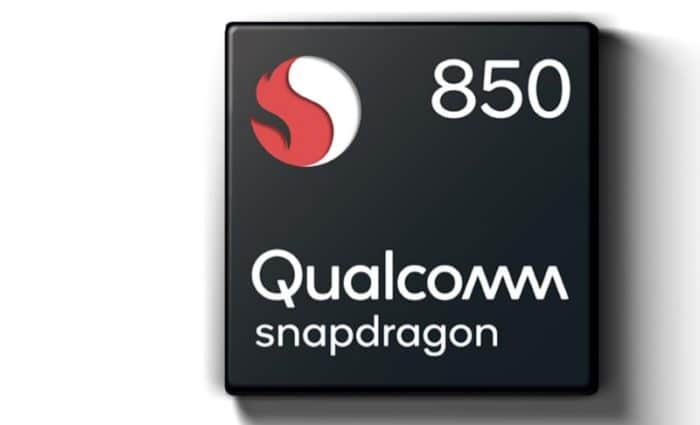 The Qualcomm Snapdragon 850 ACPC aims to solve one of the major pain points of traditional x86 powered systems, well, the battery life. Most of the modern day laptops and ultrabook fail to deliver an impressive battery performance, with a majority of devices dying within 4-5 hours of constant usage. Qualcomm aims to raise this bar, as its new Snapdragon 850 platform will offer up to 25 hours of battery life on a single charge.

The new ARM-based processor built especially for powering Windows 10 system is not only power efficient but comes with impeccable network connectivity. Qualcomm has always been a leader in terms of mobile connectivity, and now they want to bring in their expertise in the PC space. The new Snapdragon 850 comes with an X20 LTE modem which in turn makes Gigabit LTE possible with over 90 percent operators around the globe. It’s a significant update over the Snapdragon X16 LTE modem found in its predecessor. The Cat 18 connection on the new ARM-based PC chip will enable you to download a 50MB file in just under 10 seconds.

Internally the Qualcomm Snapdragon 850 ACPC isn’t much different from its mobile predecessor the Snapdragon 845. The latter powers most of the flagship smartphones of 2018, including the likes of OnePlus 6, Samsung Galaxy S9, LG G7 ThinQ and more.

To demarcate the ARM-based Windows 10 chip from the mobile segment, Qualcomm decided to go with the Snapdragon 850 name. The only major difference in the new ACPC is in the clock speed of the cores. The all-new chip comes with a 4 x Kryo 385 Gold cores clocked at 2.95GHz, which is a step up from the 2.6GHz Kyro 280 cores in the SD835. Qualcomm claims that this results in a 30 percent improvement in performance over the Snapdragon 835 ACPC based Windows 10 convertibles launched earlier.

Qualcomm’s main push with the Snapdragon 850 is the growth of artificial intelligence. Currently, Microsoft’s Cortana is accelerated using the Hexagon DSP of the Snapdragon 850, and sooner or later we can expect more AI based assistant to come with hardware-based acceleration. The American chip manufacturer has also revealed that Microsoft’s Edge browser will also be re-optimized for the new platform. Apart from these Qualcomm is releasing a 4bit Win32 SDK to enable developers to build native ARM64 applications.

Just like last year, we can expect a number of PC manufacturers like HP, Acer, Dell come forward to launch their own take on ARM-powered Windows 10 system. The first lot of Qualcomm Snapdragon 850 ACPC powered Windows 10 convertibles are expected to hit the market later in 2018.

Sony WF-1000XM3 with up to 32 hours of Battery Life Launched…
Nothing ear (1) With ANC and Upto 34 Hours Battery Life…
OnePlus Buds with 7-hours music playback announced
Asus expands its notebook portfolio with the launch of new…
Asus Zenbook 14 OLED Review: The MacBook of Windows Laptops?
Smartphone Batteries: Are mAh and charging speeds the new…