There is a smart speaker party going on in the tech world, and some of the major brands are already there. While Amazon may seem like a veteran in the game with its Echo range of smart speakers, Google has recently stepped in as well. The search giant recently launched Google Home with Google voice assistant in the Indian market at Rs. 4,999. 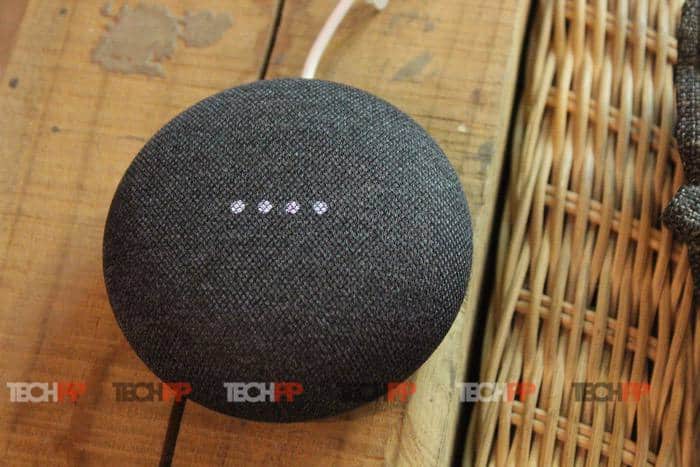 A doughnut that can speak

When you first look at it, the Google Home Mini does not look like a gadget at all. The doughnut sized device looks more like a stylish paperweight than a smart speaker, which we think is a big plus because the Home Mini will just blend in easily with your home decor without making it look like a gadget store.

The first one is the mesh-like cloth which dominates the speaker by covering more than the upper half of the device. This mesh-like cloth segment is also the front of the speaker whereon lie the four LED light indicators in a line. The light indicators light up in red, blue, green and yellow colors (the Google colors). These indicators light up when the speaker turns on or when it gets a command. There are also touch-enabled volume controls on the extreme left and right side of the light indicator row. The volume controls are super sensitive and can operate with a slight brush of the fingers. While the cloth covering the speaker looks sturdy, we noticed a few cracks appearing in the cloth during our review period. 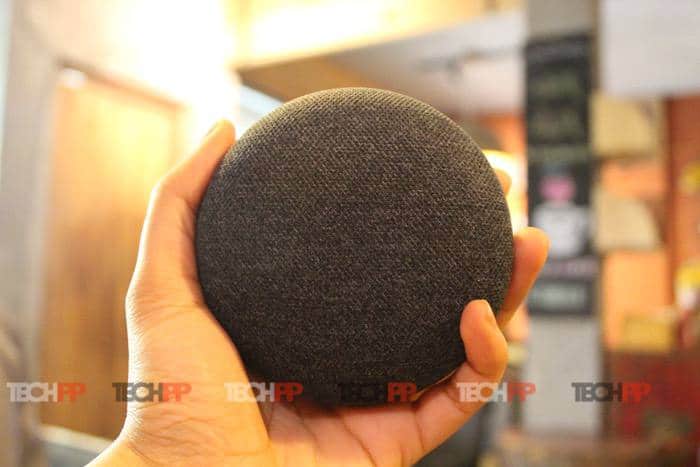 The second tier is the plastic one. This mid segment comes with physical mute/unmute toggle for voice detection with a hint of orange on the inside. Along with the toggle, there is also a micro USB port which powers the speaker. Last but not the least is the third segment which is the orange silicon base of the Google Home Mini. The base of the Home Mini has some information and warning about the device around the circumference and comes with the company’s logo in the center.

The Google Home Mini is pretty compact and can easily fit the palm of your hand. It has a 98 mm diameter and is 42 mm high. The smart speaker is also not too heavy and weighs 173 grams – that is lighter than some of the smartphones out there.

Loud and clear, with the power of Search 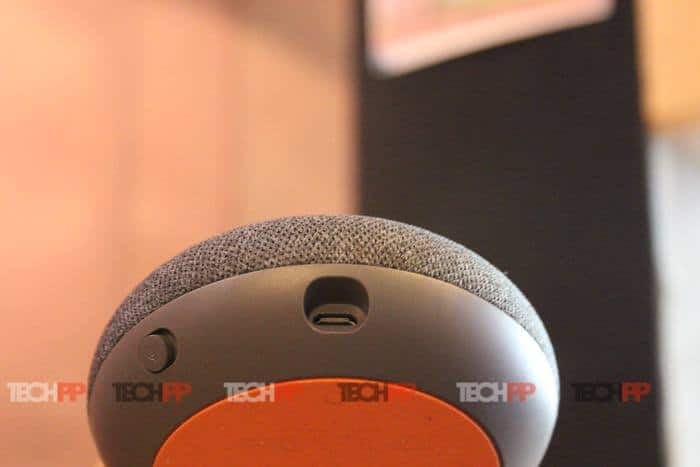 In the performance department, the Google Home Mini can do everything its bigger siblings in size can do. The only difference? The size of the speaker. The device, which feeds on your Wi-Fi connection can complete all your voice assistant oriented tasks. All you have to do is say the magic wake words, “Okay, Google” or “Hey, Google”, to wake the device up and shoot your command right at it. The Home Mini is quick to catch commands, the microphones on the smart speaker are fairly sensitive, and although it is a super compact device, the speaker can easily wake up to your commands from across the room. And the answers are loud enough to be heard from across the room – of course; you would always need to be connected to the Internet.

The audio quality of the Home Mini is great for its size. Yes, it is not as loud as it is siblings that are bigger in size as compared to the Home Mini but the device produces a sound that is loud and clear. Audiophiles may complain about the speaker not having bass or treble, but at the price, the Home Mini is definitely the loudest smart speaker available, beating Amazon’s Echo Dot quite comfortably in the audio department. It is loud enough for a small room. And what’s more, it can actually be charged off a portable charger, which makes it somewhat portable – it is light enough to be slipped into any bag.

Google is the God of search engines, and this definitely works in favor of the Google Home Mini as the Google Assistant comes as a treasure chest that is packed with all the answers to your questions (well, mostly). You can ask the Home Mini about the weather, about math equations, about geography amongst a million other things and whatever there is on Google Search will definitely be served to you.

Stream some music…and it sounds good

With the Google Home Mini you not only get the brains of Google search but also can stream music by connecting to music streaming services like Saavn or Gaana (for which you would have to link your Saavn or Gaana account with the device), it can read your daily news, help you find places nearby amongst other things. 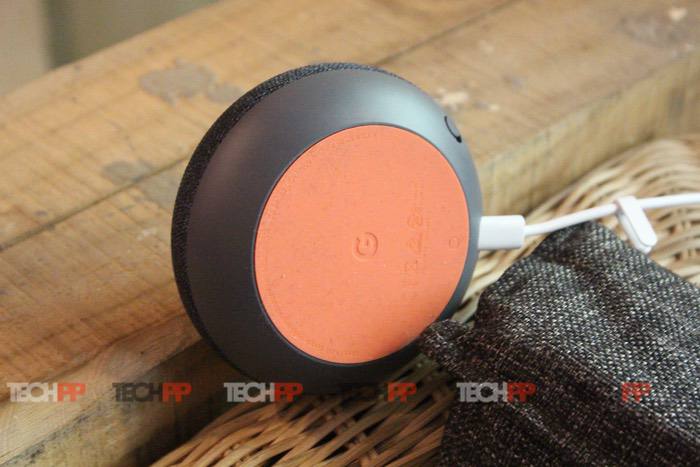 One can also stream content from Netflix and YouTube with the Google Home Mini, but you would need Google Chromecast to access those services. The device is also compatible with various smart home services like Philips Hue, TP-Link, IFTTT. The device comes with various language options. Unfortunately, Hindi is not one of them, instead, the smart speaker has compatibility for Indian English which is pretty much basic English with a weird accent.

But while the Home Mini has been mostly good to us, we have had our issues with the smart speaker. To begin with,we think we have been spoilt by Amazon Alexa as the voice assistant only requires for you to call her name as the wake word but here you either have to “Okay, Google” or “Hey, Google” to wake the device up which does not come to you as naturally as just calling out someone’s name would. 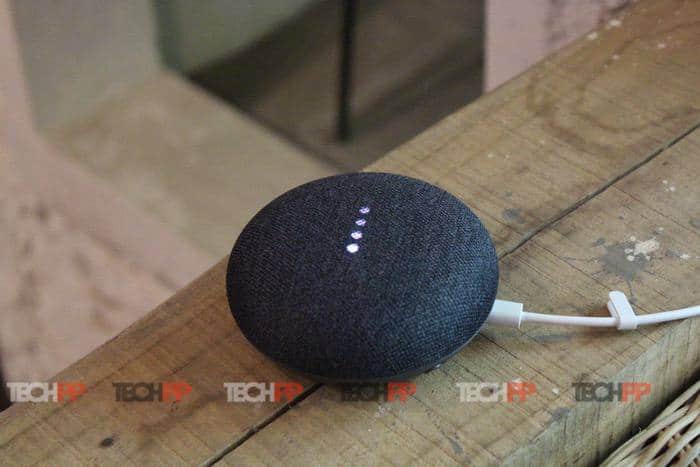 While the problem mentioned above can vary from user to user, the fact that the Home Mini sometimes plays covers or different versions of songs instead of playing the original version can be a little annoying. The device can also get a little confused at times. For instance, we tried playing music on the Google Home Mini and when we asked the device to play the next song, it paused, did not wake up until we said “Hey, Google” again, and after waking up continued to play the same song. This is a problem that we did not face while using the Amazon Echo Dot.

Taking on the Dot! 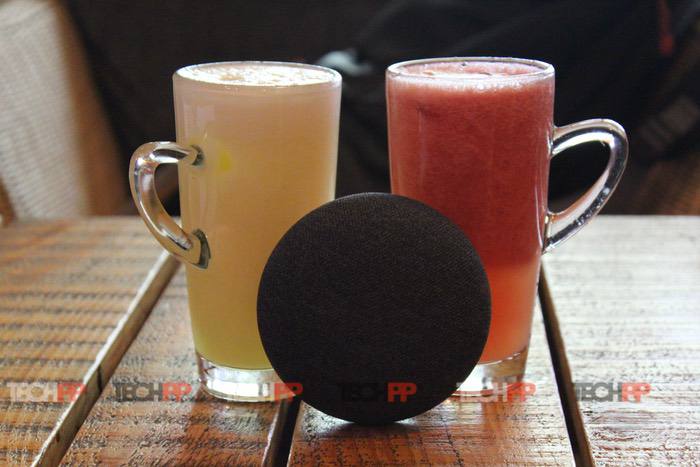 Priced at Rs. 4,099, the Google Home Mini is one of best entertainment level smart speakers available in the country. The device scores in the audio and the information departments and apart from a few eccentricities works just fine in others as well. If you wanted to try the smart speakers and do not want to burn a hole in your pocket, this could be your entry to the party. Its main competitor, of course, would be the Amazon Echo Dot which is also priced at Rs 4099 but does not have quite the same audio quality, and the sea of information that Google has on its Search-powered fingertips. That said, we think Alexa is easier to get used to and seems to be just a little faster. It is a close finish between the two devices – if you are closer to the Amazon ecosystem, then perhaps the Echo Dot might appeal, but if you are a Google person and value audio quality and design (it does look better than the Echo Dot), then the Google Home Mini is the one to go for.

Was this article helpful?
YesNo
TechPP is supported by our audience. We may earn affiliate commissions from buying links on this site.
Read Next
How to Split Screen on Chromebook [3 Easy Ways]
#Amazon Echo Dot #google #Google home mini #review