Ride-hailing service, Uber is doubling down in its only remaining market in Asia — India. The company has introduced a new, stripped-down version of its app for Android users which weighs merely 5MB (compared to the regular Uber app’s 181.4MB) and will be soon capable of summoning cabs without an Internet connection. 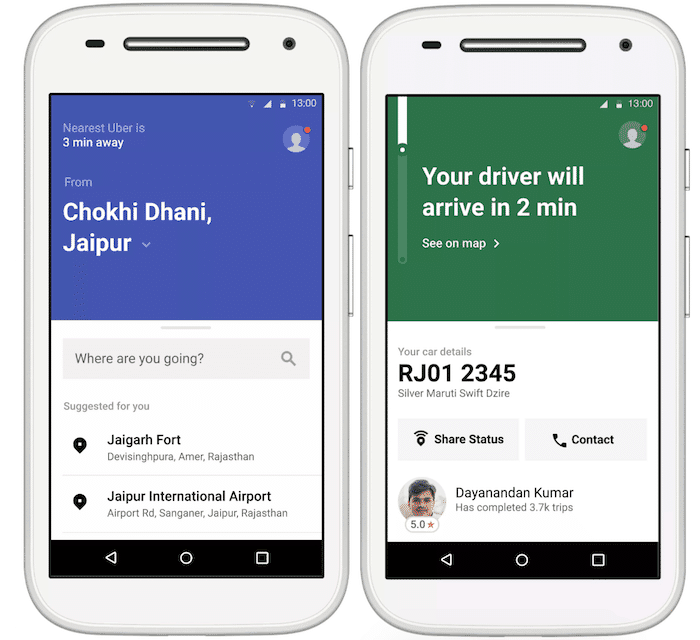 The most significant way Uber is making its new app smoother on patchy networks and underpowered phones is by getting rid of the nifty map which shows the driver’s location in real-time. Instead, Uber Lite displays your pickup whereabouts’ name in big, bold letters on the home screen and the car as well as driver’s details once you’ve confirmed. Maps are present on Uber Lite if a user wants but they’re optional and can be revealed by tapping the “See on map” option.

More importantly, Uber Lite, in a forthcoming update, will also allow riders to request cabs without an Internet connection. The app will do so by caching the top locations and employing the device’s GPS to determine the location. The option to switch languages will arrive in a later release as well.

The good news is that Uber has managed to retain essential features such as in-app support and even the trip sharing options. Uber Lite will be, for starters, available in three cities — Hyderabad, Delhi, and Jaipur but the company says it’s planning to expand soon to other cities and emerging countries too. You can sign up for an early access here. We’ll update the post once it has arrived on the Play Store for download.

Incidentally, Ola, which is still the country’s dominant ride-hailing service, had introduced a Lite app as well a few months ago. Although unlike Uber Lite which measures 5MB, Ola managed to bring down the size down to just an MB which is quite commendable.

Uber has been aggressively investing a lot in its Pool services too as of late. The company’s new CEO, Dara Khosrowshahi, recently at the Code Conference outlined several ways the company plans to make the experience better and even more affordable. One of those included setting up common pickup points across cities which would dramatically reduce the time and allow the drivers to complete more trips.

Uber seems to be determined to push forward in the Indian market after selling off its business in other Asian regions to Grab and Didi. A report, back in March, also suggested that Uber might be looking to sell its stake in India to Ola.

Was this article helpful?
YesNo
TechPP is supported by our audience. We may earn affiliate commissions from buying links on this site.
Read Next
Uber: Message from the next rider – Betting on confidence, not panic
#Uber