Samsung’s latest flagship in its Note series, the Note 9 is out and we thought you might want to know what’s new compared to last year’s Note 8. We’ve also compared it with year’s ‘S’ series flagship, the S9+, so make sure you check that out as well. So let’s take a look at some notable (pun intended) changes. 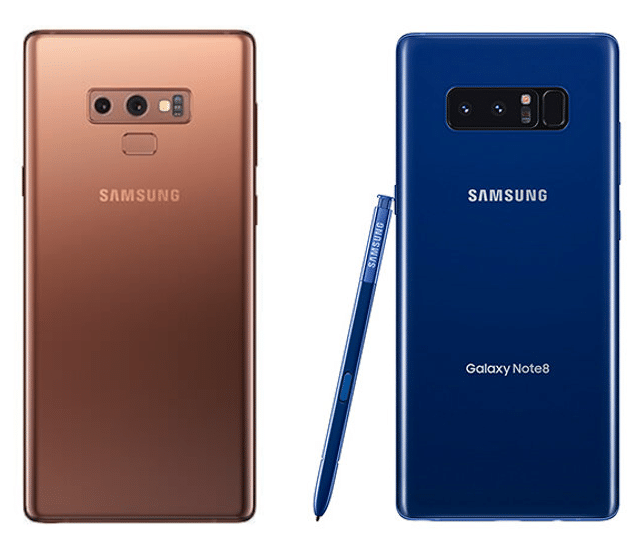 For starters, the Galaxy Note 9 comes with a 6.4-inch QHD+ Super AMOLED display with a resolution of 1440 x 2960 pixels and an aspect ratio of 18.5:9. When compared to the last-gen Galaxy Note 8, the display on the Note 9 is now 0.1-inches bigger while the resolution stays the same. The form factor, however, is more or less similar.

One of the major differences between the two phones comes in terms of the SoC under the hood. The Galaxy Note 8 came with Samsung’s then flagship processor, the Exynos 8895 on global variants, while the US variant was fitted with Qualcomm’s Snapdragon 835 chipset. The Note 9, being an obvious upgrade to the Note 8, sports Samsung’s current-gen flagship SoC, the Exynos 9810 found on the Galaxy S9+ on global variants, while the US variant sports the Qualcomm Snapdragon 845 chipset. Technically, the Snapdragon 845 is faster and better optimized, but 835 is no slouch either.

While the Note 8 topped out at 256GB as maximum storage, the Note 9 takes it a step further and doubles it up to 512GB with up to 8GB of RAM as opposed to 6GB on the Note 8. The minimum storage as well has been upgraded from 64GB to 128GB. Now, that’s a significant step forward for premium flagships.

The camera department sees an upgrade as well with dual 12MP cameras with a variable aperture on the Note 9 similar to the ones found on the S9+, with some intelligence built in like detection of closed eyes while taking a picture. The Note 8 had dual cameras as well but had a fixed f/1.7 aperture. So yeah, cameras are a definite step up as well.

The battery on the Note 9 is a huge leap from 3300mAh on the Note 8, to 4000mAh. This will surely help you get through an entire day and still be left with some juice to go into the next one. Of course, there are dual stereo speakers from the S9+ as well. There’s also a liquid cooling system as well in place, which was missing on the Note 8.

The highlight of the Note series is the glorified S-Pen which has now received an upgrade as well. Apart from the ability to take notes, the S-pen can now connect to your phone through Bluetooth and perform multiple functions like a remote shutter for your camera, play or pause music/videos, change presentation slides, etc. Also, Samsung’s Dex which provides a PC-like experience can now be used without the dock unlike the Note 8, and just requires an HDMI adapter.

While the Note 9 might seem like an iterative upgrade to the Note 8, there are some notable changes like a beefier processor, better cameras, much bigger battery and of course, a new S-pen with a feature overhaul. Of course, as with every upgrade, there’s a bigger price as well. Is it worth it though? If you’re a big fan of the Note line-up, you can probably justify the higher price. Have a Note 8 on you already? You might want to hang on for the next upgrade to see if there’s a new design overhaul, especially with Samsung’s foldable phone on the cards.