Google, last week, began rolling out the ninth major update for its mobile operating system — Android Pie to a handful of compatible phones. And while on the surface itself Android 9 is quite a significant build with a flurry of changes, we found a bunch of other little handy features which might not be visible to the naked eye. Here are ten of them. 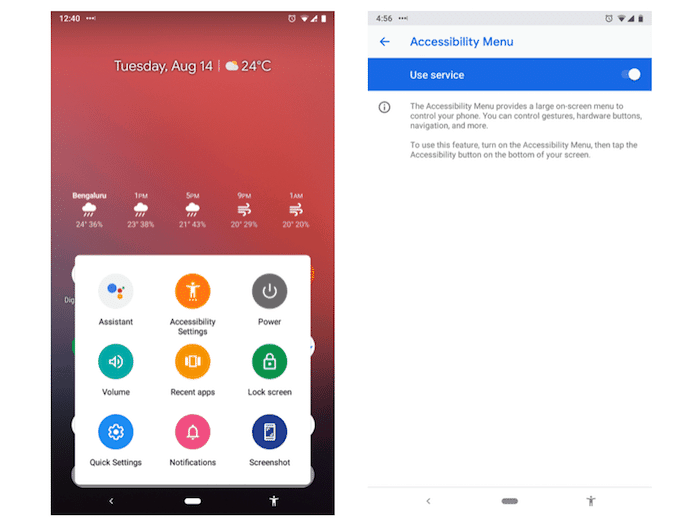 Android Pie lets you pin a handy little accessibility menu to the navigation bar which can be employed for quickly accessing a bunch of options. This includes “Notifications” which allows you to pull the notification shade without stretching your finger to the top, “Recent Apps”, “Screenshot”, and more. The option to enable it is situated inside the “Accessibility” setting as “Accessibility Menu”. Although I wish Google lets us edit the menu in the next update. Here’s to Android 10 or 9.1? 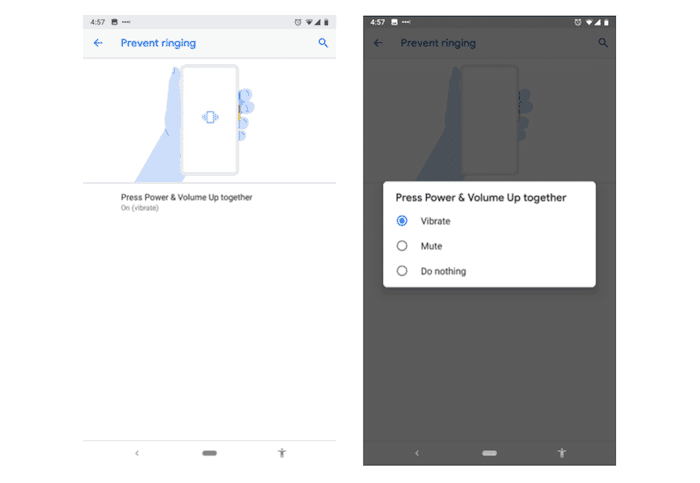 Android Pie also comes with a new gesture that allows you to put the phone in vibrate or mute mode by simply pressing the power and volume up together. It’s located under the Gestures setting inside the System menu.

On Android 9, you’ll come across a series of contextually aware features. One of them is a button which pops up on the navigation bar whenever the auto-rotation is locked and you turn your phone in the landscape position. So, for instance, if you’ve disabled auto-rotation and you try to watch a video, you can simply tap the new button instead of enabling pulling down the notification shade and turning on auto-rotation.

Google somehow made the notification experience even better on Android P by bringing in more ways to monitor and mute them. A big part of that is the software will now ask if you’d like to block a particular type of alert if you have dismissed it too many times. Whenever it detects such a scenario, you will have an option to ban a notification channel when you’re about to clear it. 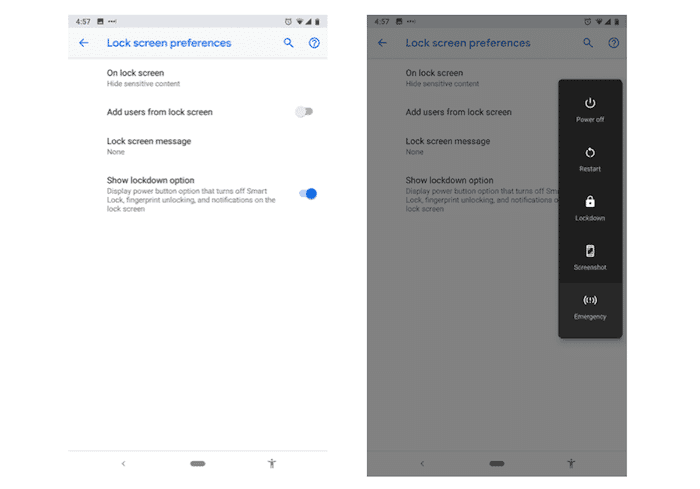 Android Pie also adds a new security tool called Lockdown to the power menu. What this does is essentially prevents anyone forcefully unlocking your phone. How? By blocking notifications from appearing on the lock screen and letting someone in only by entering the PIN or pattern, not Smart Lock or through the fingerprint sensor. The lockdown option is off by default. To activate it, head into “Security & location”, and then “Lock screen preferences”.

If you use multiple Bluetooth speakers or headsets every day, Android Pie can remember the volume levels for all of them individually. So, for instance, listening to music at a high volume on headphones won’t lead to a moment of shock when you get in your car and play something. 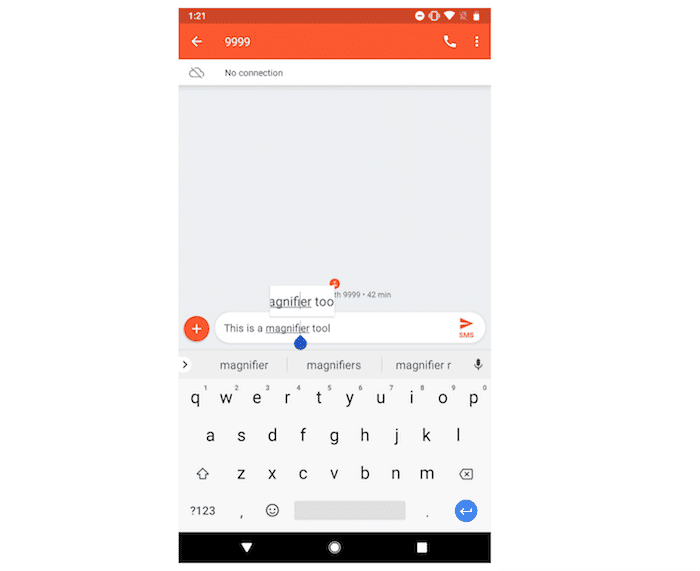 Editing text is a lot less frustrating on Android Pie as Google has brought the nifty magnifier tool from iOS. Whenever you slide across a piece of text for editing, it will automatically enlarge the portion wherever your cursor’s at in a floating window.

Copy Text in the Recents Menu 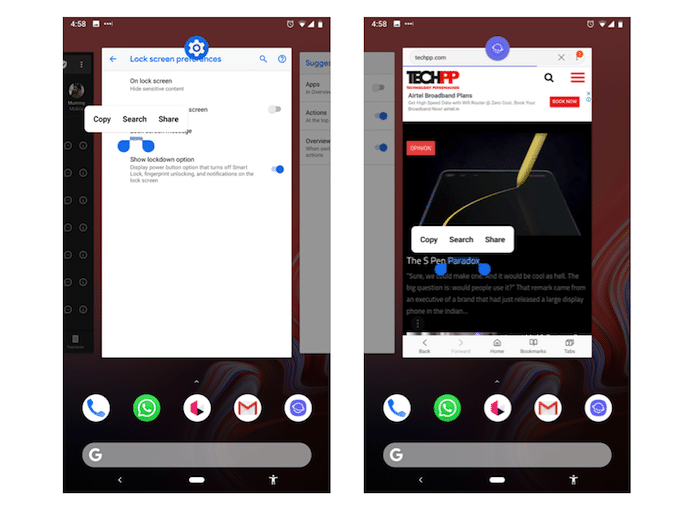 Another intriguing feature Android Pie comes with the ability to copy text straight from the recents menu. When you’re in the multitasking view, you can simply long-press on some text to perform actions like copy on it. The feature doesn’t require you to launch the app and functions with any sort of text, even the one that isn’t actionable inside the app. For instance, you cannot copy an option’s name in the settings but if you’re doing the same from the recents, it works.

Moreover, you can specifically tell Android when would you like the Battery Saver mode to kick in. In the Battery Saver settings, there’s a new slider which allows you to set up the threshold number for the mode. 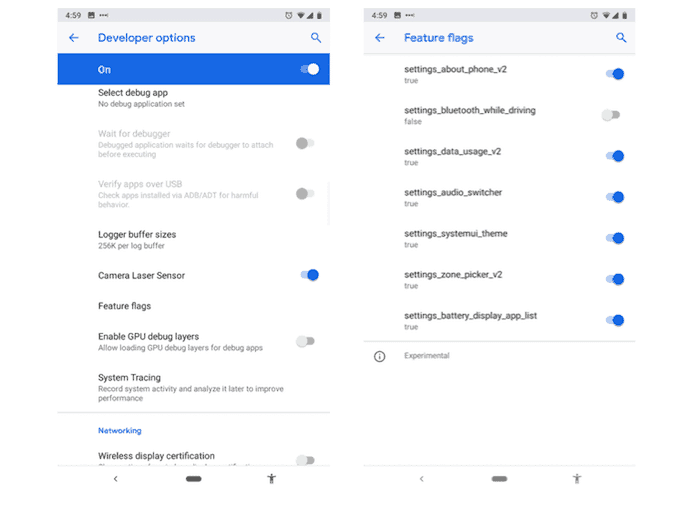 The Pie update is the first time Google has brought a set of experimental flags to Android, similar to what we have in Chrome. The flags, however, are not directly accessible. They are present in the developer options which can be enabled by tapping the build number in the “About phone” page a couple of times. Once that’s done, go to Developer options and scroll down until you encounter “Feature flags”. There are not a whole lot of radical beta features available right now. The most interesting one among them all is perhaps “settings_bluetooth_while_driving” which automatically switches on Bluetooth whenever the phone realizes you’re in a car.

Steps Involved in Serving the Latest Android Update to Your Smartphones [Info...
Read Next