Google today, as part of its Next Billion Users program, introduced a new initiative called Project Navlekha. With Navlekha, the search engine giant hopes to bring publications which work in regional languages such as Hindi online. The biggest hurdle such magazines and newspapers face is the cumbersome process of turning their content web-friendly. Project Navlekha solves that with a straightforward app for phones and the web where publishers can simply input scanned copies of pages and articles and quickly create a webpage out of them. 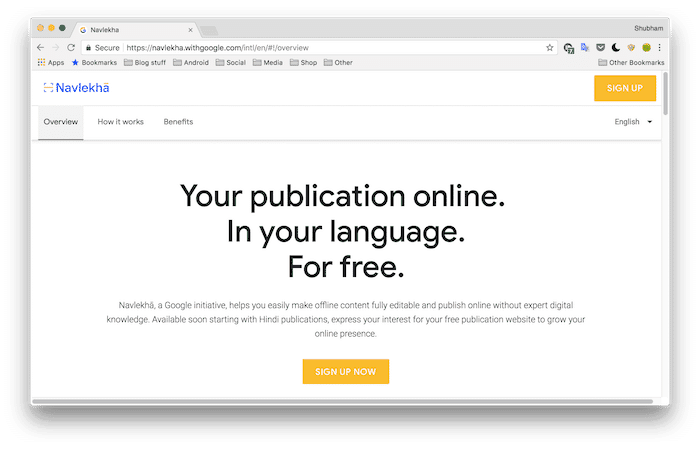 The essence of the application lies in a machine learning algorithm which recognizes various paragraphs and images and lets users drag and down those sections to a document editor. Once the scanned article has been set up in the editor, one can just press the publish button and have it go online in a matter of seconds. In addition, Google says Navlekha can function offline and users can upload the content whenever they have a connection.

Project Navlekha is also entirely free of cost since Google’s ultimate goal is to generate more ad revenue. The apps directly integrate with Google’s ad platform, AdSense and even offers professional support without any additional fee. Google is already working with a handful of publications and will be soon making the platform available for everyone starting with the Hindi language.

At the fourth Google for India conference, the company also announced a bunch of updates for its services designed for Indian users. For starters, Google Assistant will be soon accessible in a couple of other local languages such as Marathi. Moreover, users can now converse with a Google Home device in Hindi and seamlessly switch between multiple languages. Starting today, the Google Go app can read aloud web pages in several dialects similar to what the company introduced with Android 9 Go.

You can register for Project Navlekha here.

Was this article helpful?
YesNo
TechPP is supported by our audience. We may earn affiliate commissions from buying links on this site.
Read Next
How to Fix Google Chrome Translate Not Working
#google #Project Navlekha