Felix Arvid Ulf Kjellberg, also known as Pewdiepie’s five-year-old throne for the most subscribed YouTube channel could be in trouble. The Swedish video game commentator has been at the top of the Google-owned streaming platform’s charts for half a decade but that streak might be soon put to an end. However, its new challenger is neither an Internet personality nor a celebrity. 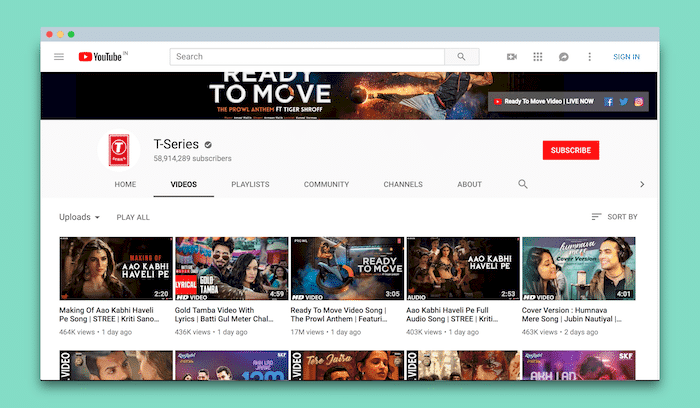 It is T-Series, an Indian entertainment conglomerate primarily known for its music production business. The channel, at the time of writing this post, stands at 58 million and trails the leader by about 8 million. While that number may seem a tad high to overcome anytime soon, T-Series is forecasted to surpass Pewdiepie in just two months. In spite of what you may think, though, T-series’ astonishing growth isn’t entirely driven by consistent content, there is a flurry of factors at play here. 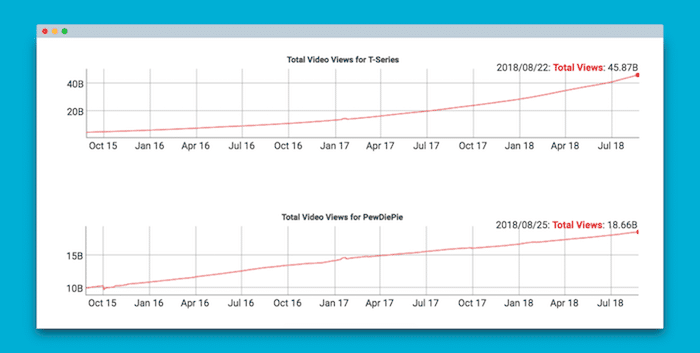 Before we delve into those, here’s some math for you to understand how dramatical the rise of T-Series is. As per Socialblade, a firm which tracks YouTube channels, T-Series has so far accumulated 46 billion views compared to a measly 18 billion by Pewdiepie which is well below even the half of the former.

In addition, at nearly 1,25,000 users per day, T-Series’ subscriber count is soaring five times more rapidly than that of Pewdiepie’s 25,000. Simple mathematics suggest T-Series would be at the top in no time and with such proliferating figures, it will stay there for a while before someone gets even close to quelling it.

So how did T-Series, a channel which was not even in the top-ten list a year ago, reach this stage and that too so expeditiously?

T-Series’ own metrics aside, the first and foremost factor in Pewdiepie’s imminent downfall is Pewdiepie himself. The channel has failed to sustain its early days of glory when its numbers were flourishing with tens of thousands of subscribers regularly. Instead of focusing on what he’s known for, Felix had stirred up a multitude of controversies and turned to desperate measures like promising to delete his channel once it hits the 50 million mark.

Pewdiepie’s subscriber growth has literally stayed the same (~25,000 daily) for three years. Between October 2015 and present day, Pewdiepie gained only 20 million new watchers. T-Series, on the other hand, barely existed three years back meaning it got roughly 50 million subscribers in the same period. It’s safe to say, thus, Pewdiepie essentially couldn’t produce videos which would allow him to extend its reach outside of gamers and youngsters.

One of the key drivers of T-Series’ rise, considering the timeline, is the 4G boom in India. The Reliance Jio wildfire brought millions of Indians to the Internet with bandwidth capable of streaming videos and movies at practically the cost of peanuts. This was, of course, followed by other telecom operators retaliating and slashing their own prices spawning a country-wide digital revolution. With an exclusive hold over the majority of popular soundtracks on YouTube, T-Series capitalized on the trend and possibly executed a revamped strategy for its online presence. 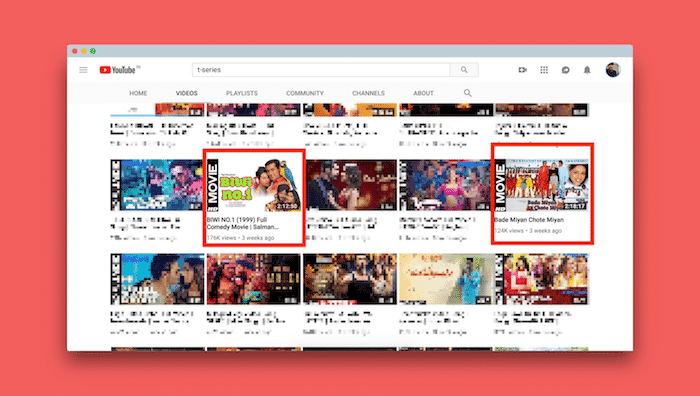 Since then, T-Series has been consistently publishing 30-40 videos each week which is undoubtedly amongst the highest volume across the entire platform. That’s not all, T-Series holds the rights for hundreds of Indian movies allowing it to share them in their entirety on its channel. While the ones being shared for everyone to watch for free are mostly from ten or more years ago, they’re still fetching the channel oodles of views instead of just sitting on shelves and eating dust.

T-Series is also being clever at how it is employing its rights over movies, albums and distributing them on the channel. In addition to videos of every song, T-Series is uploading interviews, behind-the-scenes clips, lyrical videos, sneak peeks, compilations for several occasions like Valentines Day, and more. The most crucial differentiating aspect between T-Series and Pewdiepie’s content, however, is that the former’s work is being watched by everyone and not just the aforementioned esoteric group.

Moreover, T-Series’ videos are something people play on a loop while listening to tracks in the background or at a party, you get the idea. In most scenarios, I’m sure you won’t watch a particular Pewdiepie video more than once. 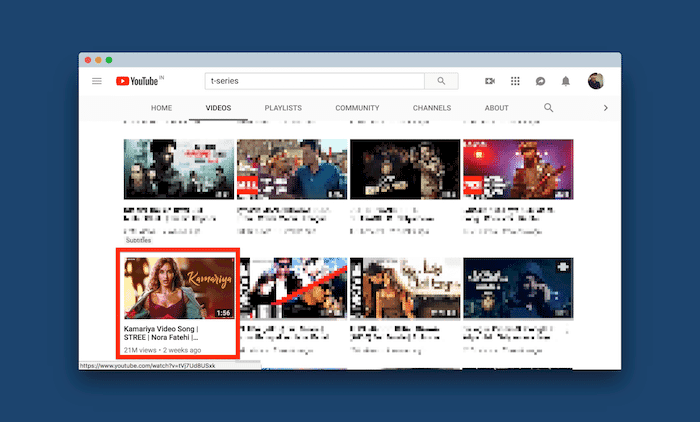 There’s one more critical factor which is imperative to T-Series’ sudden climb on the leaderboards. Obscene material. Yes, a ton of music videos these days in Indian cinemas feature adult content, only for a few seconds but that doesn’t matter. With clickbait thumbnails and by ensuring there’s no nudity, such videos are available to everyone and impervious to YouTube’s guidelines. Even for lyrical videos, T-Series employs a similar approach to thumbnails because of which they end up garnering much more views than they would otherwise.

With the pace T-Series is progressing today, it would be at least 10 million ahead of Pewdiepie in the time span of five months. The third most subscribed account — Justin Bieber — being at just 40 million, T-Series seems to be now all set to be crowned with the leading YouTube channel title without any hassles. Of course, that is considering Pewdiepie doesn’t come up with an overhauled strategy which itself will be a herculean task. For now, though, T-Series will enjoy the top spot for at least a few quarters and believe it or not, this all has happened in just about two years.

While certainly not on the same scale as T-Series, television network Sony Entertainment Network’s YouTube channel is moving up at a staggering rate too attracting over 75,000 subscribers. Its growth story is the result of a similar strategy as T-Series starting from nada subscribers around October 2015 and today, with 30 million of them. It will be interesting to watch whether these individual YouTubers are able to hold on to their lead against powerful Indian entertainment houses.

Was this article helpful?
YesNo
TechPP is supported by our audience. We may earn affiliate commissions from buying links on this site.
Read Next
How to View and Delete YouTube Search History [2022]
#analysis #Pewdiepie #T-Series #youtube