Vivo has recently launched the Vivo V11 Pro, a mid-segment smartphone priced at Rs. 25,990 in India. The smartphone comes with some very interesting features and a pretty decent spec sheet. Soon after unveiling the device, the Chinese brand released four ads, highlighting the USPs of the smartphone. The ads feature Bollywood actor, Aamir Khan, who is the brand ambassador of Vivo in the country. But are these just routine celebrity endorsements or more than that? Read on to find out…

When an acting pro met a smartphone pro

The four ads highlight different USPs of the smartphone. The first ad talks about the dual camera and the camera technology, the second highlights the under display fingerprint sensor, the third talks about fast charging on the device while the fourth one focuses on the phone’s processor.

The first ad, “Vivo Dual Rear camera with Dual Pixel Technology” is a 31-second spot. The ad begins with Aamir Khan bringing out a birthday cake to surprise a friend. As she poses with the cake in the (dark) room, Khan takes her picture with her friends through his Vivo V11 Pro. Later in the ad, Khan is passing through a room when he finds a kid jumping on the sofa with a lot of light coming from the window at the back. He takes out the smartphone, turns on the HDR mode on the device, turning on Backlight HDR, takes a picture of the kid with the smartphone where the subject gets highlighted despite the harsh light in the background.

Khan then goes out to attend a party where he takes picture of one of his friends who is dancing using the Bokeh Mode on the device. And then goes ahead and joins him on the dance floor. After this, text on the screen appears along with a voiceover saying, “Dual Rear Camera with Dual Pixel Technology”, followed by the other two snaps that were taken earlier in the ad. This is followed by a short clip of the smartphone highlighting the fingerprint scanner under the display, the display and the three different color variants of the smartphone. The ad has upbeat music playing in the background all throughout.

“Vivo V11 Pro In-Display Fingerprint Scanning Technology”, is the second ad which is 30 seconds long. The ad starts with Aamir Khan putting on some music while getting ready in front of a mirror. He then unlocks his phone using the in-display fingerprint scanner to open messages. The ad highlights Vivo branding on the back of the smartphone. He then unlocks his phone again using his thumb and taps on the Facebook app. A message on the screen appears saying, “Facebook is encrypted” after which he again scans his thumb to unlock the app and on his feed appears the picture of his friend he had taken at the party in the previous ad (nice touch). 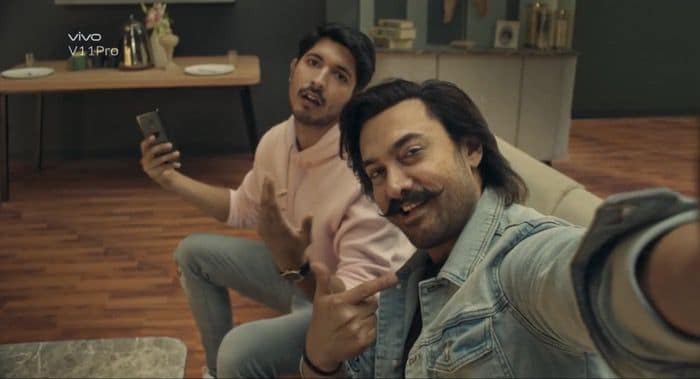 After this, Khan goes to a party where he unlocks his phone by just pressing his thumb against the display, and then takes a picture. He then moves to a restaurant, and when the check comes, he again unlocks his phone using the in-display scanner, opens Paytm using his fingerprint and pays the bill. This is followed by a clip of the smartphone where it highlights the in-display scanner on the device. Along with the clip, a voice over says, “unlock the amazing with in-display fingerprint scanning” while “in-display fingerprint scanning” also appears on the screen as text. This is followed by the same short clip of the smartphone that was shown in the first ad, highlighting the fingerprint scanner, the display and the different variants of the device. The ad has peppy music in the background throughout.

The third ad, “Vivo V11 Pro- Dual Engine Fast Charging” is a 20-second spot that begins with Aamir Khan walking into a room. As he takes out his phone out of his pocket, he realizes the device is switched off as it has no battery. Disappointed at the sight, Khan puts the phone on charging and starts getting dressed up. And by the time he gets ready, his phone is charged, offering about a couple of hours of charge in just minutes. He picks up the phone and says, “fast charge. Be party ready in no time”. This is followed by a short clip showcasing the device and different color variants along with a voiceover saying, “Vivo V11 Pro”.

The fourth ad in the campaign is a 21-second ad, titled, “Vivo V11 Pro – Qualcomm Snapdragon 660AIE processor”. The spot beings with Aamir Khan sitting on a couch with a friend playing PUBG. Khan is playing the game on the Vivo V11 Pro (duh!) while his friend is using some unknown smartphone (and has covered it well with hands all over the back). As Khan’s interest and intensity towards the game grows, his friend starts to struggle as his phone starts lagging. Finding this amusing, Khan playfully swipes up on his phone to open the camera saying, “guess who is going to win” and takes a selfie. He then goes back to playing the game on his phone as disappointment overshadows his friend’s face, Khan enjoys his sweet victory. He then takes the phone in his hand and says, “be a high-speed performer. anytime, anywhere.” This is followed by the same short clip which was present in the third ad.

Remember the last ad campaign by Vivo featuring Aamir Khan and the cat and the dog? Well, we had given that ad campaign a big thumbs up (read our opinion here) and this one deserves nothing less. When you have a celebrity endorsing your product, most of the times, the ad becomes more about the celebrity and less about the product. And when you have someone as larger than life as Aamir Khan as the brand ambassador, the situation gets even more tricky. But we have got to take our hats off to Vivo, that has not only managed to avoid this problem once but twice. 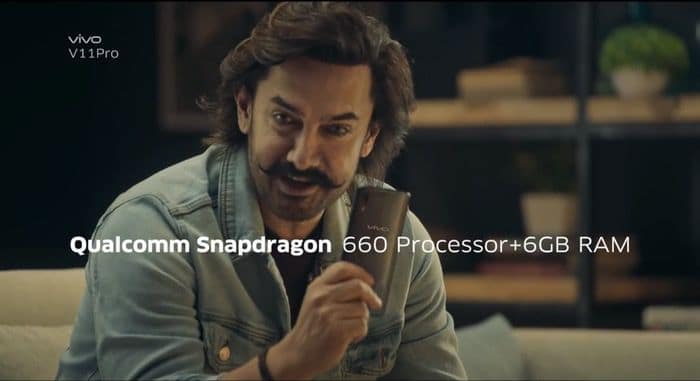 The two ads have our three favorite advertising Ss’ in place. They are both simple, short and straightforward. Both ads highlight the different USPs of the product and have managed to make a convincing pitch for the product without really bombarding the viewer with information and spec details. Both the ads are to the point and cover more than basic details in just about 30 seconds.

In the first ad, we love how Vivo has focused on highlighting different features of the camera and has supported this with pictures taken. In the first instance, the ad focused on the smartphone’s ability to take pictures in low light, the second time it focuses on highlighting the HDR mode by taking a picture of a hyperactive kid with a lot of light in the background and finally, it covered the bokeh mode. 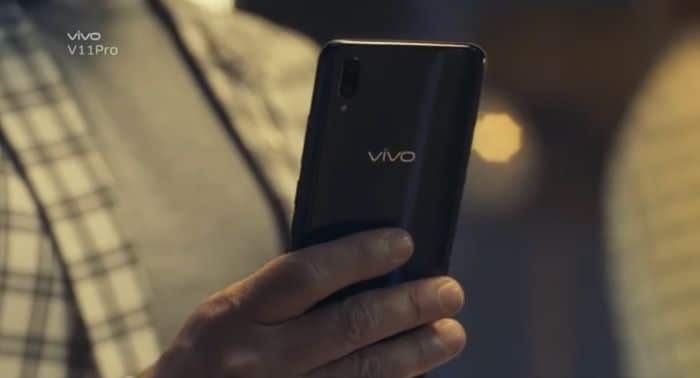 We appreciate how the ad has covered all the bases and has not just “talked” about how great the camera is, as most phones in this range take basic pictures well but struggle in these particular areas. The ad has spotted the problem and presented a definite solution to that problem.

The second ad of the campaign highlights the in-display fingerprint scanner present in the device. While Vivo highlighted functions that many other fingerprint scanners perform, like unlocking the phone, bank transactions, unlocking apps, in the ad, it did manage to make the experience look super smooth and swift (which is often not the case in real life). It was also able to add a slight “wow” factor because of the animations that come alive when you tap on the fingerprint scanner plus the fact that it is actually IN the display also helps.

The third and the fourth ad of the campaign are even shorter. The barely 20-second ads still hit the target on point. The third ad that talks about fast charging highlights how the smartphone gets battery juice worth a couple of hours in a matter of minutes. There is no beating around the bush with this one. He finds his phone out of charge, plugs it in and as he gets ready he gets enough battery on the device to get around. The ad simply shows how efficient and fast charging is on the phone and it just… works! 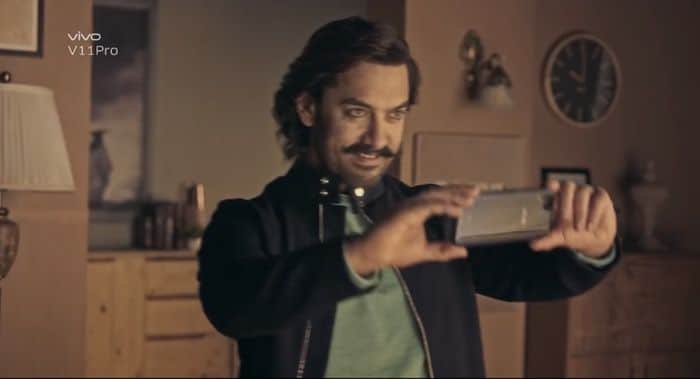 The fourth is not as direct as the last one but delivers the messages just as easily. The ad has an element of joy and competition which we like. The ad not only focuses on how well the device performs in the high-end gaming zone but also highlights how multitasking is a breeze on the phone as Khan opens the camera while playing the game and takes a selfie and then goes back to playing the game. The ad is clever and highlights the smooth experience on the device.

Although Aamir Khan led the ads and gave them direction, we really liked how the star of the show remained the smartphone and its features. Never did we once felt like the ad was about Aamir Khan and not the V11 Pro. Truth be told, the ad might not have had the same appeal, without Aamir Khan. But even if one replaces him with a lesser known actor/model, the essence of the ad will not really get violated.

We also like the short clip at the end which basically sums everything up about the phone and dumbs it down for good. The only thing we did not appreciate in the first two ads was the background music as the upbeat music did not really match the overall “vibe” of the ads, though the background music, although still upbeat felt more in place in the other two ads.

“Focus”ing on all the right things, “unlocking” magic 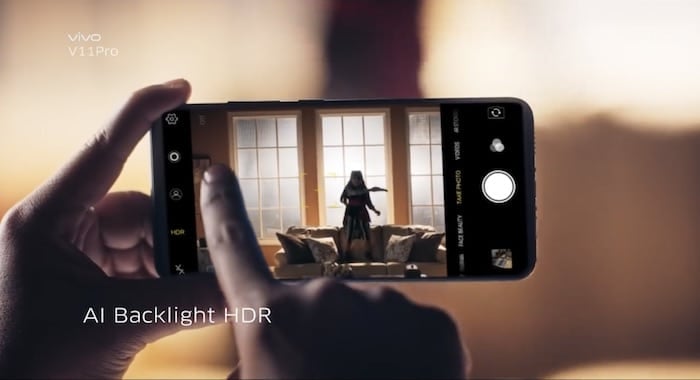 We think the new ad campaign for the Vivo V11 Pro is a very complete ad campaign. All the four ads highlighted the USPs of the smartphone and made using it look very effortless. The campaign has a lot of elements – parties, kids, cakes, friends, and more. Having these many ingredients often ends up creating a disastrous dish but Vivo has managed to create something very basic yet effective with all these elements. The company yet again has used the celebrity face in the ads very wisely and has managed to keep all eyes on its product, which is a pretty big achievement in a zone where ads mostly focus on celebrities.

Is this ad campaign going to help sell more Vivo V11 Pro smartphones? We do not know. But what we do know is that it will definitely tell the users more about its features. Having Aamir Khan on board will get the brand the attention that it needs, and the ad on its own will then take the story forward. Which is the way it should be. Superstars grab attention, but the real stars should always be the products.

Was this article helpful?
YesNo
TechPP is supported by our audience. We may earn affiliate commissions from buying links on this site.
Read Next
[Face Off] Vivo T1 vs Redmi Note 11
#Ad Review #Tech Ad-ons #Vivo #Vivo V11 Pro