It might take time, but expect change to be just as radical

It may sound a little cliched but almost two years after it launched its wireless network, Jio is now fully ready to start its second innings. Two years ago, many people discovered that they could use their smartphone to its fullest extent without having to worry about FUP or data caps. What Jio did to the wireless space in India is nothing short of amazing, with many people now consuming as much data in a month as they would have previously consumed in a year. Tariffs are lower than ever and still falling. The state of Gujarat in India now consumes more data on the Jio network alone than many countries in the world. You get the gist. 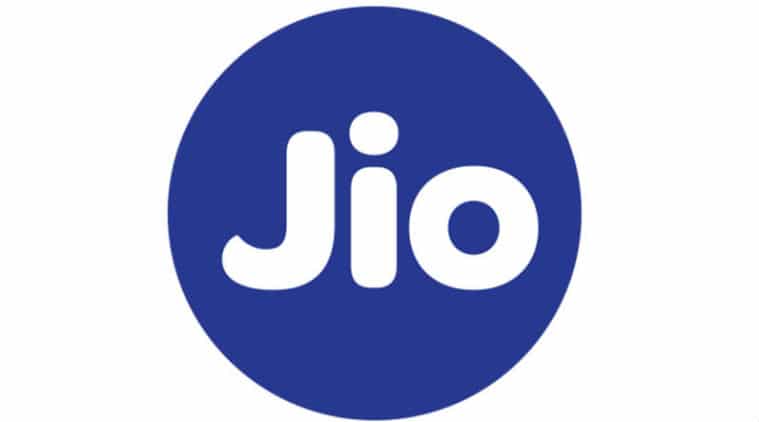 Whatever happened to Jio Giga Fiber?

Not surprisingly, many people expected Jio to make an equally big splash with the launch of Jio Giga Fiber. Jio announced Giga Fiber at its 41st AGM which was held on 5th July 2018. While Jio did announce it with much fanfare, it did not immediately make the service available. People were asked to register their interest in Jio Giga Fiber on the Jio website and that was it. Since then, I have not seen a single person actually get access to Jio Giga Fiber on a commercial basis, barring the people who were registered for the Jio Giga Fiber trials.

The launch of Jio Giga Fiber was in sharp contrast to the launch of Jio’s wireless service two years ago. When Jio’s wireless service was launched, Jio had given a fixed date as to when people would be able to buy the SIM card and start using the service. The date was 5 September 2016 and people were instantly able to latch onto to Jio’s network and start using the network. By contrast, no one has been able to commercially start using Jio Giga Fiber and it’s already the end of October 2018.

It is a matter of infrastructure

The reason for this access disparity between Jio’s wireless service and Jio Giga Fiber boils down to the last mile. When it comes to cellular wireless networks, the last mile is the BTS that’s mounted on a mobile tower. Any company with sufficient financial muscle can lease the towers from companies like ATC or Bharti Infratel and source the wireless gear from companies like Ericsson or Huawei. These are predominantly B2B transactions which can be completed and executed with speed and precision especially in case of cash-rich companies like RIL.

However, in the case of wired broadband networks, the last mile is the coaxial cable/ fiber that goes into a customer’s house or colony. Every house and colony is different. While it may be easy to get access to some colonies/residential complexes in India, many others have signed exclusivity contracts with certain ISP/cable providers or simply don’t want to deal with a new ISP/cable provider.

In the wireless space, tower companies are more than happy to lease space on their towers to newer companies and Jio had no problem is leasing towers from Bharti Infratel, ATC and other such tower providers. However, in the wired broadband space, there is no neutral last mile medium which Jio could lease and deliver its broadband services upon. The UK has OpenReach which is a setting whereby the state monopoly British Telecom’s last mile was unbundled and made available to any ISP under FRAND terms. UK’s British Telecom equivalent in India would be BSNL but BSNL’s last mile hasn’t been unbundled and even if it were to be unbundled, a lot of investment would be required to upgrade BSNL’s existing last mile infrastructure and make it suitable for high-speed broadband.

A brief snapshot about what UK OpenReach is all about.

The lack of a neutral last mile delivery medium in the wired space in India has meant that any company that wants to start broadband services in the country, needs to develop its last mile from scratch. Jio has tried to develop this last mile for years now but seems to have had little success considering that Jio Giga Fiber is yet to be commercially available to people.

Jio has a solid backend network considering the hundreds of thousands of GBs of data that it carries on a daily basis. Jio has the network capacity required for a massive fixed broadband rollout, what’s lacking is an equally extensive and exhaustive last mile reach. With its organic attempts at developing last-mile failing, Jio has resorted to the inorganic method of acquisitions.

There were already rumors of RIL trying to acquire a controlling stake in Den network last year so as to bolster its last mile and those rumors have finally been put to rest this month with RIL officially announcing that it is acquiring a controlling stake in both Den Networks and Hathway. The acquisition was announced alongside RIL’s September quarter results for 2018.

The key question now is that how does it affect Jio’s plans for its fixed broadband network? The answer has many facets:

I have explained how the lack of a neutral last mile medium in terms of fixed broadband was a spanner in the works of Jio Giga Fiber. Let’s go back to the tower analogy again for a moment. Assuming Bharti Infratel and ATC were reluctant in leasing space on their towers to Jio and Jio was having difficulty building its own towers. In such a scenario what would Jio do? Probably buy out an entire tower company? That’s exactly what Jio has done in the fixed broadband space. It has acquired a controlling stake in two of the largest MSOs in the country which means that its last mile which it was developing organically till now just got a massive push. 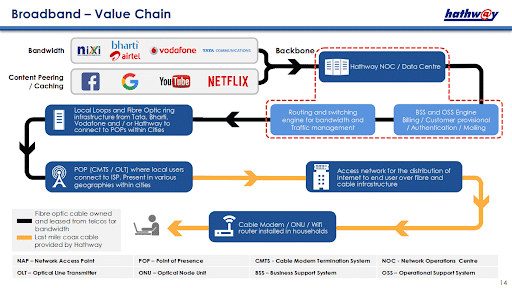 The image above shows the various blocks that form a fixed broadband network. Amongst all the paths showed above, focus on the path that’s yellow in color. That yellow color is basically why RIL acquired Hathway and Den Networks. As I explained, Jio has an excellent backend network of its own. The backend network of Den Networks and Hathway would most probably be discarded or integrated into Jio’s. It is the last mile that Den and Hathway have carefully built over the years that would be of use to Jio especially the access they have to various homes and residential complexes.

Jio has already started work on connecting 50 million homes across 1,100 cities. It will work together with Hathway and DEN and all the LCOs to offer a quick and affordable upgrade to a world-class lineup of JioGigaFiber and Jio Smart-Home Solutions to the 24 million existing cable connected homes of these companies across 750 cities.

Out of the 50 million homes that Jio is targeting, around 24 million, or half its target is now instantly serviceable. This should provide a huge jump start to Jio Giga Fiber’s commercial operations.

2. Content deals in place and impact on DTH operators

Jio has all the content deals in place. While Tata Sky is going through a nightmare right now with its tussle with SPN, Jio has managed to end a dispute with Zee Network and brought them on board the Jio TV app as well. Jio TV now has all the channels that one would expect from a regular DTH subscription. All Jio needs to do is load the Jio TV app on an Android-powered STB along with other OTT apps such as Netflix, which is widely believed to be partnering up with Jio.

As I have said before, with the wireless network of Jio providing as much as 3GB of data per day, the vast majority of the country does not feel the need to have a full-fledged fixed broadband network. In such a scenario, Jio’s best bet at reaching its 50 million households target is to position Jio Giga Fiber as a cable TV first that also doubles up as a broadband network.

With its acquisition of Den Networks and Hathway, which are primarily cable TV providers in the eyes of the public, Jio now has a readily available market of cable TV subscribers which would subscribe to Jio Giga Fiber as long as the prices are feasible. Over the past few years, MSOs such as Den and Hathway have lost a lot of market share to DTH operators such as Tata Sky and Dish TV, and Jio seems serious about reclaiming this lost market share which could be a concern for DTH operators. To quote from Jio’s press release:

However, the LCOs have been steadily losing market share because of increasing competition from alternate technologies like Direct-To-Home (“DTH”). In fact, DTH operators have weaned away over 60 million homes from cable operators who have remained basic TV service providers. With this trend, both the LCO (Landline Cellular Option) business model and the MSOs are under stress.

3. Need to upgrade infrastructure and dealing with LCOs

Despite owning a controlling stake in the MSOs (Multiple System Operators), Jio will still have to put in quite a lot of money to upgrade their distribution boxes and connect them with Jio’s backend network. Not just this but Jio would also have to upgrade the coaxial cable/ fiber cable that lands at the customer premises and consumer premise equipment as well. All this would significantly increase Jio’s capex/opex and might weigh on its profitability.

All these upgrades would take quite some time as well and might push Jio Giga Fiber’s commercial availability well into the next calendar year.

Perhaps the biggest concern is how would Jio deal with the LCOs which are the local cable operators. MSOs directly serve a very small fraction of their subscriber base, the vast majority of the MSO’s subscribers are serviced by several thousand local LCOs. LCOs are generally a one man or two men operations that primarily take care of billing and wiring. However, there are thousands of LCOs in India and how Jio would take care of their interests while pushing Jio Giga Fiber would be interesting to watch.

Jio, by contrast, went with one country, one network policy. Hence, when Jio launched its wireless network two years ago, it instantly outshined rivals in Category B and Category C circles. Over the next two years, Jio’s superior network helped it achieve an edge over rivals in these circles which became evident in its RMS.

Just like the wireless landscape before Jio’s launch, the current broadband landscape is also heavily tilted towards Category A and metro circles. Just look at the speed test image below to see the disparity between fixed broadband speeds within Indian cities. 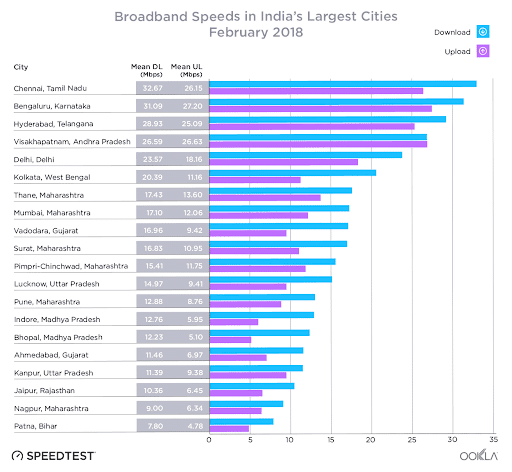 Hence, someone living in a place like Patna or Nagpur will be much more open to Jio Giga Fiber than someone living in Chennai. Apart from this, Den and Hathway’s reach is primarily concentrated in North India while ACT broadband has the vast majority of its 1 million plus subscribers concentrated in South India which it would not let go of so easily.

Jio has done very well in the wireless arena. It has changed the Indian telecom market for good and has managed to gain as many as 250 million subscribers in just 25 months. The wireless network of Jio launched without any hiccups barring the initial interconnection dispute with Airtel, Vodafone, and Idea. The wired network thanks to its unique last mile requirements is taking some more time to become available than originally anticipated. However, with the acqusition of Den and Hathway, Jio might change the wired broadband landscape for good as well.