After it launched the new iPhones, many would not have blamed Apple for sitting back and sipping martinis for the rest of year -surely three iPhones and a new Apple Watch is enough for a well-earned break. But the company is not done for the year just yet. A little invite has been sent out that says, “There is more in making” and while the company has not disclosed what it is going to launch this time, hushed tones in the industry have pretty much dictated that the audience is now going to witness new iPad Pros and Macs. 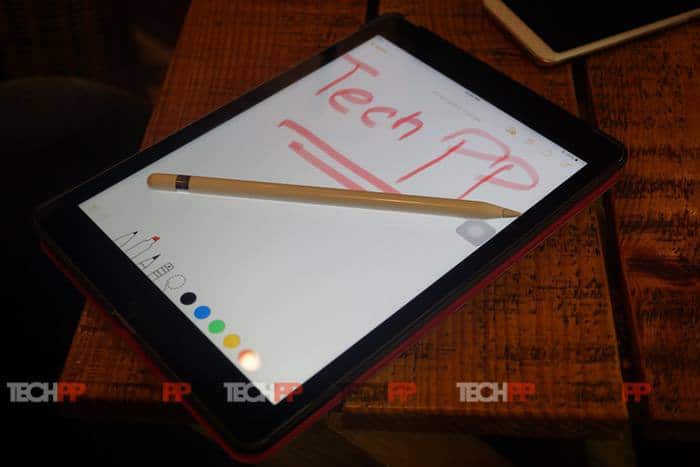 The sound of new iPad Pros and Macs brings forth a river of speculation with many tech enthusiasts taking dives and bringing out what they think has the most probability of happening. But while the industry loves to rave about the mean machines that Apple is going to launch, we shifted our focus a little and decided to give a little attention to one of the accompaniments that go with the Pros, the Apple Pencil.

Apple launched the Apple Pencil in November 2015 and guess what? The stylus has not changed one bit since then. Well, we hope that that will change on October 30. Of course, we do not know exactly what is in store, but we do have a wish list for the Apple Pencil. And it goes like this: 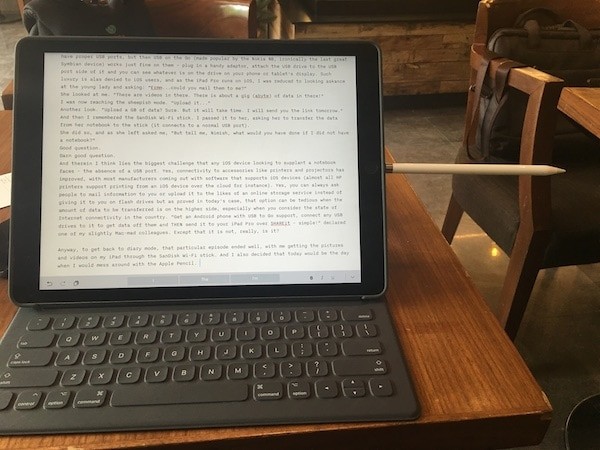 Those who own an Apple Pencil know that charging the stylus comes with its own precaution manuals, especially when you use the lightning port on the iPad to charge it and not the dedicated charger – which we are guilty of doing only 100 percent of the time. It may sound easy to just pop the plug end of the stylus into the iPad Pro’s lighting port, but the way in which the Apple Pencil pokes out of the device while on charge makes it pretty much an open invitation for a series of mishaps. All it takes is a slight brush against the Pencil while it is charging thus to do some serious damage, to all three: your Apple Pencil, the Lightning port on the iPad, and of course, the iPad itself. We have often seen the charging ends of the Pencil bend and even break because of this problem and God forbid if the charging end of the Apple Pencil gets stuck in the iPad, then a visit to the Apple store with a hefty bill will definitely come your way. Hence, a different way of charging the Apple Pencil tops this list. And solving this problem might not be too difficult either. All that Apple has to do is replace the male lightning port on the stylus with a female one, allowing it to be charged with an iPhone/iPad charger. Easy, right?

2. Get rid of that cap already!

One of the many issues that come tagging along with an Apple Pencil is the headache of keeping that cap covering the lightning port on the stylus safe. Whenever we put our Apple Pencil on charge, losing that little cap is a thought which haunts our soul. Yes, we know it will not have an impact on the working of the stylus but no one wants to lose that little cap, do they? Because there is no specific place for the cap, once you put the pencil on charging, it rolls around like stray puppy desperately waiting for its mother to come back. And again, we do not think the problem is difficult to solve. Either the company can lose the cap altogether or if it is an essential part of the Pencil’s being, one can simply make it more like a pen cap which can be attached to the tail of the pen while using the pen because it is hollow on the inside. While charging, just place the cap on the tip of the Pencil!

3. Let it do more than just scribble and sketch 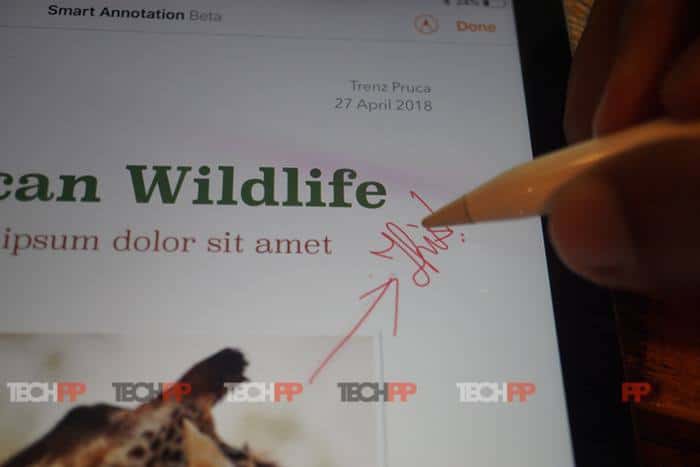 Here we are shamelessly taking a leaf out of Samsung’s S Pen book and asking Apple to give the poor Pencil a little more to do than just scribble and sketch. Just as the S Pen this year rose above the basics of being a stylus and bundled a bunch of new features with its note making capabilities, we would like to see the Apple Pencil take a similar leap of faith. For instance, as the iPad can be used as a teleprompter for presentations, the company can add clicker like functions to the stylus. Not just that, we think, the iPad Pro comes with some extremely underrated cameras, so if the Apple Pencil can somehow help in taking pictures from a distance, then maybe people would use the cameras on the iPad more often as well.

Have you ever taken out the Apple Pencil, all set to scribble away, connected it to your iPad and then realised that it is out of charge? Well, this happens to us ALL THE TIME. And to avoid such disappointments, we would definitely like to see battery indicators on the Apple Pencil itself. Imagine a line of 3-4 LED indicators that blink with happiness when they get charged or scream for some juice when it is running out or just one LED indicator with different colored lights showing different levels. Is it too much to ask? Huh? Huh? 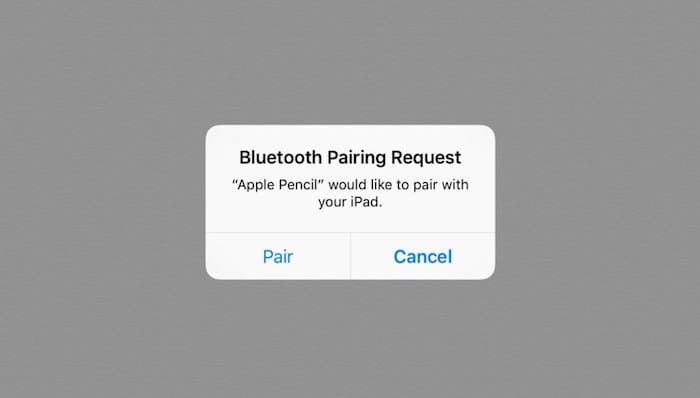 Like the S Pen which connects to the Note 9 the second you take it out of the phone, like the AirPods that connect to a device the minute you open its case, we would like to see the same kind of swiftness and ease while connecting the Apple Pencil too. The part where you have to plug it in your iPad to connect even when it has Bluetooth inside makes the connectivity bit on the stylus seem almost ancient. Plus you have to check the connectivity status by either writing on the screen or checking connected devices in the Bluetooth section. Tad inconvenient, isn’t it?

6. Breathe some colors into that white body please!

There is no sugar-coated way of saying this, WE NEED MORE COLOURS!

Yes, you heard it right. It is has been quite some time since the Apple Pencil has been coming in that sheer glossy white color. All while there are so many colors for the iPhones and the new Apple Watch. What sin has the poor Apple Pencil committed to make the company restrict it to just one color? Bring us the blues, the reds, the yellows, and put a fun spin on it. After all, a lot of the people who use an Apple Pencil are artists. They would love it, we are sure. We certainly would. It would also give it a bit more life. 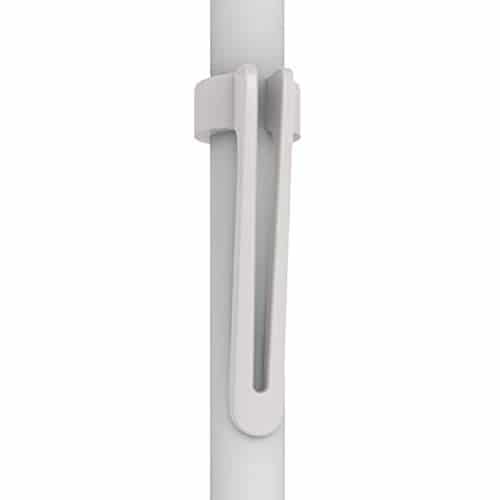 All the Apple Pencil users know that using the Apple Pencil is a lot more fun than carrying it – it can easily get lost even in a handbag. This is because there is no definite compartment or place for the Apple Pencil in the iPad or the Smart Keyboard which is Apple’s own accessory for the iPad. Yes, there are some dedicated covers for the pencil and some third party keyboards have dedicated slots for the stylus in the market. That said, we would like a pen-like clip on the end of the pencil which would make it easier to carry around. One can clip it on the shirt or the pocket of a bag without having to worry about the Pencil slipping out or getting lost.

…And one more thing

We think now that Apple has two variants of the iPad, the iPad Pro, and the more affordable iPad that support the Apple Pencil, the company should consider bundling the iPad Pro with the stylus so that it becomes an integral part of the device and not remains something that is just extremely secondary. It would also make people use it more often. And hey, take it from us, the iPad is a whole lot more fun (and productive) with dat pencil!

Was this article helpful?
YesNo
TechPP is supported by our audience. We may earn affiliate commissions from buying links on this site.
Read Next
How to Quickly Convert Images on iPhone and iPad Using the Files App
#apple #Apple Pencil #iPad Pro #Opinion