Google has been a longtime backer of web technologies and believing a browser is all you will need to perform just about any computing task in the future. And today it’s solving one of the hurdles which have troubled developers since the beginning — image compression. Google’s Chrome Lab Teams has introduced a new online tool called Squoosh which can dramatically bring down your pictures’ quality in seconds. 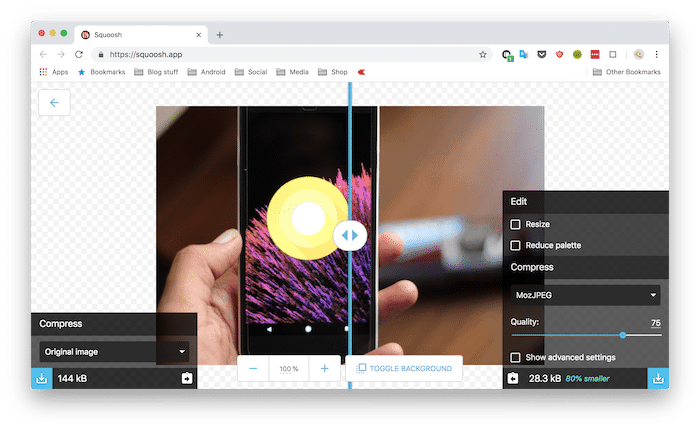 Squoosh, which was unveiled at the company’s Chrome Dev Summit, harnesses a bunch of recent advancements in web technology to compress images in a way that you won’t lose any critical amount of quality. It’s compatible with nearly every format there is such as PNG or WebP and lets you perform a host of actions including resizing, color palette adjustments, and more. In addition, you have the option to compare the results beside the original in a 1:1 interface.

The goal, however, is not to add just another image compression tool to the already well-trodden market. It’s to showcase what those new web technologies are capable of (it was launched at a developer conference) and allow developers to turn their images web-ready in seconds without going through a complicated software.

That clearly shows when you land on Squoosh the first time. It’s responsive, loads almost instantly, adapts to all screen sizes, and delivers what you came for without any fuss. Being a Chrome OS user, the feature I’m more excited about, though, is the fact that it works offline. The web-oriented operating system has always lacked a capable offline tool for compressing and resizing images which, in fact, is the only purpose I still carry around a Mac.

You can try Squoosh by heading over to this link. It’s also open-source, so if you’d like to learn more about it, you can check out its GitHub page.

How to Use Notion Web Clipper to Save Any Page on the Web to…
Wondershare Repairit Online is a free web tool to repair…
The New Apple TV 4K can Magically Color Calibrate your TV…
Change Your iPhone's Wallpaper to Your Favorite Images…
How to Speed Up Your Web Browser and Prevent it from Slowing…
Simplified: An All-in-One Tool for All Your Marketing Needs