Samsung has today announced that some of its 2018 and 2019 smart televisions will soon be integrated with support for Apple’s iTunes and AirPlay 2 services. According to the company, the new services will come pre-loaded on some of the upcoming 2019 models but would require a firmware update on the older 2018 models. Once available, users would be able to access iTunes content like TV Shows and Movies on their televisions. In addition, they could also buy or rent any of the content straight from the iTunes app present on the television itself. 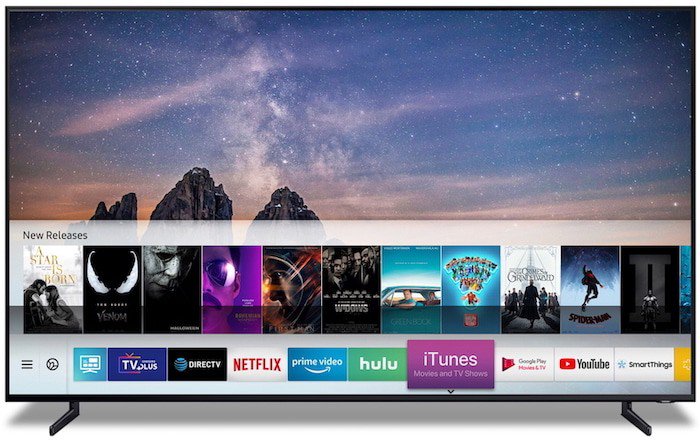 It is the first time Apple is allowing any third-party devices the access to its iTunes content, except for Windows PCs. All iTunes’ TV Shows and Movies will be available in 100 countries on the supported 2018 and 2019 smart television models. To avail and serve this content, a dedicated app will soon make its way on these smart televisions. This app is expected to have hooks for Samsung’s proprietary voice assistant, Bixby. Using which, users would be able to easily navigate through the content.

Talking about Apple’s proprietary wireless streaming standard, AirPlay 2, the company said that it would be available in 190 countries and will allow users to stream any kind of audio and video content from Apple devices directly to their Samsung’s smart televisions.

Here’s a statement from Apple’s Senior Vice President of Internet Software and Services, Eddy Cue, on their partnership with Samsung,

We look forward to bringing the iTunes and AirPlay 2 experience to even more customers around the world through Samsung Smart TVs, so iPhone, iPad and Mac users have yet another way to enjoy all their favorite content on the biggest screen in their home.

As of now, Apple has no official word on extending their support for iTunes and AirPlay 2 to more companies. However, with their new video streaming service reportedly expected to be launched sometime later this year, chances are more companies could end up on the list.

Update: Vizio and LG have also announced the AirPlay 2 will be coming to their 2019 televisions.

Was this article helpful?
YesNo
TechPP is supported by our audience. We may earn affiliate commissions from buying links on this site.
Read Next
Apple Close to Something Greater than the Mac, iPod or iPhone
#apple #CES 2019 #itunes #samsung