Google is making a lot of interesting announcements at CES this year, mainly with regards to the Google Assistant. In addition to a new set of Google Assistant devices from partners like Lenovo and Sonos, one of the most fascinating and helpful announcements coming out of CES is actually a new built-in feature called the interpreter mode. 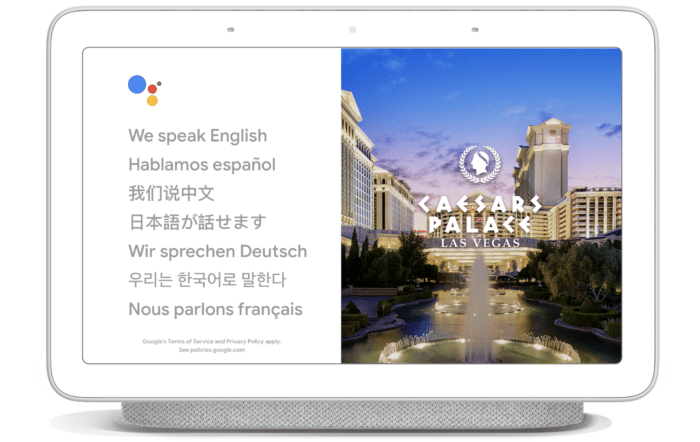 Interpreter mode is a new feature that is said to roll out as an update over a couple of weeks on Google Home devices and smart displays. If you’re in a foreign county or meeting with a person who does not speak the same language as you, the Google Assistant can be used as a translator, or more so as an interpreter in order to get real-time translations of words and sentences as and when you speak in the form of voice output as well as text on screen to aid the conversation.

The Interpreter mode can be triggered by saying “Hey Google, be my French interpreter” if you want to translate from or to French or replace it with any language you wish. The list of supported languages hasn’t been provided yet, but gradually most widely spoken languages should be available in interpreter mode. Google says they’ve developed this feature keeping in mind tourists and people who travel often to various countries and need to communicate with local stuff at hotels during check-in or understand local rules and schedules.

Though Google Translate already offered a similar service of using your voice in order to translate words or sentences, the interpreter mode is more of a seamless method to converse with a person as the translation is real-time and instant. The main aim of the new interpreter mode is not just to translate from one language to the other, but to encourage you to have conversations with those who do not speak the same language as you without having to struggle too much.

We spent a brief time with the new Interpreter mode and came out very impressed. The Google Assistant is smart enough to understand the context and the whole experience was very slick.

Was this article helpful?
YesNo
TechPP is supported by our audience. We may earn affiliate commissions from buying links on this site.
Read Next
How to Fix Google Chrome Translate Not Working
#CES 2019 #google #Google Assistant #Interpreter mode