Time not only tends to fly but in many cases tends to dull the memory. Today, everyone and their granny is going on about folding phones and dual displays – and we have seen a few samples of each. We are being told that these are the future. Truth be told, they are just reformatted pages of the not too distant past – unless you consider a dozen years to be a long time indeed.

For believe you me, we had the perfect dual screen and foldable phone waaaaay back in 2007. No, I am not high on anything. At that time, dual displays and foldable phones were not the amazing stunning things they are considered these days. In fact, if you cast your mind back to that time, the Moto Razr was foldable and had a dual display too, as did some other phones. But the daddy of them all came from Nokia. 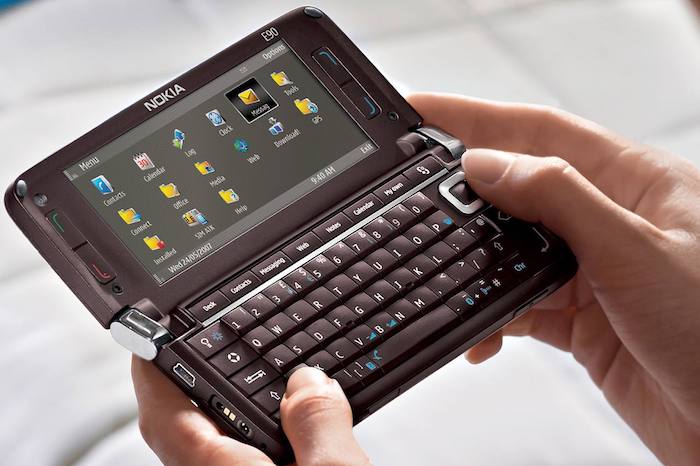 I am talking about the Nokia E90. Perhaps the greatest Communicator of them all (so sorry, Simon Sinek).

For those who were born recently or come from another planet or think that Nokia is basically stock Android, well, the Nokia E90 was part of Nokia’s epic Communicator series of devices that were aimed at the enterprise or business user. And while the Communicator was always known for the fact that it could open from the side (rather than the base as in the case of flip phones), to reveal a larger display and keyboard, I do not think the brand – or any other brand – ever implemented the concept of a foldable phone with two displays as well as Nokia did with this one.

From the outside, the E90 looked exactly like a normal E or N series phone (the E series were smartphones for enterprise users, the N series for multimedia fans), with a 2.0 inch TFT display and an alphanumeric keyboard that you used to see in candybar phones in those days. It was only when you looked at its sides that you realized that this was an unnaturally thick phone – at 20 mm, more than two iPhone XS’ put together. But that was because the phone opened from the side to reveal a large 4-inch display on one side and a full QWERTY keyboard on the other. And that was an 800 x 352 resolution display, which was pretty much as good as it got on mobile phones in those days. The keyboard too was perhaps the best implementation of the QWERTY I have seen on a mobile phone, matched perhaps only by the BlackBerry Passport many years later.

The phone had a 1500 mAh battery that was pretty massive in those days and comfortably gave users two days of hefty usage and the connectivity options included 3G, HSDPA, Wi-Fi, infrared, Bluetooth and GPS. It ran on Symbian Series 60, which might not sound quite as amazing as Android and iOS, but hey, you could create, view and edit MS Office documents on it, and with a few software tweaks even send fax (remember those) from the phone. Users had access to about 128 MB onboard storage, which could be expanded to 2 GB, which, believe me, was a truckload in those days. And oh yes, it had a very good 3.15-megapixel camera for photography and a rather more basic front facing camera for video calls.

But this piece is not really about the hardware or software on the device. What was really amazing was the manner in which Nokia had designed it all. You literally had the souls of two phones in a single body – a “normal” phone when it was shut, and a super smartphone that was almost like a mini notebook when it was open. And for all the slowness of Symbian (and it could be a pain), the two co-existed with each other almost seamlessly. You could switch from one to the other without too many problems. Both had good displays, both had great keyboards. And in essence, they gave you the best of both worlds – that of a normal sized phone with a routine keyboard, and that of a larger display with a “proper” keyboard. All this was held together in perhaps the most solid frame I have ever seen on a phone – the phone folded on a very solid metal hinge on the left, and while the paint on the body did peel off, when the phone did take a fall, my concern was more for what it fell on than the device itself (oh them 3310 feels). And it did not weigh a tonne – at 210 – grams, it was just nine grams heavier than the glassy, single display Galaxy Note 9!

Yes, the sleek phone (read Motorola and Sony Ericsson) crowd did poke fun at the E90 and called it a pencil box. But the truth is that that very frame gave it a certain gravitas. It was certainly THE phone to flaunt for quite a while. Because even more than a BlackBerry, no other phone screamed “I mean business” like this one.

It had dual displays. It had a foldable design. It had a proper hinge and did not involve twisty-fragile-displays that folded in and out, or two displays that were carbon copies of each other. It offered the small and large screen experience in one solid, substantial and in some views, even stylish package. And most important of all, it bloody worked (barring some issues with a microphone in some units).

Just remember that the next time a brand tries to make you go gaga over a dual display or a foldable phone.

It has been done before. And brilliantly.

Hope to see you later, Communicator!

Was this article helpful?
YesNo
TechPP is supported by our audience. We may earn affiliate commissions from buying links on this site.
Read Next
With Football Manager 2023 Touch, Apple Arcade finally has its “killer ...
#Dual Display #nokia #Nokia E90 #Opinion