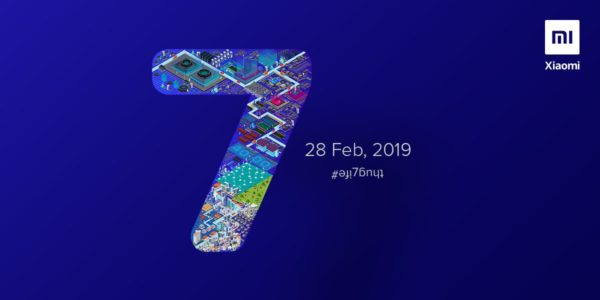 Manu Kumar Jain, Global VP of Xiaomi tweeted the official teaser image with the confirmed date of launch and apparently seven hints related to the smartphone hidden within the image. Since the device was already launched in China sometime back, we more or less have the confirmed specifications of the device, except for a few region-specific changes that Xiaomi might make, like different RAM/storage variants.

Mi Fans, mark the date! RT & spread the word if you want to own this beast.

PS: there are more than 7 uber cool hints in this picture. Any guesses? 😎#ԀW8ㄣ pic.twitter.com/oVL22Pksvc

The major highlight of the Redmi Note 7, that also fired up some controversy is the 48MP rear shooter which “effectively” produces images of that high a resolution, but technically outputs 12MP pixel binned images. The Note 7 Pro on the other hand which was also rumoured to launch sometime soon is expected to come with a true 48MP IMX 586 sensor from Sony. Accompanying the f/1.8 primary shooter is a 5MP depth sensing unit. The front houses a 13MP selfie shooter housed in a water-drop style notch, a first for Redmi smartphones. The display is a 6.3-inch Full HD+ panel.

Under the hood, the Redmi Note 7 will come equipped with the Snapdragon 660 SoC found on devices like Xiaomi’s own Mi A2, the Asus Znefone Max Pro M2 and the Realme 2 Pro, all belonging to the same price bracket at which the Note 7 is expected to arrive. RAM and storage options includes 3+32GB, 4+64GB and 6+64GB, but all of these variants may not launch in India.

The battery capacity has become a staple 4000mAh now on the Redmi Note series phones, but a much-appreciated inclusion this time around is the inclusion of a USB Type-C port to charge the device. Again, a first for the Redmi series. Talking about firsts, this is also the first Redmi phone to come with a glass back. The phone will run MIUI 10 based on Android 9 Pie out of the box.

Poco set to launch the Poco X2 with Extreme Refresh Rate and…
iQOO coming with India’s first Snapdragon 865 and 5G phone…
Redmi Note 11T 5G Review: A Redmi Note 11, but not THE Redmi…
Xiaomi Redmi Note 8 and Note 8 Pro Launched in India
OnePlus 8T Specs, Confirmed: What We Know For Sure About the…
6 Cool Things About Pixel 6 and Pixel 6 Pro Officially…