They have been causing a fair deal of confusion.

They look so similar from the front that each can be mistaken for the other. Their innards are very similar too. And while there is a price gap between them, it, at times, seems as if the lesser priced device has better options as compared to the more expensive one. 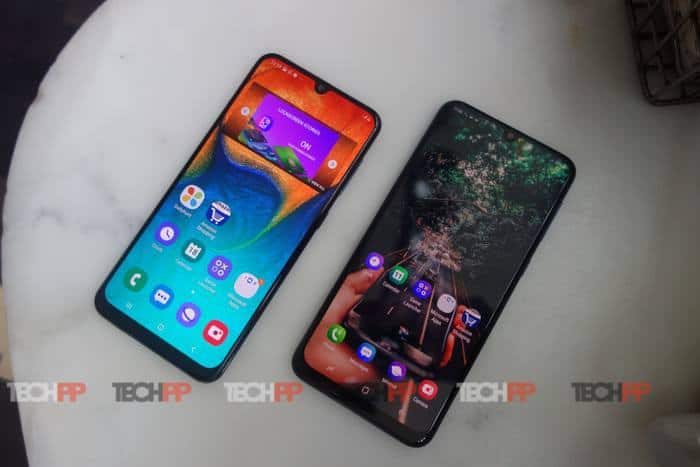 And they come from the same brand. And were literally released within a few hours of each other.

We are talking of the Samsung Galaxy M30 and the Galaxy A30. The phones were released in quick succession, and well, as they belong to different series, one would have thought that they would be rather different from each other, but both have an uncanny resemblance to each other in terms of specs and even design to an extent, and what’s more, are not separated by a huge price margin.

Small wonder they have been causing a fair deal of confusion among consumers looking for a phone in their price segment. So well, without any further ado, here is our attempt to break down the differences between the two and figure out which one works better. A confession: we ourselves got confused a few times in the process.

They both have similar displays, and even notches 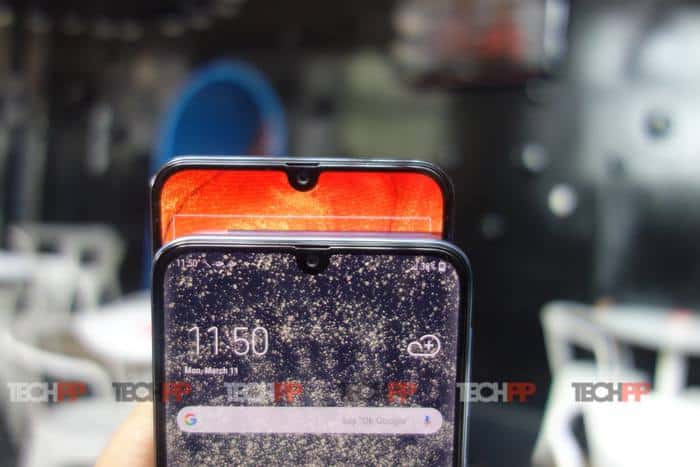 Seen from the front, both devices are uncannily similar. And that is because both have 6.4-inch Super AMOLED displays with a drop notch (what Samsung calls Infinity U displays) and full HD+ resolutions (2340 x 1080). Some might think the A30 has a slightly brighter display, but the difference is really marginal. The similarity between them is uncanny and frankly, we cannot draw a line between them, although a key point to note is that the A30 comes with Gorilla Glass 3, while the M30 does not.

The A has A-grade looks…

In terms of broad design, both phones follow the same basic format – plastic/carbonate backs, rounded corners, power and volume rocker on the right, speaker grilles and USB Type C port and 3.5 mm audio jack on the base, slightly oval fingerprint scanner on the back and the rear cameras in a vertical capsule shaped unit on the top left corner on the back. What however separates them is the design of the back – the A30 has a slightly more glossy and reflective back but thanks to some serious design magic, it reflects colors in stunning patterns and looks far more premium than the smart looking M30 which tries to mimic s gradient finish, blending silver grey into dark blue. The A30 is also slightly more compact and a little lighter, but it is not a difference that will strike you straight away.

Both the Galaxy M30 and the A30 are driven by Samsung’s own Exynos 7904 octa-core processor. A firmly mid-segment processor, the Exynos 7904 is supposed to be a notch above the Qualcomm Snapdragon 636 and is a dab hand at handling routine tasks but stumbles ever so slightly when you get into heavy-duty gaming.

The M30 has got more RAM and storage options 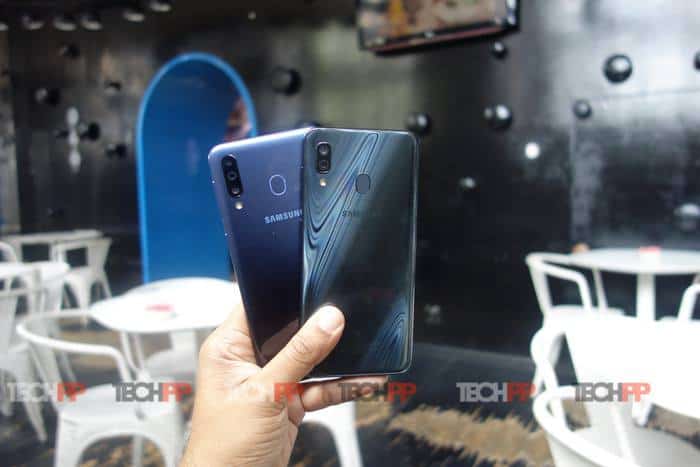 Both phones have got 4 GB RAM and 64 GB storage options, with storage being expandable by 512 GB using a dedicated micro SD card slot. However, the M30 has a slight edge in the fact that it has a 6 GB RAM and 128 GB storage variant as well. And what’s more, that variant is available at a price that is very close to that of the A30!

…and Dolby Atmos too!

Rather remarkably, it seems that the lower priced M30 comes with support for Dolby Atmos over headphones, while the A30 does not (we could not find any mention of it). This might give the M30 a slight edge in the sound department.

Can two cameras be better than three? 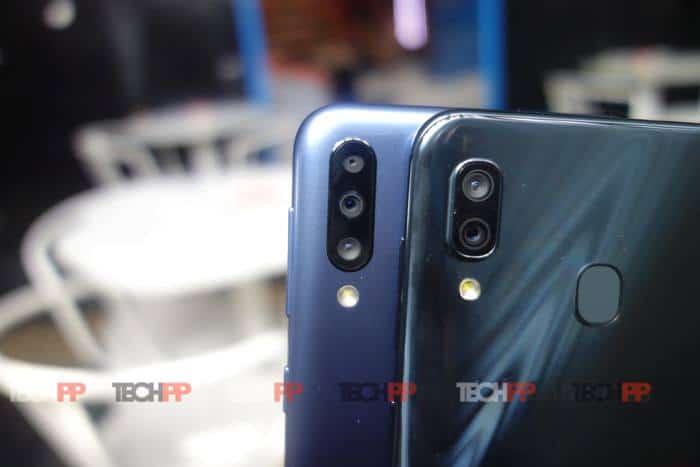 When it comes to cameras, it would seem at first glance that the M30 has the edge, having three cameras on the back to the two on the A30, but a closer look reveals that things are not as clear cut as that. The M30 has a 13-megapixel main sensor, a 5-megapixel depth of field sensor and a 5-megapixel ultra wide sensor, while the A30 has a 16-megapixel main sensor and a 5-megapixel ultra wide sensor. However, the main sensor of the A30 has a much larger aperture – f/1.7- as compared to its counterpart on the M30 (which has an f/1.7 aperture). That would seem to indicate that while on paper, the M30 might have a slight edge on portrait snaps thanks to that depth sensor, the A30 would score in low light shots and might also have better light handling. Both phones have largely similar 16-megapixel front-facing cameras

Both phones with large batteries, but the M30 has a larger 5000 mAh battery as compared to the 4000 mAh one on the A30. Both phones come with support for fast charging with 15W chargers in the box.

The biggest change is a soft (ware) one 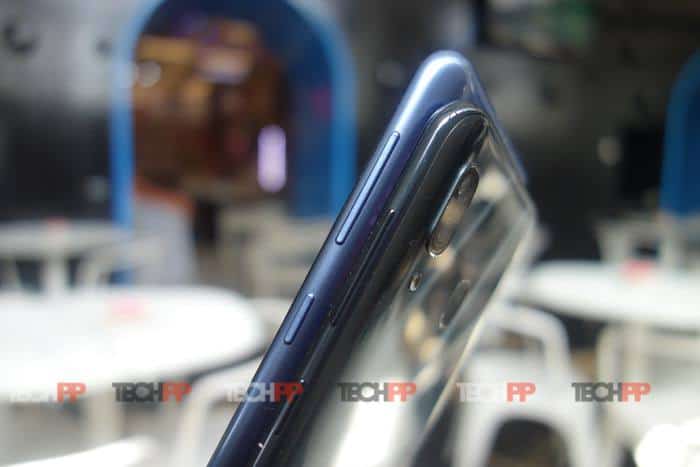 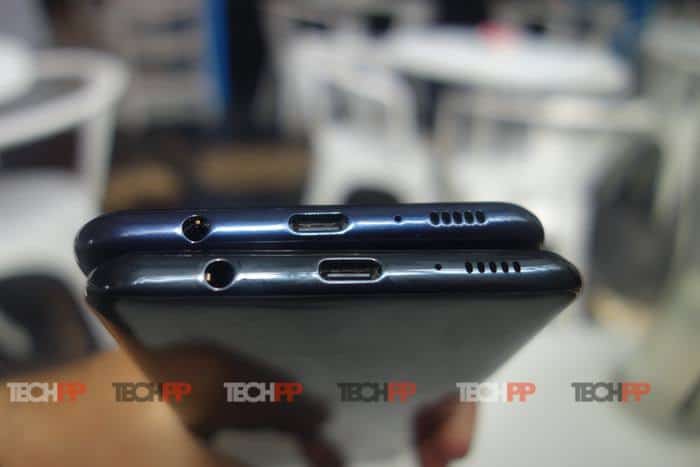 So which one is the better option? Honestly, we think the A30 has the better design, water resistance, perhaps slightly better (if fewer) cameras and rather crucially, newer and cleaner software. But that does not totally rule out the M30, which hits back with more cameras, a larger battery, a 6 GB/ 128 GB option that does not cost too much more than the 4 GB/ 64 GB of the A30 and perhaps slightly better sound. Both phones pretty much cancel each other out in terms of display and processor. So which is your Galaxy? It depends on your priorities. Both are very well stacked with features for the prices they charge. More proof, if any were needed, that Samsung has really upped its mid-segment smartphone game.

Update: We have removed the reference to the Galaxy A30 being IP68 water resistant as we have no official confirmation on this, notwithstanding claims by other sites. We will let you know when there is greater clarity on this front.

Was this article helpful?
YesNo
TechPP is supported by our audience. We may earn affiliate commissions from buying links on this site.
Read Next
Snapdragon 782G vs Snapdragon 778G Plus: What Has Changed?
#comparison #samsung #samsung galaxy A30 #Samsung Galaxy M30