“You can handle it, but please do not try to fold it.”

Those were the standing instructions my colleagues and I were given as we were introduced to one of the most talked about devices of the year, the Huawei Mate X. The phone with a foldable display was showcased by Huawei at MWC 2019 and grabbed a lot of attention as the main rival to Samsung’s Galaxy Fold device. So are foldable phones the future and is the Huawei Mate X THE foldable phone we have been waiting for? 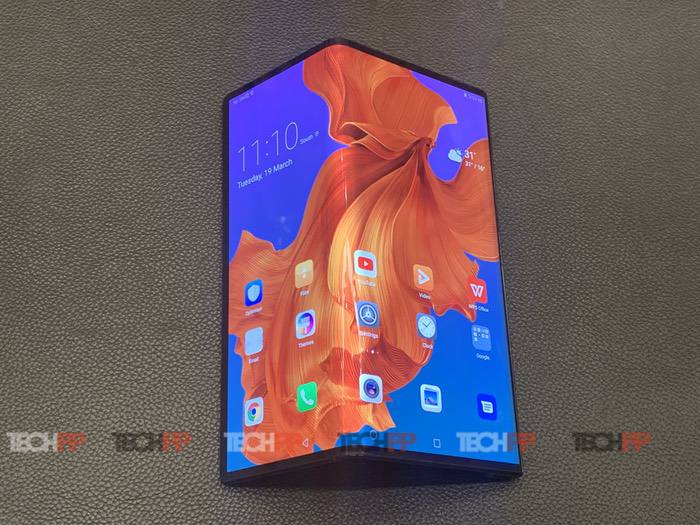 It is perhaps too early to answer those questions. The phone itself is expected in India later this year and a global launch is on the cards in a few months. But after about an hour’s briefing and some minutes with the phone, here were my five main takeaways (I am not going to talk about tech specs):

1. It is heavy and looks like the Kindle Oasis when opened fully

All right, let’s get this out of the way – the Mate X is heavy. It is 161.3 mm in height, which places it close to the Galaxy Note 9. But the first thing that will strike you when you hold it is just how heavy it is. At 295 grams, it is only slightly lighter than the iPad mini which is 300 grams. Some will say that it has a bigger display than the iPad mini when opened so weighing about the same is not a sin. Well, the fact also is that I do not expect to carry the iPad mini in my trouser or coat pocket, which I do expect to do with the Mate X (it is about the size of the Note when folded).

That said, it has a very solid feel to it, especially when folded into a single phone form factor. When opened out, it reminded me a lot of the Kindle Oasis, with the camera holding unit being slightly thicker and the remainder of the extended display being super slim (5.4 mm). This also means that when it is opened, it is best held from the thicker end, again a bit like the Oasis – what Huawei refers to as a handheld bar design. When shut, it is about 11 mm thick which is not too bad when you consider that it folds out to become an 8 inch display. While I suspect that the weight of the device will make it difficult to use as a standalone phone, the build of the device, especially when folded is rock solid!

2. Folding around a very solid hinge, and locking into place 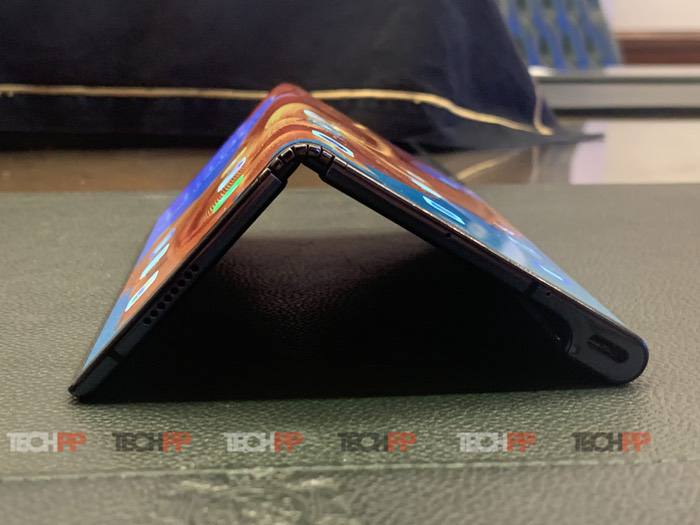 As this is a device with a display that folds inwards, a lot depends on the hinge around which the display turns. And from what I could see, it is brilliantly designed. No, we were not allowed to fold the phone itself but the process seemed smooth enough and the hinge actually recesses a little when you fold the phone. Incidentally, when you fold the display, it locks into the camera unit, with a very reassuring click sound. So there is no chance of the display opening accidentally, when you shake the phone. As I said in the previous point, this is a very solidly built phone.

3. It is slick and works VERY smoothly 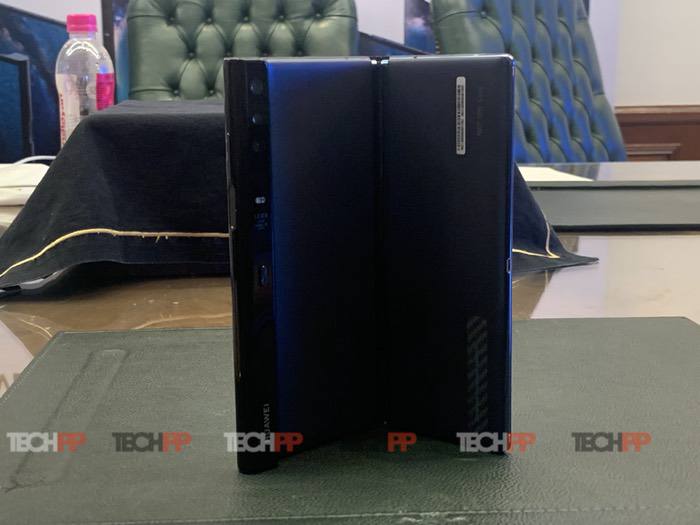 Heavy it might be but it is very sleek and for the few minutes I did use it, I can attest that the Huawei Mate X performed with incredible smoothness. Whether it was because of the Kirin 980 or the 8 GB RAM or Huawei’s sheer engineering magic (I suspect it was all three together), there never was the feeling that one was using a prototype device. What in particular was absolutely spectacular was the way in which the device switched from a smaller display to a larger one when it was folded out. There was absolutely no lag or even a screen stutter in the process it was as if what was on a single display had fluidly flowed into a larger one. Of course, we saw this in the home screen mode – things might not be so smooth when it comes to individual apps, but Huawei is believed to be working with app developers to optimize apps for both display sizes. Split screen mode where you can work on two apps side by side is quite brilliant on that large display. Another remarkable feature of the phone is how, when folded, it switches from one display to the other – just turn it around and the side that you are facing will light up. It is a lot of sensor magic, and very well implemented. Incidentally, the change in size between the front and back displays (the front is 6.6-inches, the back 6.38-inches) is not really noticeable – the only way to tell which side is the rear is the bar with the camera. Which brings me to the next point.

4. It has the best selfie cameras ever…. 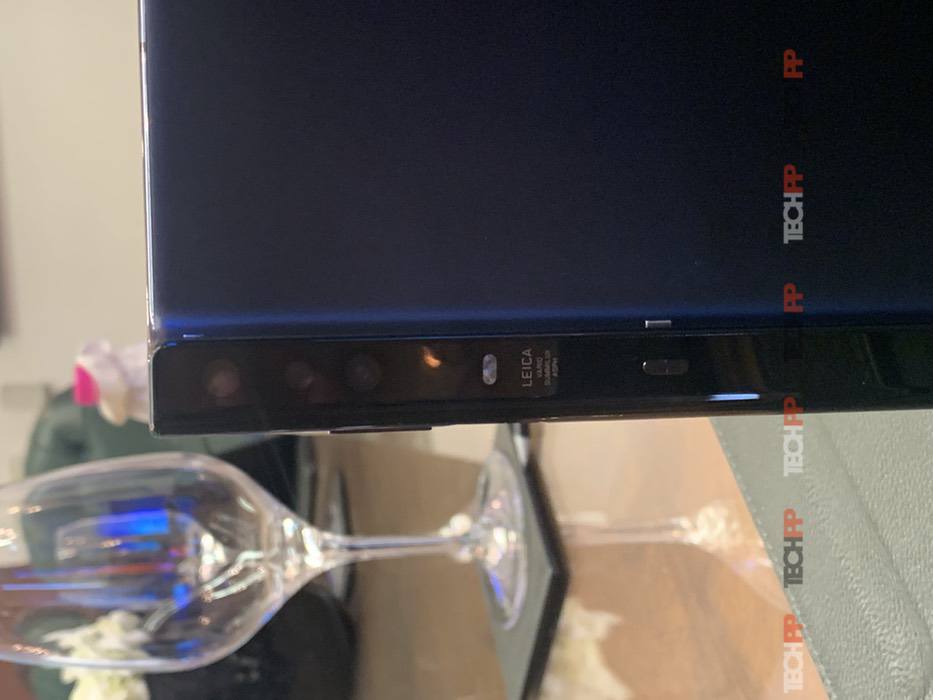 Everyone has been talking about the foldability of the Mate X, but what a lot of people seem to have missed out is the fact that it will perhaps come with the most powerful selfie cameras we have seen on a phone. And that is because the three camera set up from Leica – 40-megapixel wide angle, 16-megapixel ultra wide and 8-megapixel telephoto sensors – work as BOTH the rear and front-facing cameras. Just flip the phone around and you get into selfie mode. In terms of sheer hardware, these are easily the best selfie snappers I have seen. The software has not been optimized as yet but odds are that you will get very similar interfaces for both rear camera and selfie camera mode, which is a rarity!

5. The display is big, gorgeous… but plastic 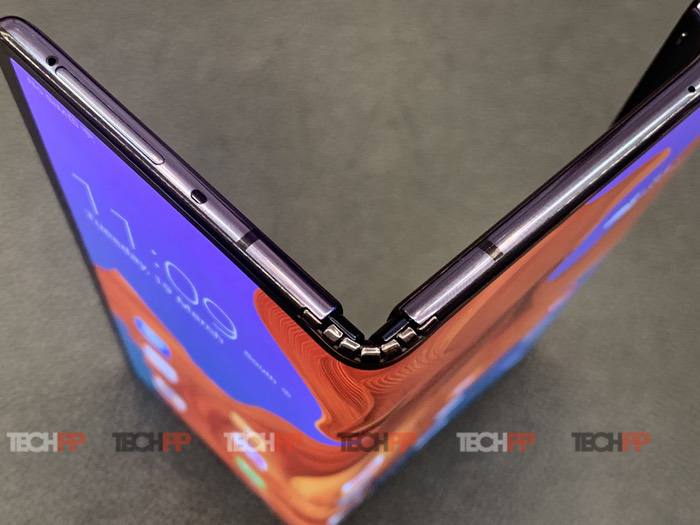 There is no way of hiding this, and I know that this is a prototype device, but that display of the Mate X is a plastic one. Yes, it is OLED and has a resolution of 2480 x 2200px when open, and 2480 x 1148px in front and 2480 x 892px at the back, but from the moment you touch it, you know it is not glass. Is this good or bad? Well, it has its pros and cons. It definitely is not as reflective as glass is. Its color reproduction too seemed very impressive if a little on the loud side (think Samsung a few years ago) and I had no complaints about the brightness. The touch, however, felt very different although it was just as responsive as glass. I also suspect that it is gone to be prone to scratching and creasing, something which is going to be a major concern as the phone is going to rest on that display when folded. Interestingly, I could almost feel a slight bump at the place where it folded back/out when it was opened, although we were told that this was because of it being a prototype. Huawei is also working on a special protector to make sure the display stays smudge free – I so hope it is bundled with the device. 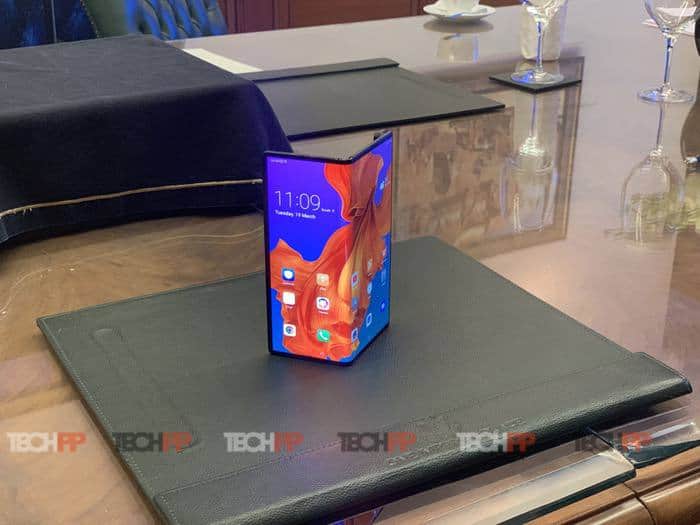 So what did I think of the Mate X? Well, it was more of a curio than a finished product. It is definitely impressively made. Huawei’s attention to detail came to the fore when it came to the way in which the display hinge recessed and the side locked into the camera unit when folded. That said, I am concerned about the use of plastic and its foldability. A lot is going to depend on how app developers make the most of this form factor – we saw a racing game that seemed to run fine on it, but these are very early days. And of course, battery life is a concern. Huawei assures us that the phone has 4500 mAh battery but just how long will it last with potentially THREE displays at work – the front, the back and the folded out one – is going to be worth a thought. Huawei is being brave in taking the foldable way, and so far seems to be one the right path. Just how well it finishes could well determine the future of foldable phones – whether it will unfold or fold up!

Was this article helpful?
YesNo
TechPP is supported by our audience. We may earn affiliate commissions from buying links on this site.
Read Next
Huawei FreeBuds 4i Review: A Well-Rounded ANC Performer for Its Price
#Huawei #Huawei Mate X