In the smartphone kingdom, brands collectively have declared a war against bezels. The tall displays and high screen to body ratios have been slowly trimming these edges out for a while now. But what earlier was a drive to push bezels out of smartphone frames now seems to be turning into a campaign against most physical buttons and ports. Sounds extreme? A few companies have been working towards achieving this goal and one of the efforts that has translated into an actual smartphone is the Vivo Apex 2019. The device has not been released officially but we did use a pre-release version of it for a short while. And well, it did give us something to think about. 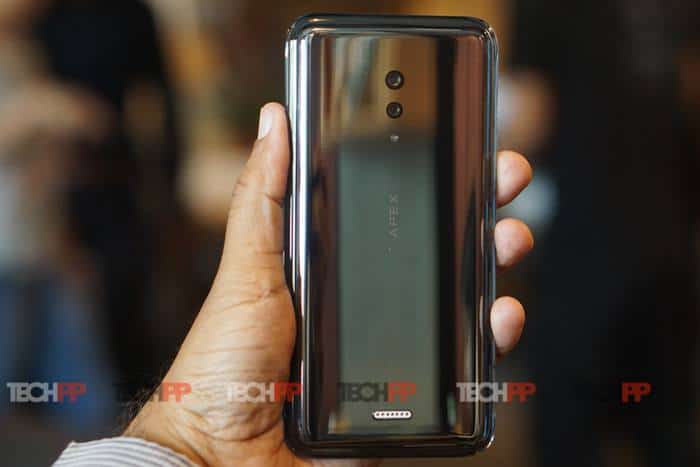 Right, let’s start out by clarifying what they the Vivo Apex does NOT have:

No physical buttons.
No ports.
No front facing camera.
No bezels (Well, almost). 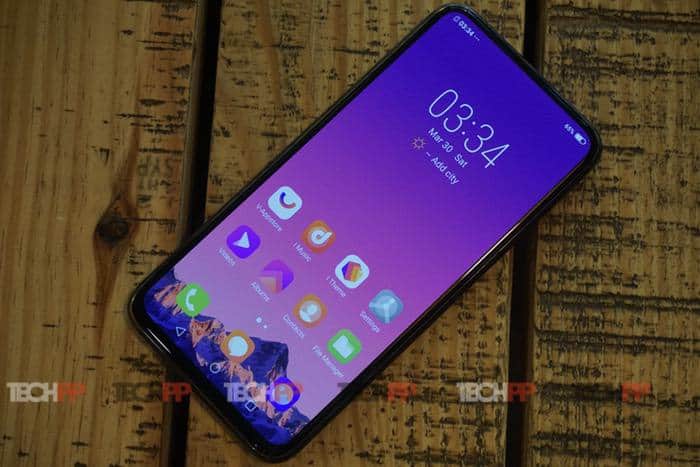 Yes, you still are reading the first impressions of a smartphone and the absence of all of these things mentioned above is what make the Vivo Apex 2019 special. The smartphone aims to offer a smooth, uniform overall feel, and well, it certainly succeeds.

It sports a beautiful 6.39 inch full HD+ AMOLED display with a screen resolution of 1080 x 2340 pixels (as per industry speculation – we had no official spec sheet, just the device). In the name of bezels, the display is surrounded by thin black lines from three sides (top, left and right) while the chin is marginally thicker – but that’s what it looks like: a display with black lines drawn around it. This is insanely bezel-less. But while there may be nothing visibly present on the front except that tall edge to edge display, there are a couple of amazing features hidden under it. For starters, the Vivo Apex 2019 comes with an all screen fingerprint scanner, which means, once you have registered your fingerprint on the device, you can touch anywhere on the display to unlock it.

ANYWHERE! And it actually works – we found ourselves unlocking the display by just touching it at any place and the experience was surprisingly smooth for a device that was a prototype.

Turn the phone around and you will see yourself, thanks to the silver metallic mirror finished glass back – shades of those Xperia phones in 2017, only with a more subtle shine. On the upper middle part of the back sits the primary camera couple of the phone with a dot-like flash following them in a vertical arrangement. A little down south from the cameras, the company has branded the device with “Apex” in white. The Vivo brand name or logo is not present anywhere on the phone.

There is a MagPort present on the lower half of the back – a magnetic port using which one can charge the device. So, all you have to is slap the charger bundled in the box with the device on this thin strip and the phone will start charging. The back curves out on the sides and the edges, which makes the phone sit very comfortably one’s hand. That said, all that glass and no smoothness has also robbed the device of friction, making it extremely slippery. Plus the back draws smudges and fingerprint stains like a moth is drawn towards a flame. 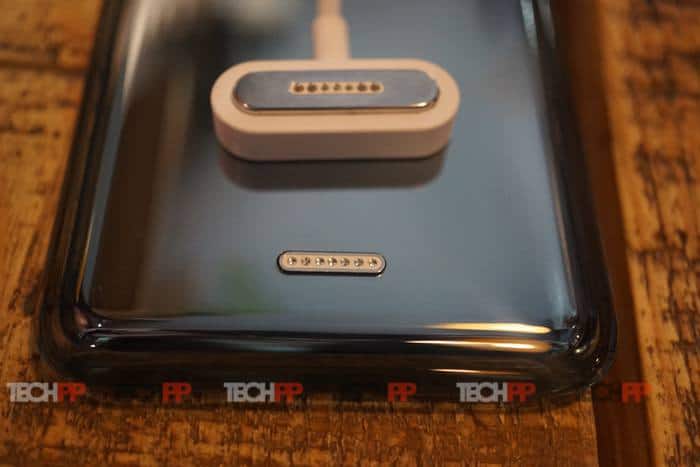 The frame of the phone is absolutely plain with zero physical buttons, ports or grilles to disturb the uniformity and smooth feels of the phone. But that does not mean it does not have features. The smartphone comes with capacitive and pressure sensitive volume and power/lock buttons that are present on the right side of the device. You will need to press them hard to make them work, though.

But what about the speaker or the earpiece? Well, remember what we said about the Vivo Apex’s display having some hides those features very well. The earpiece of the smartphone is placed under the display while the speakers are hidden under that glass back, thanks to Body SoundCasting Technology, which aims to offer sound without visible speakers. When the speakers work, you can feel the vibrations going through the phone, which feels odd – we do hope Vivo will fix it in the final version of the device. The speakers do sound loud enough but the output is a little grainy, but again, this is not the final release and we must say we like the concept of doing away with speaker grilles. While there is a lot sandwiched between that display and that back, the company, unfortunately, could not add a topping of front camera, which would have certainly made this smartphone dish more delish. Yes, this phone has no selfie snapper! 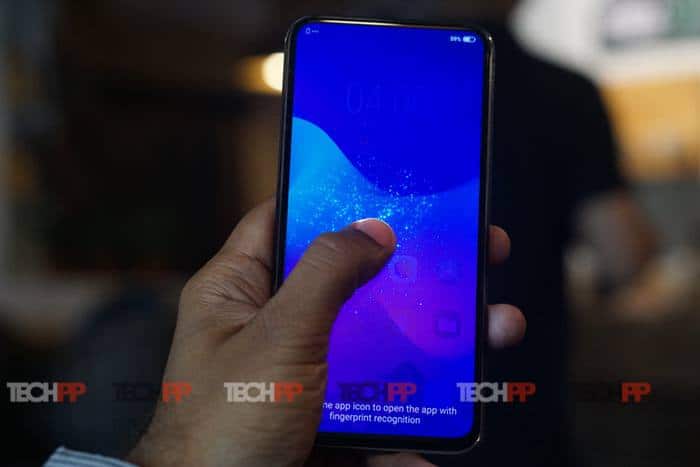 While no official documentation is available about the specs of the device, as per the information present on the smartphone, the device looks like it is a spec monster. The unit we received is powered by a 2.8 GHz Qualcomm Snapdragon 855 octa-core processor and is paired with a massive 12 GB RAM. It comes with 512 GB internal storage, which we doubt can be expanded, thanks to the no port policy of the Apex 2019.

The smartphone runs on Android 9 which is topped with Vivo’s in house Funtouch OS_5.0, and while it has on-screen navigation buttons, we think it will also have gesture support, allowing you to get an all screen experience. It also comes with support for 5G, which is a huge plus and we think it is most likely to operate on an electronic SIM card (where else can you place it). It comes with dual cameras and flash on the back. We do not know the official megapixel count but as per industry speculation, it comes with a combination of 12 megapixel and 13-megapixel sensors with LED flash – our unit had a bare-bones camera app with no features whatsoever. The phone does not bring a front-facing camera to the table. The battery count of the phone is also officially unknown but many would have us believe that it comes with a 4100 mAh battery with support for fast charging. The phone did heat up uncomfortably a few times, but then, hey, this type is a proto!

Not complete, not perfect but fascinating! 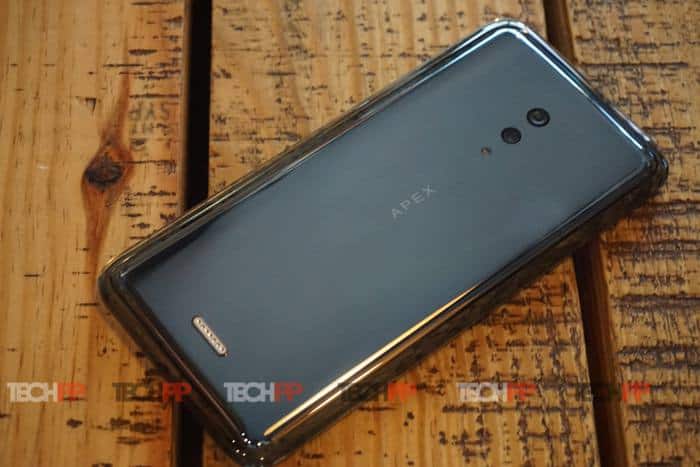 Yes, there are still a lot of pieces missing from the Vivo Apex 2019 puzzle but the picture created so far looks interesting. It might not be as eye-catching as the folding phones from Huawei and Samsung, but there is no doubt that the Vivo Apex does have its fascinating sides – the total absence of ports (which might result in better water and dust resistance, although we do not know if the charging strip on the back is water resistant), the speakers under the surface and of course, the place-your-finger-anywhere-to-unlock display. Of course, all that spec power (rumored and factual) along with all the design wizardry that the Vivo Apex brings along, is very likely to come with a premium price tag. Based on our experience, we do not know whether the Vivo Apex 2019 is the future of smartphones but it sure seems like it could be a solid step towards it in terms of some features.

The next port of call for smartphones could have no ports.

How cool is that?

Was this article helpful?
YesNo
TechPP is supported by our audience. We may earn affiliate commissions from buying links on this site.
Read Next
[Face Off] Vivo T1 vs Redmi Note 11
#First Cut #First Impressions #Vivo #vivo apex #Vivo Apex 2019