Making a name for yourself and emerging as a contender in a smartphone market in India is no mean task, but it is one that Realme has managed to do in less than a year. The brand has outgunned the likes of Motorola and Nokia to emerge as one of the top five names in the Indian smartphone market. So much so that many consider it to be the real challenger to Xiaomi, the current numero uno in Indian smartphones. And this is because Realme is perhaps the only brand to have successfully replicated Xiaomi’s “great specs and experience at an affordable price” formula – all of its devices boast decent design and good hardware and none of them start above Rs 15,000. And the Realme 3 is cut from the same cellular cloth! 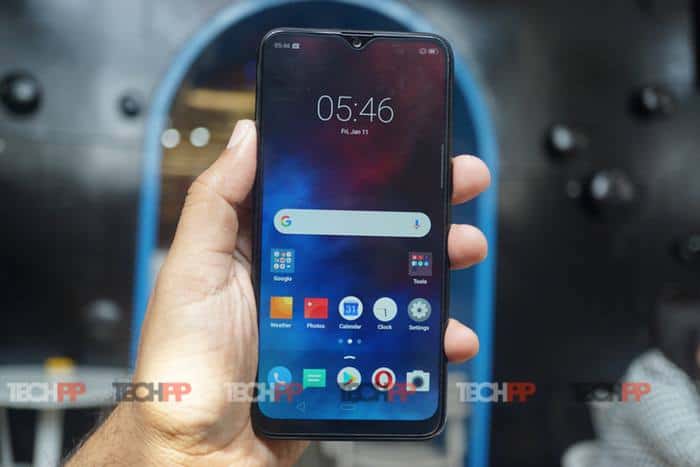 It does not cost a bomb, but the Realme 3 does come with flauntable looks. They might not be to everyone’s taste, but there is no way in which you can say that this looks like a budget smartphone. The front is all about a 6.22-inch display, protected by Gorilla Glass 5 and complete with the drop notch that is the trend these days, and bezels that are very slim, although the chin of the device is a bit on the thicker side. However, it is the back that is the real star, as it comes with a gradient finish that many phones sport, giving it an almost glass-like appearance, with the fingerprint scanner on the top half next to the vertical dual camera arrangement. Which, of course, brings up something that might be a sore point with some – the back is plastic and not glass. We do not think it is a deal breaker in any way to be honest because it looks very classy. The overall design of the phone is very good and at 8.3 mm, it is impressively slim. It is slightly on the heavy side, at 175 grams, but we feel it has a nice solid feel about it. There is no way in which anyone can think this is a phone that comes with a price tag of Rs 8,999. 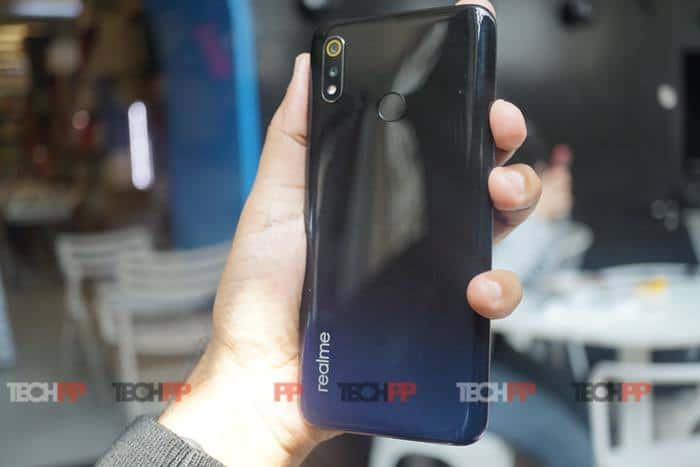 In terms of specs, the Realme 3 ticks most of the boxes that you would expect in a phone at its price point. It is powered by a MediaTek Helio P70 processor, which is a pleasant surprise, when you consider that this is the same chip that is seen in devices that cost much more (the Oppo F11 Pro, for instance), and comes with 3 GB RAM and 32 GB storage and 4 GB RAM and 64 GB storage variants – the storage can be expanded to 256 GB RAM via a microSD card, for which there is a dedicated slot in the device. Connectivity options include Wi-Fi, GPS, Bluetooth, and 4G, and there is a micro USB port for powering the device (again this might disappoint some, but we do not think it is a deal breaker at this price point).

Now, as we have mentioned before, the Helio P70 is a very competent processor, falling in terms of performance somewhere between the Qualcomm Snapdragon 636 and 660, and it certainly delivers a very steady performance. No, you are not going to be able to play PUBG with settings maxed out without frame drops, but if it is casual gaming and multimedia-tasking that you are looking for, this phone will sail through it without breaking into a sweat (no, it does not even heat up). The fingerprint scanner works very smoothly – much more smoothly than some in-display scanners we have had to deal with, and Realme has also thrown in the option to add face unlock to the phone. It works smoothly enough, but we would recommend you use it with caution, simply because it ended up unlocking the phone even when our eyes were closed! 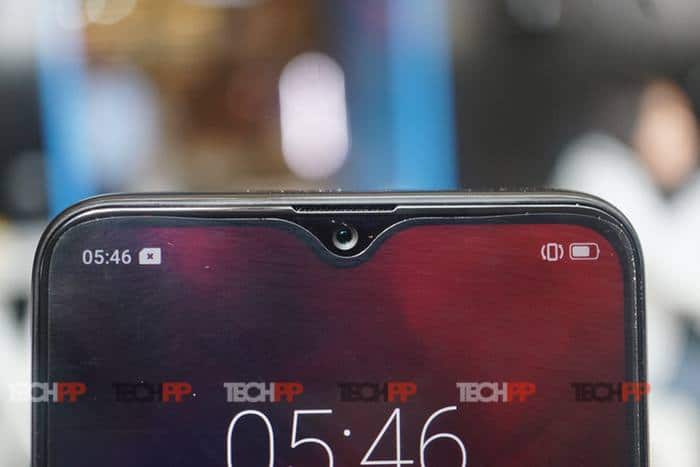 The Realme 3 runs on Android Pie (9.0), which is laudable given how many devices at this price try to make do with older versions. Like other Realme devices, this one too comes with ColorOS 6.0 (the UI seen on Oppo phones), which some might like and some might not. We are not too sure at this stage, as we feel that it is not yet in the league of the likes of EMUI and MIUI and puts too many third-party apps right out there. Newcomers and stock Android fans might take some time getting used to it – it is feature rich but is a little clustered.

A real sore point though is the display. The 6.22-inch display has only an HD resolution of 1520 x 720, which is surprising when you consider that there are devices that cost slightly more (the Redmi Note 7 being the most prominent) but bring a full HD+ resolution to the table. What’s more, the display on the Realme 3 does not compensate by being bright or having great color production – it is a bit on the dull side and is not easily readable in bright sunlight.

The cameras rock it… 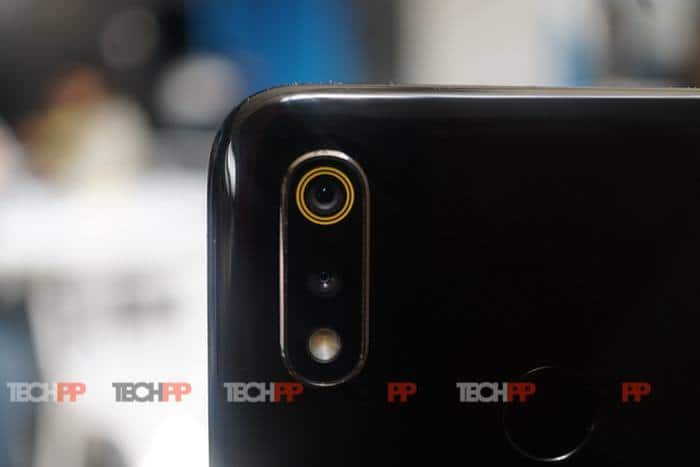 But if the display is a bit of a letdown, the cameras on the Realme 3 are certainly not. Realme has a great reputation when it comes to camera performance, and the shooters on the Realme 3 certainly add to it. The phone sports a dual camera arrangement, with a 13-megapixel main sensor (with a large f/1.8 aperture) and a 2-megapixel depth sensor, at the back and has a 13-megapixel front-facing camera. And as long as light conditions are good, you are assured of some very good photography indeed. A point of particular note is the color reproduction – most Chinese brands do tend to go a little overboard in this department, making colors extra bright and loud, but the Realme 3’s shooters are remarkably realistic.

The cameras also capture a lot of detail and there are shooting options aplenty in the camera app. The big point to remember however is that all this applies only when the light is decent. The low light performance of the cameras is not quite the greatest but expecting more at this price point would be unfair. The 13-megapixel selfie camera is very much like its rear counterparts – it is a very good daylight performer but struggles in low light conditions. All said and done, the cameras are among the best at this price point.

…and so does the battery

The cameras are the stars of the Realme 3 but are given a very close run by its large battery. The phone comes with a huge 4.230 mAh battery, which is quite a feat when you consider how well designed and slim the phone itself is. And it is not a paper tiger. It actually will see you through a day and a half of normal usage (mail, browsing, social networking, et al), and if you are a bit more careful, you could even get through two days – the lower resolution display helps, we think. There is, however, no support for fast charging (no complaints given the price), so be ready to spend close to three hours to charge the phone from empty to full. 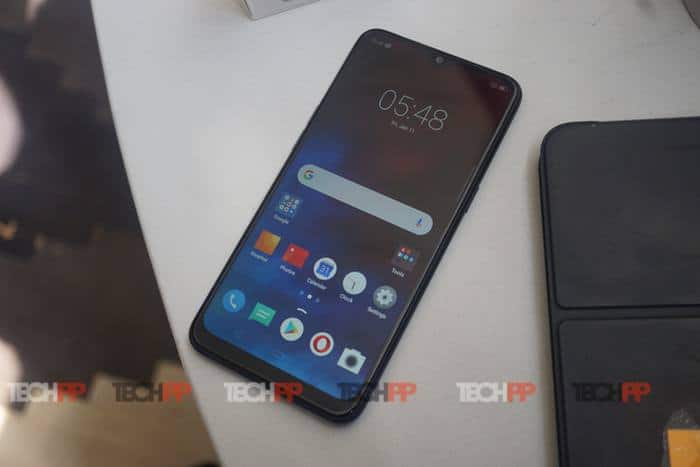 The Realme 3 comes at Rs. 8,999 for the 3 GB/ 32 GB variant and 10,999 for the 4 GB/ 64 GB variant. And at that price, it goes right up against Xiaomi’s Redmi Note 7 (Rs. 9,999 for 3 GB/ 32 GB, Rs. 11,999 for 4 GB/ 64 GB), which does not match it in the camera department but comes with a glass back and full HD+ display – you can check our comparison of the two devices here. Also lurking in those waters is the Asus Zenfone Max Pro M1, which might be a little long in the tooth but still packs in a decent processor and great battery life. If, however, you are on a tight budget and are looking for a device that looks smart and comes with very good cameras and excellent battery life, then the Realme 3 is definitely one of the main contenders for your phone space.

Review Overview
Was this article helpful?
YesNo
TechPP is supported by our audience. We may earn affiliate commissions from buying links on this site.
Read Next
iQOO 11 5G Review: Does It End Your Quest for the Ultimate Smartphone?
#Realme #Realme 3 #review