We have commented in the past on Xiaomi’s newfound penchant for releasing products that seem to compete with each other. And the recently launched Redmi Y3 continues this tradition. The selfie centric phone is priced at Rs 9,999 for the base variant. Yes, it does have a fair deal of competition from other brands, but perhaps its biggest challenger is its own cousin, the Redmi Note 7. The Note 7 might have been a little overshadowed by its 48-megapixel toting Pro sibling, but it remains a formidable proposition and actually starts at the same price as the Y3. 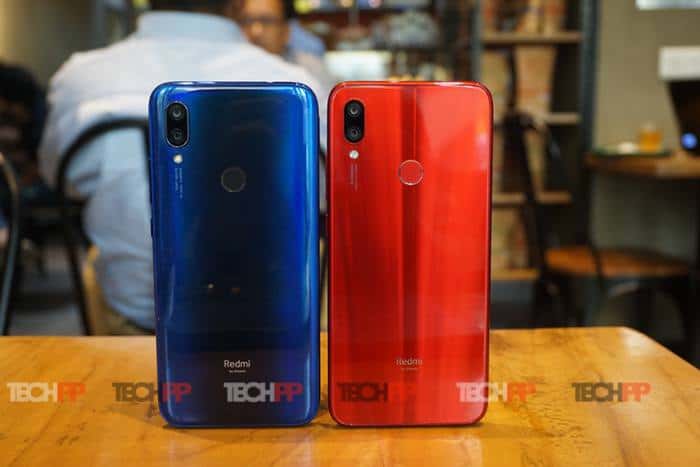 So which of the two Redmi devices is the one for you? Here is a rather quick comparison to help you make up your minds.

Their mum might be Redmi, but the Note 7 and Y3 follow very different design aesthetics. Yes, both have displays with drop notches, but the Y3 has a more curve-y back while the Note 7 has a relatively flat one. Both have different versions of the Aura finish, but although the Y3 is not an eyesore, we think the Note 7 seems just a little more premium thanks to the use of Gorilla Glass 5 on the back (the Y3 has a carbonate back). It is also slimmer at 8.1 mm as compared to the 8.47 mm of the Y3, although it is slightly heavier as well (186 grams to 180) and longer as well (159.2 mm as against 158.73 mm). Both phones are also splash resistant and come with P2i coating. It is a rather subjective call, but then looks always are, but we are going with the Note 7.

…oh, and the display as well … 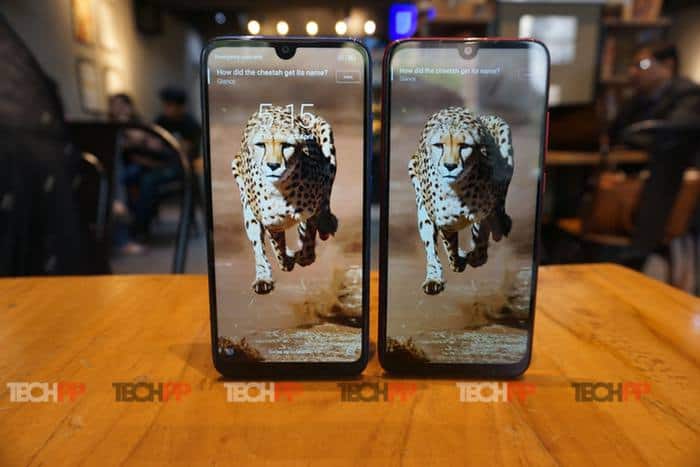 One of the key areas in which the Redmi Note 7 outguns the Y3 is in the display. The Note 7 has a full HD+ display of 6.3 inches while the Y3 has an HD+ one of 6.26 inches. Only one winner here.

…add the chip to the Note-edges!

The Note 7 is also seen by many to have the better processor – a Qualcomm Snapdragon 660 – as compared to the Qualcomm Snapdragon 632 on the Y3. Yes, the 632 is perceived to have better power management, but in terms of sheer processing muscle, most people feel that the Force is strong with the Note 7. Gaming enthusiasts are more likely to flock to the 660 rather than the 632 (the full HD display adds more weight to it), we suspect, although both chips have rock solid track records.

Both phones come with 3 GB/ 32 GB, and 4 GB/ 64 GB variants, but they differ in terms of external storage. Yes, they both have microSD card support, but the Y3 has a dedicated card slot while the Note 7 will make you choose between a SIM card and a memory card, thanks to its hybrid SIM set up. Also, while the Y3 can take a 512 GB card, the Note 7 tops off at 256 GB. The Y3 has the bigger byte when it comes to external storage.

When you have similar rear cameras… 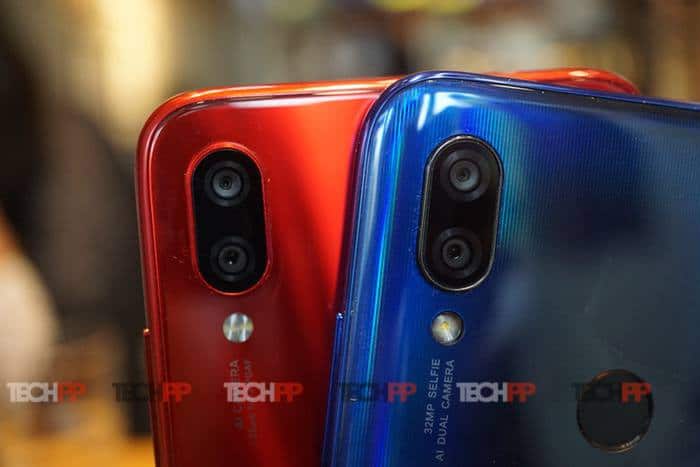 Y not go for a better selfie camera? 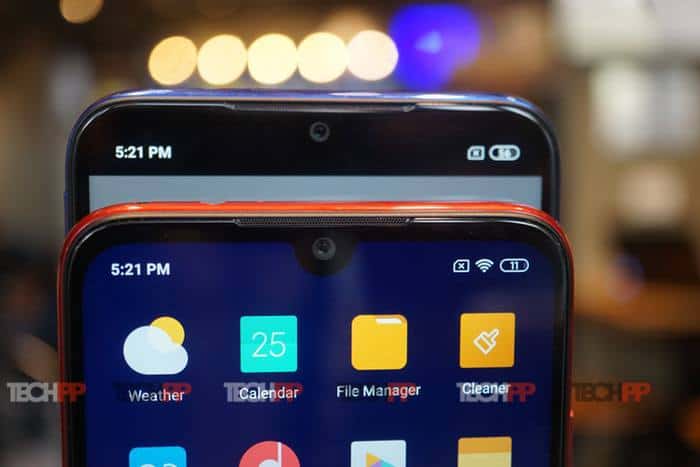 But if the rear cameras are even Stevens, the selfie cameras are very different kettles of fish. And that is hardly surprising when you consider that the Y3 is actually positioned as a selfie camera phone – it comes with a big 32-megapixel selfie camera, which pretty much dwarfs the 13-megapixel one on the Redmi Note 7, although the Note 7 does have a larger aperture (F/2.0 as compared to f/2.25).

Y not connect with a dedicated SIM slot…or Note a USB Type C?

When it comes to connectivity options, both phones tick off the usual boxes – 4G, Wi-Fi, Bluetooth, GPS and both also sport 3.5 mm audio jacks. Where they differ is in how they connect to power outlets – the Note 7 has a USB Type C connection while the Y3 sticks with the micro USB port. And well, thanks to its dedicated microSD card slot, the Y3 allows you to use two SIM cards AND a memory card at the same time – a luxury the Note 7 does not have, as it comes with a hybrid SIM slot option. 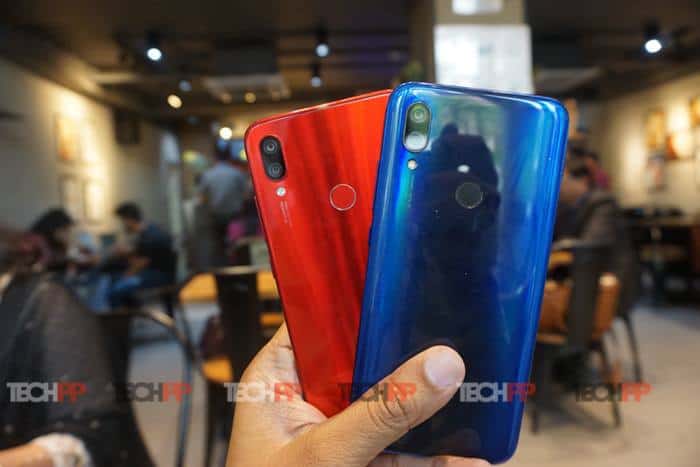 When it comes to batteries, both phones pack in similar numbers. Both have 4000 mAh batteries, and you would think that the edge would be with the Note 7, which comes with support for Quick Charge 4. However, you will have to purchase a charger separately to get that charging speed. We also suspect that the Y3 might actually last longer on a single charge, as it does have an HD+ display rather than a full HD+ one like the Note. The Snapdragon 632 is also the successor of the Snapdragon 625, which was known for its power management – another reason to suspect that the Redmi Y3 might actually outlast its more glassy sibling.

Note? Y? For self or selfie? 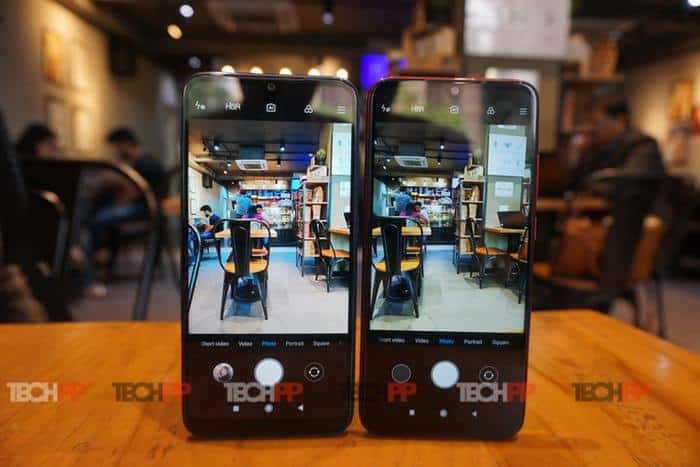 So which should you go for? Well, honestly, if selfies matter, the decision is a no-brainer – the Redmi Y3 is a winner by a mile. However, if selfies are not THAT important, then matters get interesting because the Redmi Note 7’s slimmer glass build might appeal to quite a few users, as would its higher resolution display, reportedly more powerful Qualcomm 660 processor and USB type C port. It is not that simple, though – the Y3 does bring a dedicated micro SD card slot (with more storage capacity as well) to the table and is likely to have better battery life. We think the Redmi Note 7 is on paper the more balanced device, but then the Y3 was meant for the selfie masses. Both are fairly good deals for the price they command.

Was this article helpful?
YesNo
TechPP is supported by our audience. We may earn affiliate commissions from buying links on this site.
Read Next
Snapdragon 782G vs Snapdragon 778G Plus: What Has Changed?
#comparison #Redmi Note 7 #Redmi Y3 #xiaomi