The wait is finally over! As OnePlus has today officially announced the most-talked-about smartphones for the year, the OnePlus 7 and OnePlus 7 Pro. Even though there were a lot of rumours, leaks, and renders surfacing all over the internet since the past few weeks, one can only know so much until the event is over. And this time around, OnePlus decided to go overboard and launch one of their most-hyped devices simultaneously, at different parts of the world including the UK, US, and India. Not to mention, China, which has the launch event slated for May 16. 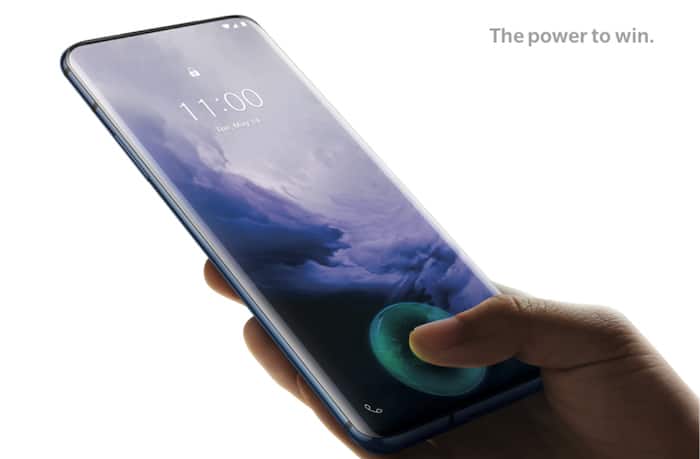 Of the two smartphones, the OnePlus 7 and OnePlus 7 Pro, the OnePlus 7 Pro gets a radical design change, with a higher screen-to-body ratio, bigger display, no notch, and almost zero head and chin on the top and the bottom. On the back, it has a similar glass design found on the previous generation of OnePlus devices. However, it is the front of the device, where things begin to get interesting.

The OnePlus 7 Pro comes with a 6.67-inch AMOLED display, that OnePlus calls ‘Fluid AMOLED’, with a 19.5:9 aspect ratio, 3120 x 1440 pixels QHD+ screen resolution, 516ppi pixel density, and 90Hz refresh rate. The display offers a few additional enhancing features like Video Enhancer, Reading Mode, and Night Mode, which work just like they sound. Another interesting feature with the device’s display is the Horizon Light, which is basically a trace of blue light for notifications that appears right around the device when the display is off. The OnePlus 7 Pro comes in three new interesting colour options that include Mirror Gray, Nebula Blue, and Almond.

Coming to the core, OnePlus devices have over the past few years, created a reputation for delivering high-performance devices that offer a complete blend of everything. And evidently, that is one of the most obvious reasons for a lot of people going out and buying a OnePlus device. And to continue the trend and live up to the customers’ requirements, OnePlus has included a 7nm-based 2.84 GHz Octa-core Qualcomm Snapdragon 855 processor with Qualcomm AI Engine and Adreno 640 GPU on the new OnePlus 7 Pro. That follows up with 6 GB/8 GB/12 GB of LPDDR4X RAM and 128 GB/256 GB of UFS 3.0 storage options to choose from. For authentication, the company has continued the trend of the in-display fingerprint scanner, introduced with the OnePlus 6T, and included it on the all-new OnePlus 7 Pro. The device runs on OnePlus’ OxygenOS based on Android 9.0 Pie and is powered by a 4000 mAh battery with Warp Charge 30 Fast Charging. Additionally, it also comes with a Liquid Cooling system to manage the temperature and battery of the device while performing heavy tasks or gaming.

Coming to the camera, over the past few years, a lot of the OnePlus devices have managed to significantly improve the image and video quality produced by their camera. And at large, have quite nearly gotten up to the mark where they can be compared with the likes of some other top-tier smartphones. With the OnePlus 7 Pro, the company aims to extend that further while introducing a new way for people to take selfies.

On the front, the OnePlus 7 Pro sports a pop-up selfie camera, the first one a OnePlus device, which the company claims to have been tested over 300,000 times. The pop-up camera includes a 16MP Sony IMX471 sensor with 1.0 μm pixel size, f/2.0 aperture, fixed-focus autofocus, and EIS. Other features include HDR, Screen Flash, and Face Retouching. In terms of video, the front camera on the OnePlus 7 Pro is capable of shooting in 1080p at 30 fps, in addition to time-lapse videos recording.

The OnePlus 7 Pro is offered in three RAM + storage configurations: 6GB + 128GB, 8GB + 256GB, and 12GB + 256GB and is priced at Rs 48,999, Rs 52,999, and Rs 57,999 respectively. The Mirror Gray colour will be available starting May 17 while the Nebula Blue starting May 28 across Amazon India, OnePlus website, and offline stores. Whereas, the third colour option, Almond, will be available later this June. Customers can purchase the OnePlus 7 Pro at the limited stock pop-ups in Bangalore, Mumbai, Delhi, Hyderabad, Chennai, Pune, and Ahmedabad starting 7 PM IST on May 15 and the OnePlus Experience Pop-up in Delhi starting May 17.

Was this article helpful?
YesNo
TechPP is supported by our audience. We may earn affiliate commissions from buying links on this site.
Read Next
OnePlus Nord Watch vs Amazfit GTS 2 Mini New Version: Which One Should You Buy?
#oneplus #OnePlus 7 Pro