Wanted: the OnePlus 7 for the attempted murder of the Pixel 3a

It was the confrontation many had been looking forward to since the beginning of the month. When rumors of a new OnePlus and a “lite” and more affordable edition of Google Pixel hit the rumor mill in March, there was intense curiosity about how the devices would compare. After all, many considered OnePlus to be the ultimate budget Android flagship, especially since Google had gone into the premium mode with the Pixel series. However, when whispers came in that Google would be introducing a more affordable Pixel series, everyone was curious about how it would compare with the new OnePlus.

Well, both Google and OnePlus have shown their phone-y hands now. And although the reviews of both devices are underway with us, it is becoming increasingly apparent that OnePlus has – yet again – thoroughly unsettled the phone arm of the Search giant.

If that sounds excessively unfair, cast a glance at the prices of the devices launched by the two brands over the past couple of weeks: 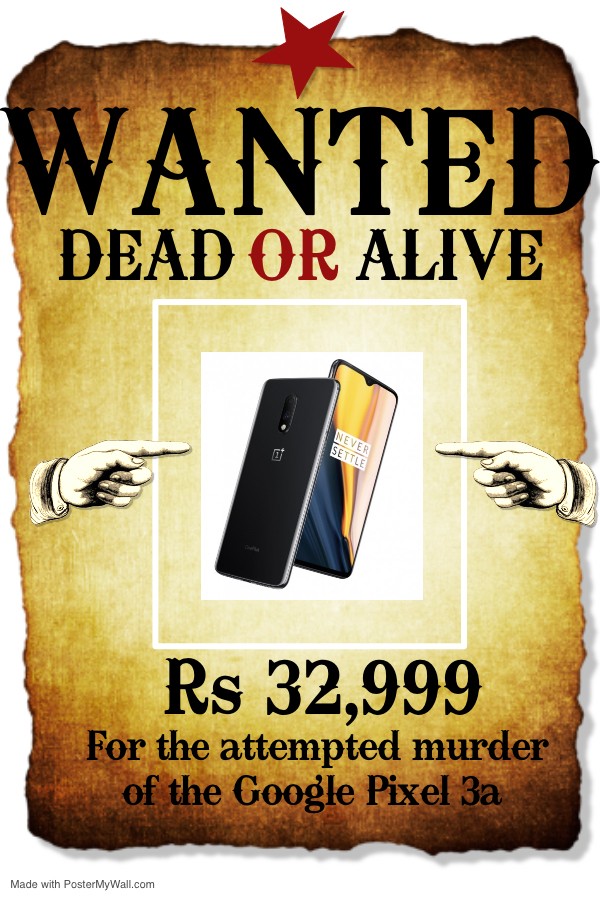 When the Pixel 3a series was launched, we were flooded with queries about how it compared with the OnePlus 6T (the 7 had not been launched). We obliged with a quick comparison, and our conclusion was simple – the new Pixel did have a camera and software update edge, but when it to other factors, especially hardware (RAM, storage, processor, display, pretty much the works), the OnePlus 6T pretty much bossed it. And it even came with a lower price tag – Rs 37,999 as against the Rs 39,999 of the Pixel 3a.

Well, now the successors of the OnePlus 6T have been revealed, and that hardware difference has been widened considerably. Some will point out that the magnificently specced OnePlus 7 Pro costs more than both the Pixel 3a and 3a XL (check our first cut), but then consider the OnePlus 7, which costs lesser than either Pixel and STILL packs in a Snapdragon 855 processor.

Have the new OnePlus devices eroded the Pixel’s camera and software edge over its predecessor? From what we have seen so far, we doubt it, but that camera gap has been closed to an extent by those 48 megapixel main sensors, and knowing OnePlus, the camera firmware will keep improving, although we are not too sure it will ever give the Pixel sleepless nights. As to software, OnePlus has never been too far behind the Pixels, with its Oxygen UI being one of the cleanest and least intrusive Android overlays, with a very good (some would say “good to the point of being irritating”) update record. At the time of writing, both phones ran on Android 9, had very little bloatware and both were assured Android Q updates in the foreseeable future.

In sum, the new OnePlus devices have narrowed the areas where their predecessor trailed the new Pixels, and have further extended their own advantage. And one of them even has a killer price. All of which makes one feel a little bad for the Pixel 3a, whose biggest sin seems to have been to surface at around the same time as the new OnePlus. We have not ventured into doing a comparison between the new OnePlus devices and the Pixels simply because the Catching up Casually was morphing into Bashing up Casually.